This was the last race of the series and one of the 'short' ones. Not a whole lot longer than a marathon really, well, only another 8km! I travelled down the day before did a steady 10miles with Natasha
and met up with the gang for a good feed, I settled for a lasanga and a large pizza, one or 2 slices survived and became the pre race breakfast! After a quick look on the championship table beforehand
I realised that I would have enough races to qualify for the championship and could potentially become 3rd overall after my previous win at the Peaks 40mile ultra. Training had been going well leading
upto the event, a hilly half marathon and a 10k race the previous weekend along with a few speed sessions here and there for good measure.

The race was smoothly organised, typical for an ULTRArace event. Meeting the bus at the finish line on the morning of the race and the bus whizzing us all up to the start line in Blidworth just north of
Nottingham following the Robin Hood way for a large chunk of the route! We all collected our numbers and had a bit of last minute breakfast in the form of a 9bar, before lining up at the start ready for
'battle' it looked a little like a scene from Braveheart as 108 runners spread across the start line.
After a quick pre race briefing we set off at a steady pace although I don't really pay much attention to what is behind me but there was 2 runners infront of me that I kept up with quite happily as we moved steadily along the course.

Shortly before the first checkpoint 2 chaps caught me up with quite an enthusiastic pace down a small hill though their pace slowed back down on the flat and I moved past once more. I passed the first checkpoint swiftly, there was a lot of support and encouragement from quite a lively CP! After travelling around a country lane following the tape and UR stickers I turned up a small path to hear a runner behind shout 'Hey its this way'. I shouted back something along the lines of 'follow the signs' as I was on the right path.

Quickly arriving at the 2nd CP which Jen had under control I passed through quite swiftly and we moved through some woods where I caught up with the leader Mark Davis, who was familiar with the area being relatively local but wasn't feeling 100%.We chatted for a few minutes and the path entered some more open fields before hitting Kimberly. I moved on ahead to the next CP which was just on a short road section.

There was an incredible amount of excitement which was great to see as I grabbed a handful of gummy sweets and carried on at a comfortable pace.The course was straight forward to follow then I came to a bit of a trickier section nearing CP4 still managing to follow arrows through another wood before spotting the CP at the bottom of a small grassy hill and moving swiftly through not really needing to stop for anything, so, I didn't.

The final 10k cut through some houses and into a park, there was a long straight section down a tunnel of trees after skirting around Wollaton Hall which could have made a good postcard! There was a short section down a main road to the canal which was then to be followed until about 2km from the finish.I relaxed a little by now as I didn't expect anybody to be all that close behind. My mum had come down to watch the finish and for a weekend away so i gave  her a quick call saying I would be up at the castle in about 10mins. Just then I heard something coming up behind me, just as I was about to wake up from my lazy pace and pull away I realised it was a cyclist who informed me there was nobody behind. I turned off the canal and followed the last km or so to the road leading slightly uphill to the castle.

I reached the line to see Rory and Jen along with the folks at 9BAR and Jo Kilkenny along with some other families waiting for their runner to get home! Final time was 3hours 43mins averaging about 4.20 something per km and around 20mins clear of 2nd place apparently 10mins quicker than the previous years course record. 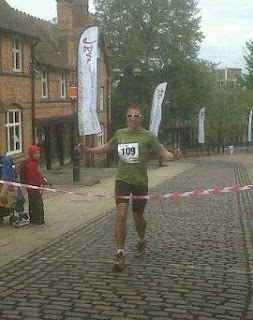 It's quite a quick course no major hills to worry about and it was pretty well marked too!

After the race then the fun and games started!! I was hitching a ride home with mum who decided instead of bringing the car over to the castle and using the free parking, left the car on the other side of Nottingham. About 25mins after I finished I noticed she had vanished, I gave her a call and told her to come back for the presentation for the end of the Champs. Instead of bringing the car, she somehow drove it further away rather than closer to where the finish was and parked it in a side street to prevent getting lost driving into the one way system. Only problem being she didn't remember the road name or any nearby features and left it in a 'home made space' IE not a propper spot!

The result.... I had to jog up and down each street systematically until I found the car with a big fat parking ticket on it for creating a space! What a day!!
Results below