Hell Runner, for anyone who hasn't experienced it yet, is basically an off road running race in the region of 10-12 miles incorporating a couple of swamps and bogs, as many short sharp hills as the venue allows, a bit of technical trail running and on this occasion ICE! 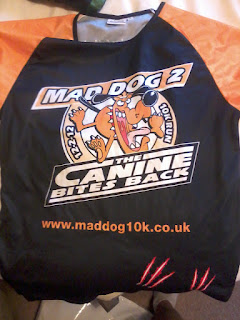 Went down to Cannock with a friend Christian Roach, both all the more enthusiastic about the early start when we felt the temperature outside! At the venue the sun was shining although the temperature still hadn't quite nudged over 0C. We had a quick look around the start area and a warm up jog before becoming lost in the crowds. The start finish area was a little cramped between the baggage marquee and some trade tents making it a bit difficult to move around but we coped! Bumped into Ria Bright who had gone to all the effort of getting me a birthday present!!! Thanks for that! 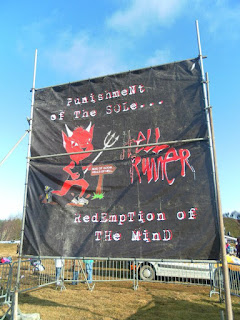 Everyone huddled into the start line ready for the slightly delayed start, I think it was deliberate to ruin any attempts to warm up. Some very competitive looking chaps around and from the start a small group of us pulled away down hill towards the first short sharp hill, the kind of gradient you can just about run up. A few lying branches and patches of ice to contend with I found myself in the top 5 as we began to thin out a little, there was a small loop about 1 mile before passing by the start finish area and heading off across the forrest on a long track, mainly covered in ice making traction when you're trying to run fast a wee bit difficult.
http://www.21cphotos.com/i_gallery.php?gallery_id=2725#
I can be seen on the 4th and 5th image of the middle row, the water was about to get a lot deeper!


The course seeked out every short sharp hill within a 3 mile radius of the start line, occasionally detouring into some wicked single track twisting and turning through the trees (up and downhill of course). I was really enjoying the single track although my legs were 'a bit heavy' (ie stiff as!) after my 3 days 'holiday' in the Lake District the previous 3 days. After a while we passed a swamp kind of rectangular that was around 60m long with tape at the far end to funnel us in, except this time we were only running past, that was saved for later, just a quick glimpse of it now to torment any tiring runners. More hills and a very twisty section in the dense woods where I managed to build up a good gap with the runner behind (I could no longer hear him breathing or his footsteps pounding down the hills at least). After that I came to a track with an arrow pointing right..... great!  but which right is it? Is it right on the main track or right on the single track? The runner behind caught up, I shouted 'If you know the way jump infront 'cos Im guessing!' I scrambled up over the mound in the middle and decided to follow the main track after about 30seconds I spotted the next arrow so picked the pace back up leaving said runner.
Out into the open again and we turned, in the distance there was the 'Bog of Doom!' during Hell Runner at Delamere I had a nice leisurely wade through the bog as I had a substantial lead, this time however I ploughed on through straight into the ice. The shins took a bit of damage but the legs were pretty frozen after about 60 seconds of wading. This was roughly 13km. I was expecting another 5km then I would be finished. The runner behind was close again but as soon as I noticed him behind I moved away again as we hit the track heading back towards the finish, one last diversion into the woods and I figured unless there was another surprise loop before the finish we must be almost done? With that I sped up a bit and pushed on to the finish which gave me a total of 15.1km about 2 miles shorter than I expected which was a surprise!

I finished in 5th, 1.11 for 15km which was a little slower than I would have liked but considering the  pre fatigued legs I was quite happy! Had a bit of a shoe issue with some Adidas trail shoes... one of the rubber knobbles in the tread pushed through the sole into my foot creating a nice sore patch, under the ball of my foot, which I wasn't overly happy about.
﻿﻿

After a quick change I proceeded do dig through the goody bag for any item that was edible and chatted to a few people here and there whilst Christian was now in the finish line funnelling system which had started to fill up. For someone who isn't a keen runner and entered for a bit of a laugh not bad at all!! Home via a pub for birthday lunch (thanks mate!) and ready for Sunday
Mad Dog 10k Southport!
Its 2nd year and already proving to be a very popular road race. Last year an incredible headwind gave me a finish time around 41mins which turned out to be about 8th position off the top of my head. This year a little bit of a dull day but no gales.
The legs didn't feel much worse after Hell Runner, although my shins were a little sore from breaking ice with them. The venue was pretty full of people collecting T shirts etc I managed to bump into my little brother doing the fun run 1mile with his pal and also one of my clients, Diane who tries her best to arrange her runs with bad weather!
As we all squeezed out of the start and off towards the Coast road there was probably around 100 people infront of me. I began to edge past a few, the traffic free roads were nice although there wasn't much in the way of scenary. Quite a few runners passed me back maybe around 20 up until the water station at half way, I passed half way in around 20mins and began to pick the pace up, moving my way up the field gradually.
Nothing all that exciting to report, im not going to write a lot about a 10k road race, I rolled in 38mins and some seconds 34th out of the 1120 finishers. Not my quickest but with the continuing trend of tired legs over the previous 5 days, quite happy with that!


Diane did brilliant! Smashing her previous pb by over 5mins and blowing the 50minute target out of the water! Coming in at 48mins! She has been training hard and putting in a lot of effort which shows in her results! Champion!