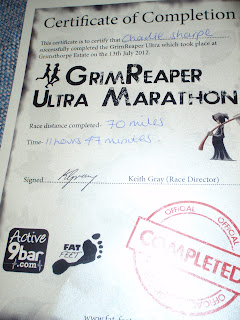 I decided to enter this just a couple of weeks ago and use it as a 'warm up' for some races coming up in the next couple of weeks taking it at a relaxed pace just plodding around. The course is based on a 10mile loop in the grounds of Grimsthorpe castle just south of Grantham somewhere near Bourne (not too far from the Viking Way finish). The course is pretty flat with nothing you could really justify as a hill (and where I live a motorway bridge is about as close to a hill as I get!) around about 135m of elevation for 10 miles. About half the course is on tarmac and the rest being divided between hardpack farm track type ground and grass turned mud as the race progressed.

I wore road shoes and aside from one small inclining section around 200m long which was a bit slippery in places and required small steps, all perfectly runnable. There was light rain for most of the day with a few brief dry spells (I didn't have my sunglasses on which is unheard of) after a lap or 2 the grass paths became wetter and wet feet were pretty much a given, had wet feet since the first grass section on lap1 but never bothered messing about changing socks etc as they would only have got wet again. 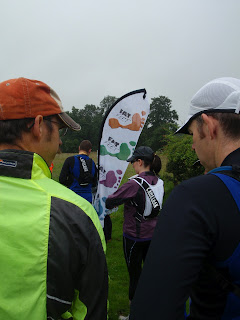 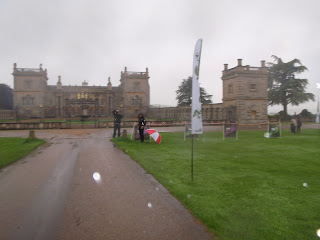 During the race I  had 3x 9 bars, 1 pack of electrolyte sweets, 3 nuun tabs, a pack of crisps and a handful of jelly babies. Drink wise I had about 500ml of water during the first 30miles then about 3/4 litres after that. Although it was raining I never used a jacket as I was a good temperature the rain keeping me cool. 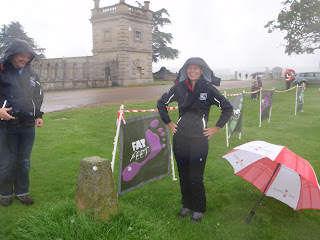 At the start we had 1 k tarmac section leading upto the castle. I waded through to the back of everybody at the start as I was planning on a relaxed pace, the photos came from the 1st lap mostly. We started about 9am and there was a very cautious pace for the majority of people I guess there was between 75 and 90ish  runners on the start line split between 3 event distances? Within the 1st km I weaved my way through to the front where 9 bar runners David Miles and Richard Kell (both running the 100mile distance) where leading the entire field (including runners 'only' doing the 40 or the 70) we ran together for a while and shortly joined by a chap called Andy also doing the 100 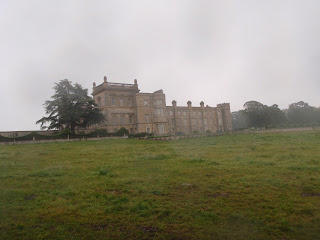 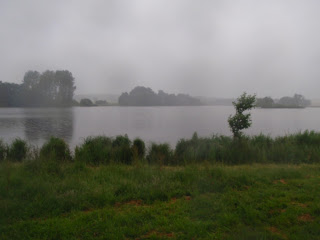 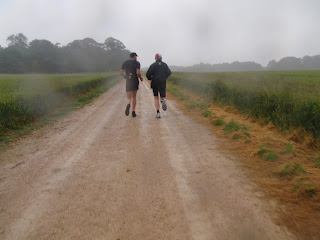 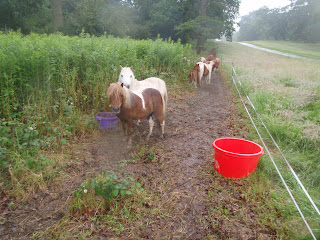 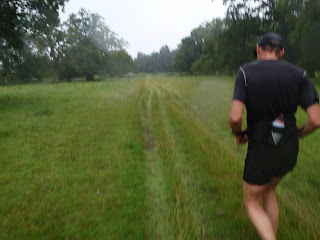 The picture below is about 6km around the lap and looking back there was a significant gap behind the 4 of us already. We were all running pretty casually and it was good to chat away the first lap or 2 before spreading out a little. There was 1 checkpoint on the lap where you could get water and food and also had to have your card stamped. At 2 other points on the course there was a little stamp tied to a flag that you had to stamp your card with to prove you went around the course and didn't take short cuts etc. 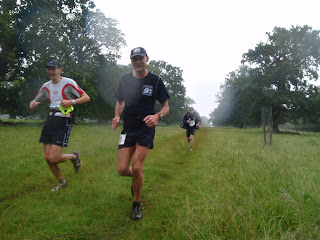 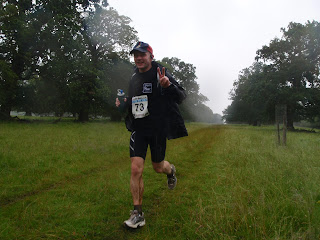 Basically just kept plodding around the course getting wetter each lap, I began lapping people on the 3rd lap which gave someone to chase and chat to. The friendly banter between runners was good and there was lots of support at the checkpoint giving the event a good atmosphere despite the dull weather. The grass sections such as the photo below had water lying on them and were getting slippery and rutted which didn't make things any easier. Saying that I did stick with road shoes for the entire run and at such a steady pace they weren't a problem. 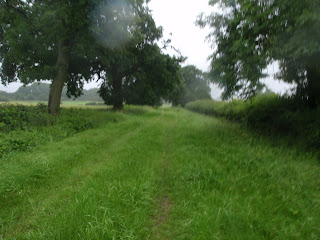 As I was nearing 50miles I caught a chap who was running the 40mile and with a couple of km to go was looking like he could perhaps scrape 8 hours when I caught him we ran together and pushed each other along to finish the lap on 8 hours. With 20 miles to go and about an 80min lead on 2nd place I wasn't really rushing by now so I just kept a steady pace going and ticked off the miles for the penultimate time.
For the last lap the rain had just stopped so a quick change to a dry tshirt and I grabbed the mp3 player and set off steady quite glad it was my last lap (did I mention I'm not the biggest fan of laps?) Nothing significant to note for the last lap really. I caught a few more runners and plodded around until about 3 km to the end. I picked the pace up slightly until reaching the good path back and got a bit carried away to the finish managing the last km in 3min 22sec. 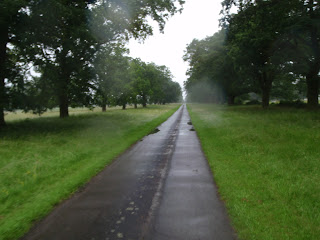 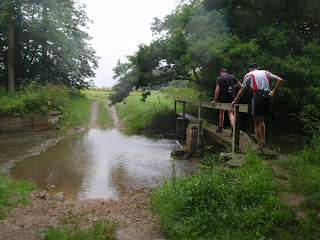 Overall the race was well organised and ideal for anyone wanting to challenge themselves with a variety of distances but with the safety of laps and no need for navigation. Although the rain made the grassy parts of the course slippery and wet feet inevitable half the course is still on tarmac and easy to run so it wasn't too bad. 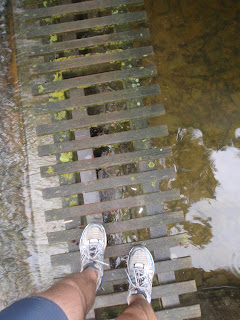 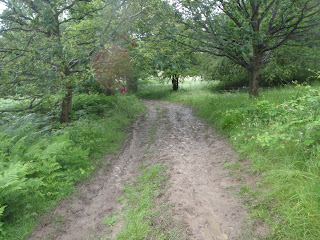 It was before 9pm when I finished and still daylight,  after that a couple of photos and I had a good feed on some hot stew and a few cups of tea and a couple more nutty 9 bars with Alan and Liz and some of the other runners passing through the checkpoint. I stayed around for just over an hour and 2nd place still hadn't arrived, until the results are published I don't know who or what time it was. Big thanks to 9bar for supporting me and also to the organisers at Fat Feet for putting on a good race and a big trophy. 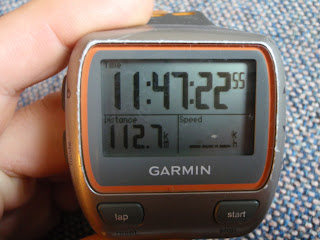 Well done to all the runners there was some very determined people out there battling on. If it was too easy it wouldn't be so rewarding!
Posted by Charlie Thatruns at 13:25