Ideal for those who want to run a road marathon with a little bit more added challenge perhaps? I think the organisation was great ( unlike my organisation on the day which was poor) and by the sounds of it people really enjoyed the day. Weather was ideal for running got a little warm for the long sleeve t shirt around mid way but the breeze was welcome on the last few miles. Must have been cold for those standing marshaling and supporting so massive thanks to them!!

I decided to enter this because it was pretty local and it sounded like 'my sort of thing' I also quite like the area and to give me a break from the mega weekend training sessions I have been doing as much as possible this year also good to get an idea on how recent training has been going without destroying myself for the coming training weeks.

So far typical weeks mileage have been between 170km and 80km and during;
Jan 400 - 600m elevation each week
Feb and March between about 2500 and 7000m each week with as often as possible trips to the Lake District and anywhere with a hill in between. Not surprisingly I am feeling pretty strong on hills...

Although I didn't recce the course beforehand I was familiar with parts of it from past runs in the area and had a general idea where the course went. Some great views to be had of exotic surrounding towns such as Bolton. The course isn't especially hilly, although that would depend entirely on what you are used to running on, compared to London marathon YES it is hilly, compared to a couple of legs of the Bob Graham Round it's fairly gentle...

The first climb from the start location towards the 'mast' is pretty gradual, I stopped to use the gents towards the top whilst 2nd place caught up, we ran across a good path with a light dusting of snow until we reached the road that leads down from the mast. This is quite a fast part, downhill on tarmac I was sat just behind the eventual 2nd place until we turned onto Georges lane (a track more than a road) to reach the first CP, quick swig of water and I decided to push on a bit and from there I ran alone, the track continues towards but below The Pike on Belmont road which is a cobbled track leading around to Rivington Road which we cross and head down towards Anglezarke on a farm track through fields which is ideal for running and pretty fast going.

After a brief spell on the road coming up to the cp around 12 ish miles there is a loop up along one side of a river/canal for a mile or 2 before turning around and heading back along the other side on good tracks and paths back to the same checkpoint which confused me a little, I took a handful of jelly babies although I only actually ate 4 or 5 and a quick gulp of water. (I never managed to figure out how those sports bottle caps worked? I just kind of chewed the lid open with my teeth, anybody else find that?)

Due to a bit of a mishap on my part (didn't bring any socks to run in just had some thin ones on that I put on in the morning) I started to feel the inside of a foot burning as the sock had worn through but decided to ignore and carry on as usual with a slightly modified gait it seems. The following part of the course is along the reservoirs before cutting over to Rivington lane towards the school before the gentle climb up the side of the school and up the road heading towards the Pike, from there it was about 4 miles to the finish, by now the foot was burning quite nicely and the thought of running on one leg didn't seem all that ideal for a couple more miles so I steadied off doing a couple of quick stretches every so often to keep things moving as they should. I briefly chatted to a few spectators on the way down towards the park who were incredibly supportive. I jogged in to the line for a very nice trophy and a cup of soup, washed down with a 9bar and banana smoothie!. Perfect!

Great to see lots of familiar faces as always and nice to be in the excitement of a race again as mostly this year has just been training runs.

Will have to go back next year now to put a decent time in, I would love to do it again such a great bunch of people behind the organisation, everything seemed to run smoothly. If you're up for a more challenging marathon or like to get a bit off road from time to time you should definitely have a look at this race in the future! 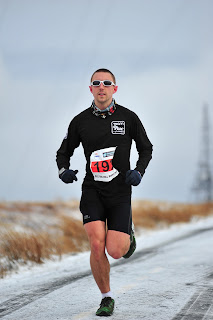 Here are this years results. I think next years winner will be nibbling on the 3 hour mark with similar conditions!