So I spun around at half way to make the journey back! The journey back being slightly easier as I didn't need to visit Yr Elen on the return leg. It's a fairly long gradual uphill back to Foel Fras and seemed to have a breeze to run against. I think doing the double would be better starting at this end as you have the easier ground and no major climbs after Pen Yr Ole Wen to the finish, although I doubt it would make huge difference timewise.

After a short time I passed the leader of the 55km who held on to the win, we chatted very briefly, I guess he was maybe 5-10 min ahead of 2nd and 3rd a similar distance behind again. I had seen the 3 together on the out and back section to Yr Elen and they must all have been only 10 mins behind me there but I made quite a lot of time from there as I ran all the way to the turn around.

There was a bit of a gap to the 4th runner and then the majority of runners were pretty close together. Before I knew it I was approaching the final peak before descending down to Ogwen again but a
couple of walkers were stood with a map looking confused and flagged me down (as if I was speeding past)
the lady asked 'Is there a path down there to the lake' Pointing down in the direction of Bangor.
'Which lake?' I asked
Lllll, lliin, lin og something... checks map lin ogwen (pointing to Llyn Ogwen which is the opposite direction).
ME; ahh well that's actually down the other way over this peak and off down there, If that's where you came from?
Couple begin debating / arguing over which way they came up
Me; I'm in a race I need to go but that lake down there is Llyn Ogwen and you're here, I said pointing at the map....

Nice and steady up and over Pen Yr Ole Wen and down to the checkpoint where I had some nice vegan cake with strawberry jam on it and grabbed a bit more water. Off for the 2nd climb of Tryfan which I had been expecting to be the toughest bit of the course. I kept grinding up and passed Borris the other person attempting the double run who was on his way back. In my head I was calculating his time to do that section and thought there was no way he had gone all the way to Nant Gwynant and back based on his pace over the first section (I later found out he missed off the Snowdon third of the course which would have added 5 hours on at best I imagine) On the scrambly part of the Tryfan ascent a rock slid beneath me and I landed on my chest which winded me pretty good (I felt breathless for the rest of the day) The summit of Tryfan was pretty quiet compared to the weekend previous that I came to recce. I got a good route down to the wall and crossed the style before the loose ascent back towards the Glyders. 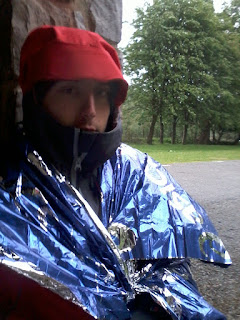 Jogged along at a steady pace once up top and made my way to each peak before a rocky descent down to Llyn Y Cwn and back up to Y Garn summit. I knew I wouldn't see any competitors now as they would be mostly back at their finish (near where I turned around) and there were one or two walkers about as I passed around and headed back up Elidr Fawr. The route up here is pretty good in this direction with it largely being runnable, gets a little steep after half way then becomes rocky on the summit. Nobody here but me and I scrambled to the summit before the long descent to Nant Peris to get to the final checkpoint and raid my drop bag before ascending Snowdon one more time.

I reached the bottom and ran quite quick along the road section to the car park with the checkpoint and..... IT WASN'T THERE! Initially I thought they must be sat in the car (about 4 or 5 cars in the car park) so I ran to the first one and knocked on the window which made the chap jump almost out of his skin (I thought he saw me coming) ... nope no checkpoint, not heard of the race.... next car just pulling away as I reached it not a checkpoint either and 2 other empty cars. I checked the phone and didn't have signal so jogged back towards the campsite just to see if they had had to move the cp and I had run past it... still no sign. I jogged a bit further until I was able to get phone signal and then had to text out to the organisors contact numbers which we were supplied with at registration.

It turns out there had been some sort of confusion and (pretty big) organisational mishap somewhere along the line... the crew meant to be here waiting for me had driven to a different location and didn't have phone signal so were off the grid and nobody could contact them. My correctly labelled drop bag for Nant Peris had made it's way to Llanwrst for some reason. This had my supplies in and spare head torch, night gear and some more layers and snacks. Unfortunately nobody was able to get my bag to me and the race was called off while I waited in my survival blanket and all my warm clothes in a shelter awaiting an evacuation.

It's an incredible shame I wasn't able to get over the last part of the course due to these mishaps. Going up Snowdon in the deteriorating weather without spare gear was a bit too risky especially without my night gear. The organizers have been incredibly apologetic and helpful although we can't go back in time to fix it I am sure the next race will be much better organised. There was only 1 other competitor who attempted the double but only managed 69km of the 96km course. I was also about 13km short. To be honest I felt crushed having run for 15 hours and over 6000m of ascent to get nothing. No goodie bag or medal or anything and technically not having completed what I set out to. The crew got somebody to pick me up and drop me off back at my car in Nant Gwynant and I settled in the YHA for a vegetarian lasagna. Luckily I had brought my own meaty foods and tucked into copious amounts of animal produce before a shower and bed.

Next morning I was wide awake by 5am had a good breakfast and headed over to Betwsy Coed where I had a jog around one of the forests en route and met in the town for the post race brunch with marshals and a few competitors.


I think the course is great and the marshals I did see were incredibly supportive and next time should be perfect with a couple of extra volunteers and perhaps a better communication system in place where phone signal is unavailable. If it fits my schedule I would definitely do it again, having to be vegan for the race day isn't really a big deal I tend to eat 9bars along with dried fruit and nuts if I do eat (the savoury and peanut 9bars are vegan the other varieties have honey)

Thanks to all involved for a great weekend. I appreciate a lot goes into an event like this and I reckon the next one will be great! 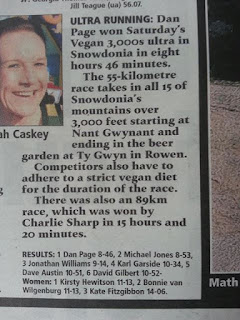 Posted by Charlie Thatruns at 19:37