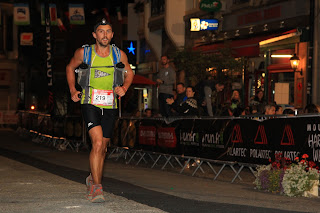 Ultra Trail Du Mont Blanc 2015. Thousands of runners descend to Chamonix in France each year for the UTMB and various other events under the same organisation. I was lucky enough to be selected first time in the 'lottery' for a place, seeing as the race gets even more entrants than places available. To be honest I'd not expected to make it in this year but apparently your chance of being selected increases for each year. Having done the Dragon's Back and AAUT very close together I had planned on a fairly steady August to ensure I was rested up and ready for a good run at the end of the month. I chopped down to about 50-70 mile a week and made use of some 30-35 mile races in the Peak District for some long steady runs. 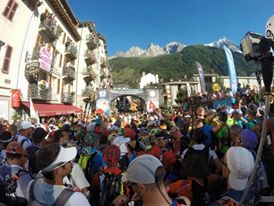 You definitely need to sort out everything well in advance like accommodation and transfers as the town in rammed with people through the week. I managed to find a room in a chalet not far from town which was great, Flew in on Wednesday and arrived in time to get registration out of the way. If you're not keen on big crowds or ques of people then it's worth getting in late or early to the registration. Registration was fairly straight forwards, just there's a lot of people to get through I think I heard 6000 runners over the 5 events? About 2200 in the 170km. On the Thursday I had the day to explore a little bit. I had a stroll up the zig zags to Plan Praz which is about a vertical km. The weather was amazing so views were great! Other than that I ate some Crepes and had a look around and bumped into a surprising amount of Brits and runners I've met whilst racing around and about in Europe. 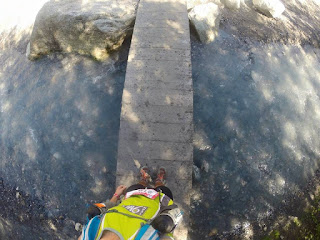 Friday - Race day... The start is 6pm so it's just a waiting game really. I got settled in a good cafe for some food around lunch then went to chill out in a park just far enough away from all the hustle. Once bag drop opened I got that sorted and headed to the start still about 90 mins to go.... It was a mission in itself getting to the start and I couldn't even get close to the front pen. After over an hour of being packed into the town square the countdown to the start began and we proceeded to walk out of town (literally rammed with people so unable to get running to start with).

After running Magredi Mountain Trail 100 mile last year I'd run just over 22 hours for the 105 miles with 7800m ascent. So with the UTMB Basically adding an extra 2000m ascent I was expecting something like 25-26 hours possibly a bit quicker if there were no major issues. For the first 5 miles it's flat here so I tried to settle into around 7 min mile pace which was difficult in the crowds so I just did what I could along to Les Houches where we had our first climb to around 1800m. Apart from a lot of walking poles flailing around all good so far (no I didn't use poles). It was great to see some friendly faces out on the route. Lot's of enthusiastic supporters out lining large portions of the route too! I found it a bit loud and busy and was looking forwards to getting out into the mountains and enjoying the trail. The descent into St Gervais was good fun! Pretty sustained but the dry conditions made it straight forwards. The grassy sections would be a bit hellish after rain I reckon! 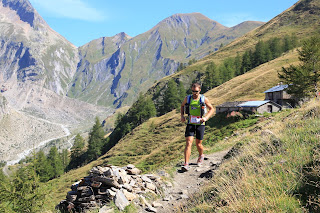 From 21km to about 45km is pretty much up hill. Going from about 800m to 2400m. The scenery was fantastic and seeing the sun disappear and the sky start to light up with stars and the moon was pretty special! It was literally bright enough to move without a head torch at times. It was a great sight to see hundreds of head torch lights snaking up the valley after Les Contamines where the gradient stepped up a notch! I was moving well and passed the first quarter in just under 6 hours which I thought was about right compared to what I was expecting but started to feel a bit breathless as I plodded up over the mountain pass before dropping into Les Chappieux. The pace had felt relatively comfortable up to now but I was literally crawling before the high point. On the descent I had to lay down and try to stretch out my chest and take some deep breaths. I tried to adjust my race pack in case that was affecting me but didn't seem to feel much different. The breathlessness subsided and I moved on carefully and focused on just moving efficiently forwards and kept on top of my nutrition and hydration as I made my way up the next climb lasting around 10km and taking us back up to 2500m where again progress slowed. Obviously you're going to be working harder uphill but I was having to actually stop to rest whilst walking uphill even at this relatively early stage in the race. 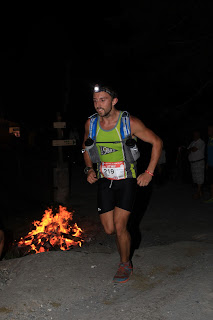 There was a fairly rocky bouldery section which I'd not expected (a veteran of 2 previous finishes told me it was added in but I was non the wiser) I love that kind of terrain and although struggling I was happy and loving the extra climb and rocky descent we were treated to. I took my jacket from my bag just in case I would need to wear it as I again had to take a minute on the uphill. The was another chance to look at the huge trail of head torches making their way around the route both in front and behind which was quite cool, the moon was bright and I was now in Italy. What more could one want on a Friday evening? 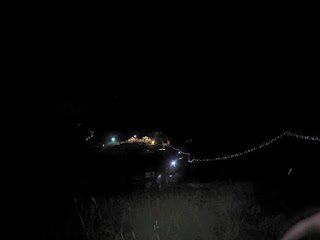 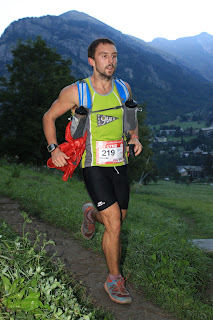 There are a few smaller climbs before a 10km section descending down into Courmayeur which is where the drop bags go (not quite half way). I had reached here in 13 hours and my legs felt good, I took a small stone out of my shoe and checked my feet which were fine and not causing any bother. I had some snacks and topped up my drinks, whilst having a quick chat to Mr Lendon who left before me, I took out some more food from my drop bag and got going again. In terms of time I was pretty much on what I expected despite the struggles I was having. I knew if my breathing was to remain as it was my average pace would drop over the second half.

It had just gone light before I had reached the cp and the sun was starting warm up. I was chatting to another Brit as we climbed up to the next checkpoint at Refuge Bertone just shy of 2000m. From there, there is a bit of a plateau before another decent climb to Grand Col Ferret, which pretty much took me into the mid afternoon sun and also into Switzerland. Temperatures were hitting a lot of people and making it quite tough going although I was happy enough in the sunshine and just used any streams for a quick dip on route. Some great scenery and fantastic views before a lonnng descent lasting about 10 miles down to a small town.

Now on the profile it looks relatively easy to the finish... 50km with 4 'hills' left increasing in size each time with the final 10 or 12 km all downhill...... I think mentally breaking down the route checkpoint by checkpoint is a good way to go but a quick calculation I couldn't help but make was suggesting a 3am finish to me! For some reason I never thought about quitting I just thought about how I could keep going. The climb up to Champex-lac was really hard how I was feeling (although it's actually one of the easier climbs of the route) really minuscule compared to the rest! I moved from there ok and I think the following checkpoint Triente was where I got my head torches back out. I felt really good as darkness fell once again. Everything felt great other than my chest and I was able to pass a lot of people on the descents. There are some good steep climbs towards the back end of the race and the final climb was awesome! I turned my torch off and used the moon light to ascend up to the rocky path that snaked along the tops towards the final checkpoint at La Flegere. From here just a matter of 8km downhill to deal with. By now it was into the early hours of Sunday morning and I was focused on keeping a steady pace and staying on my feet. It wasn't long before I was dropping into the top of Chamonix and starting to hit the road around town and into the finish. 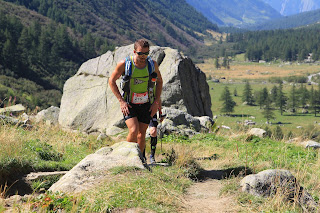 There were still people lining the streets even at 3am as I crossed the line in 32 hours and some minutes! I want to say a massive thanks to everyone who was sending messages of support and watching out on the tracker and the live webcams! (The race website has a basic checkpoint tracking system but I also used Race Drone tracker too for live gps coverage) thanks to Lawrence (who'd run really well in the TDS earlier in the week) for helping me get my stuff sorted afterwards too! 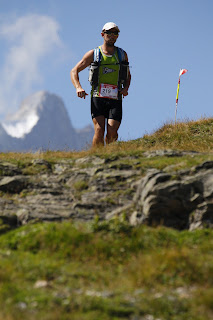 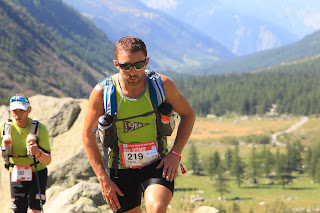 Other than my breathing/ chest issues everything seemed to go really well. I've experienced similar feelings of breathlessness looking back a couple of times when I've been over 2000m... Although I don't know that altitude could have affected me so much so quickly it's something I need to look into. Other than that there could have been something postural from carrying a heavier race pack than normal although again on its own seems unlikely to have caused that much trouble. Since the race I've been back out running and climbing most days and haven't had any issues to note.

The route is fantastic. It's great that so many people are out to support the event and the runners but it just felt crowded to me, I like to run in the mountains for the feeling of exposure and quietness which was difficult to get in such a busy event. I'm not really planning to go back for another bash at the moment, there are that many events out there I love the chance to explore a different part of the world with each race!  Some photos I took myself on the Gopro, others are from the official race photographers. Ohhhh and one last warning THERE IS NO MEDAL!!! For a race that costs more than most I thought that was a bit disappointing but we did get a body warmer type fleece.

Well done to everyone who finished and took part! I couldn't begin to name everyone I met and caught up with, there really were heaps of runners there! It was fantastic to see you all! Enjoy the trails!

Posted by Charlie Thatruns at 15:42