I'd been looking for a hilly marathon to run a couple of weeks before the Rodopi 100 mile in Greece and was recommended to this race by some German friends. Before entering the race I'd never been to Germany and after having a look at the website, concluded that this was actually a fairly tough marathon. Over 1500m of ascent (1800m on Strava) puts it somewhere similar in terms of ascent to that of the Excalibur trail marathon and just a little less than Scafell Pike trail marathon. I think on the entry form I put that I expected 3.30 to 3.40 for a finish  time. 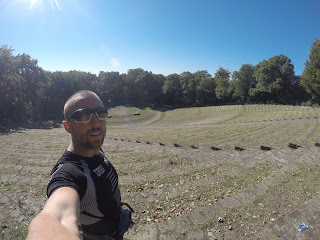 I was able to get out a few days earlier and explore some of the route in 2 chunks. It was useful as it gave me an idea of the terrain and the gradients although the course on the day was to be fully marked with sawdust and tape. 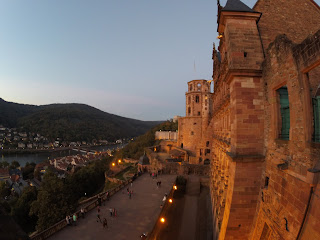 The route starts up in the castle overlooking Heidelberg, there is a quick descent on the cobbles through the altstadt (old town) and over the river Neckar before a climb up around 6km to 400m. From the start I'd been on the front line... Two guys in matching racing kit bolted and led closely followed by a couple of others and myself. I did the first mile in about 6 minutes and there was already a gap between me and those leading. We began to climb up towards Thingstatte which is like an amphitheater type structure, with plenty of steps... The route then weaves through the forest and descends on some slippery single track down into the first checkpoint. 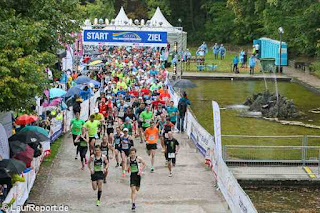 I picked off a runner here and then followed the undulating trail over the next few kms as we climbed back up to about 560m I was passed by two runners and soon after arrived at the second cp just over 10 miles in a wee bit over 90 mins. I guessed I was somewhere in the top 10 maybe 8th... but not sure and just stuck with my pace. There were heaps of runners cheering at each cp so far it was really lively. 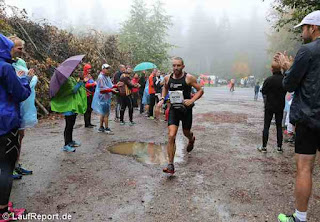 Next after running on the top in the forest for a couple of km it is essentially downhill from 20 to 30km where you cross back over the river. There were a few undulations but I knocked the 10k section out in 40 mins and was now had 12km to go and 2hr 20 on the clock... only one more thing.... There is a rather meaty climb still to go including the 'Stairway to Heaven'. So over the next 6km I climbed and climbed to reach the Konigstuhl around 550m again in 3 hour 3 min... I had passed 2 runners at the bottom of the climb one was in the marathon but the other I realised was in a relay team!! I had completely forgotten about the relay runners. I wasn't sure but thought I must be somewhere in the top 10 still. 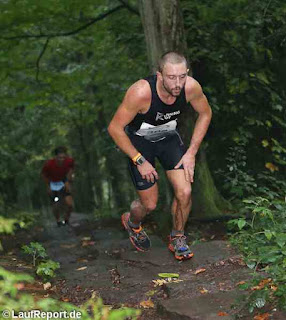 As I ascended the stairs a relay guy passed me too so it was a bit confusing position wise I just set to descending strong to the castle and the finish. It's pretty rocky and the slippery paths full of roots but I had used the same descent in one of my recce runs and was comfortable to let the legs go. I had held back a little during the earlier stages of the race knowing the last climb was pretty big although it passed much quicker than I expected. It wasn't long before I could hear the spectators cheering and the loudspeaker with the commentator and I was entering the castle grounds. I picked the pace up and ran into the finish to find out I came 3rd. Within 1 minute of the 2nd place who unfortunately was being promptly strapped onto a stretcher when I finished.

I'd finished in 3 hr 25 mins which was a bit quicker than I'd expected but had felt like a good run. The castle was the venue for the post race meal and presentation and I was up on stage to take a nice wooden trophy and complete a few interviews with the German press. 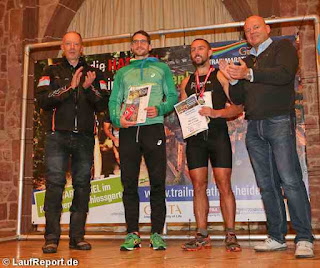 The town itself is really nice and has enough to keep you occupied if you wanted to make a long weekend out of the race! One I'd definitely recommend! I managed a trip around the castle too whilst I was there. Interesting stuff!
Posted by Charlie Thatruns at 21:03