2013 Bullock Smithy. 56 miles of Peak District fun. some nice weather too. I've done the run twice before and each time have ended up tagging on with someone and running with them from around the half way point. This year I decided to run it at my own pace and had selected it as a good long run before Poland and the Beskidy Ultra Trail 220km.

The race has 14 checkpoints each with various food and drink although I didn't make much use of any of the edible goodies. There is a cooked breakfast upon finishing (which due to the 12noon start time was at about 10pm for me) very nice though!

Basically you choose your own route between the 14 points provided it's a footpath or road you can use it. From the start in an open park near Hazel Grove there is about 3 or 4 different exits people use so it's a little chaotic if you aren't expecting it. I chose to set off out along the main road and settled behind a group of 5 runners, one of which was the eventual winner and also course record holder who hung on to a lead of just under 10 minutes on me by the finish - Well done!

We spent a couple of hours running together and within sight of each other. He seemed to know the route very very well and the couple of times I passed him he could pop up in front of me again. It would be well worth recceing this route if you're wanting to race on it although it's not such a serious 'race' as a challenge. There is a 24 hour time limit allowing hikers to complete too! 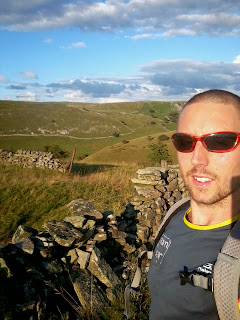 With route choice I had done it twice before and each time on a different route so this time I decided on a route which took the best of both and was quite happy with it although it seems there are still a couple of spots I could improve for next time. Here is the selection of trophies available for various categories. 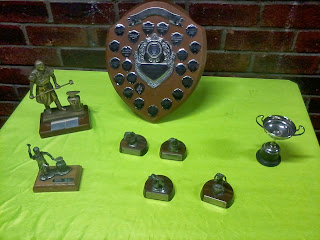 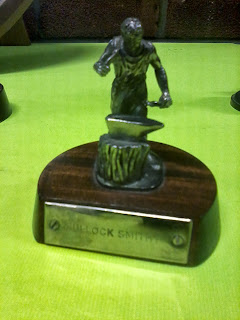 They have a starting gun resembling an anvil and a hammer! 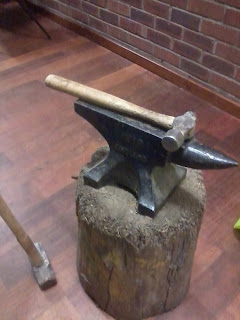 The eventual finish line. 9 hours 20 something mins for 56 miles. About 2500m ascent off my head. No major hills depending on what you're used to... I was happy to test out kit and have a final dress rehearsal before Poland, although I actually got to do High Peak 40 mile too! 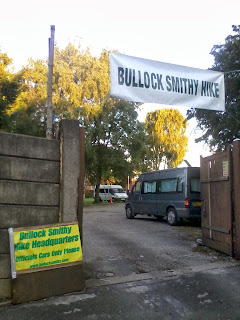 I'm not going to drag on about the route but there are some nice spots and some highlights include Jacobs Ladder down into Edale, up and over Hollins Cross, Cave Dale, Millers Dale, Earl Sterndale and up and over near Mac Forest finishing with a couple of kms flat and fast along a converted rail line and a country lane back to the finish at Hazel Grove near Stockport.

If you're looking for a friendly run with plenty of support and food, that is great value, yet has a little variety with plenty of opportunity for navigation practice, get in next year! First full weekend of September!

Posted by Charlie Thatruns at 20:18