The Spine 268 mile run along the Pennine Way from Edale to Kirk Yetholm, a 168 hour time limit... 5 checkpoints, about 12000m ascent, lots of friendly support crew. Generally the PW is marked with a few signs and terrain is a mix of stone, bog, mud and field tracks. Generally feet were wet the whole time.
Thanks to David and Laura at www.sportsunday.co.uk for the professional photos and my little camera phone for the others! MASSIVE thanks to 9bar and RunGeek for helping me out with kit and also thanks to everyone who sent a message of support during the race. Thanks so much, you helped to get me to the end! I'm overwhelmed by the amount of support and really happy that I inspired a few people to get out and go for a run! 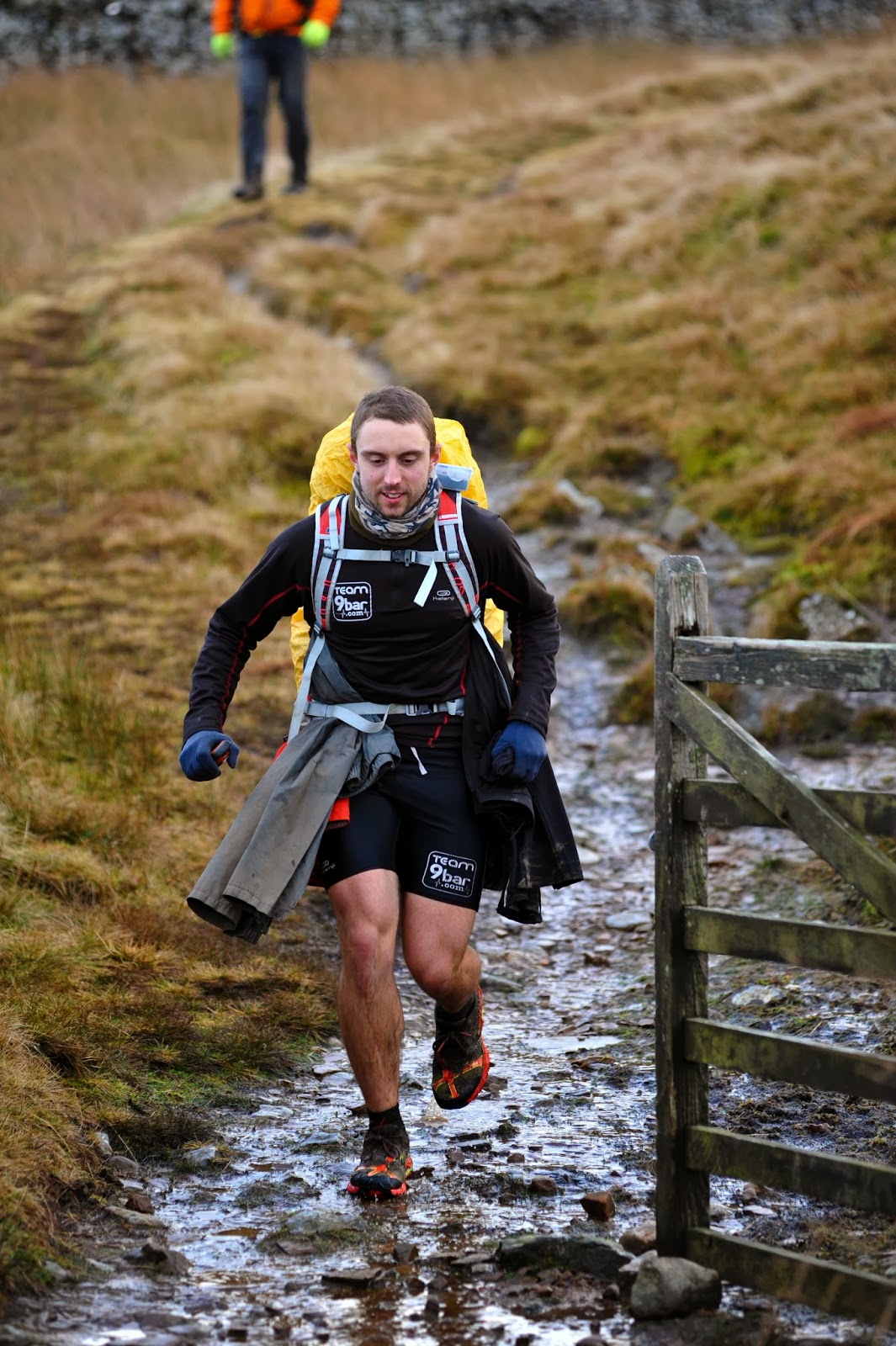 Some of the ground got a little muddy this was a particular section around 200 miles in... had to laugh really, it was difficult to move through, glad the shoes were well fastened! 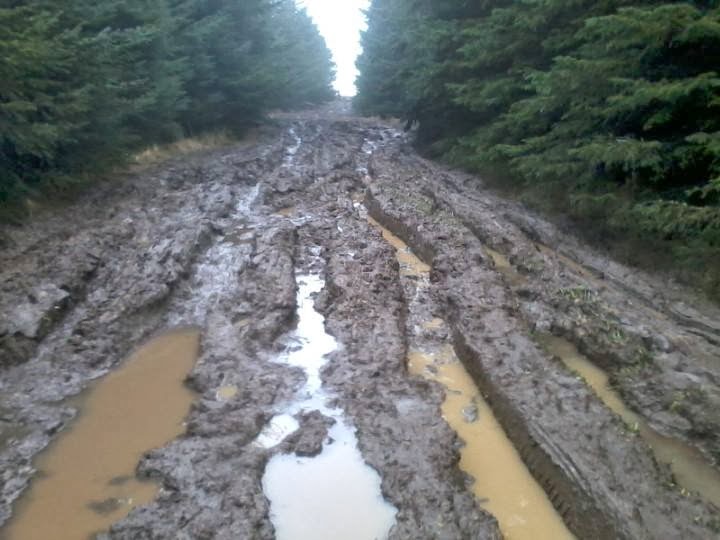 The safety was taken very seriously by the organisers and it was incredibly well organised. Each runner had a gps tracker on them so they could be tracked live online which made great entertainment for spectators and supporters. Also good to keep an eye on weary competitors. My actual pack weight that I ran with was 9kg + water and snacks so about 11kg total. Some competitors looked to be carrying less some perhaps a little more but my main concern was to be comfortable and get to the end of a challenging adventure. 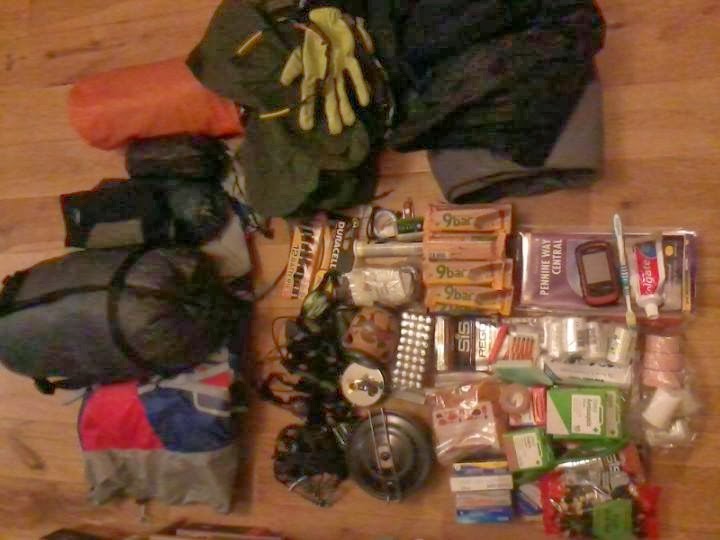 We left Edale at 8.22am on Saturday 11th of Jan and set off with 80 runners in the Spine race and I think about 45 in the Challenger (100 mile option) 30 of the Spine runners would make it to the finish line towards the end of the week. The first few hours passed quite uneventfully, some snow as we crossed Kinder and Snakes Pass looked to be a little tricky for  cars. Continuing on over towards the Torside reservoir and crossing the A628. I'd settled down into what felt a very easy pace and ended up running with a chap called Steve who was having a bit of a change from 24 hour track races. We shared a few hours running on to the 40 mile checkpoint where we had a hot stew meal and some snacks before heading off into the night on the 60 mile section to Hawes. We were joined by Warwick for a few hours and we plodded on through the night. Eventually I dropped back as I was feeling very tired (strange considering I'm usually fine for at least missing one night sleep, in hindsight I didn't sleep all that much the week leading up to the event) It was a bit of a blur the first night and hallucinations started from the early hours and continued through much of the day, I had a real tough time reaching Malham where I stopped in a cafe with a small group of Spiners. Just after dark I headed up to the remote cp next to Malham Tarn. I got my shoes off and had my feet seen to and they were a mess... The seam on the Sealskinz socks had cut into the tops of all my toes. I hadn't had this problem in any training runs (20-40 milers) although they aren't the slightest bit waterproof despite them being sold as that, I found they were warm, doesn't matter how warm they are if they shred your feet up though. So basically I scrapped the sealskinz and reverted back to my usual cheap sport socks that I've never had trouble with, all good but the damage was already done.

I was held in Malham for a few hours by the medics until I rested and there was some quite heavy rain so I was glad to be in the tent, I didn't manage more than a quick nap due to the runners coming in and out of the cp but rested in my sleeping bag and drank lots of tea and ate lots of food before wrapping the feet up and gearing up for a nice run into Hawes. Was quite warm and actually nice weather up over Pen Y Gent and I enjoyed it although my feet were beginning to hurt quite a lot, wasn't too happy with this as it's only Monday and I still had over 150 miles to go! 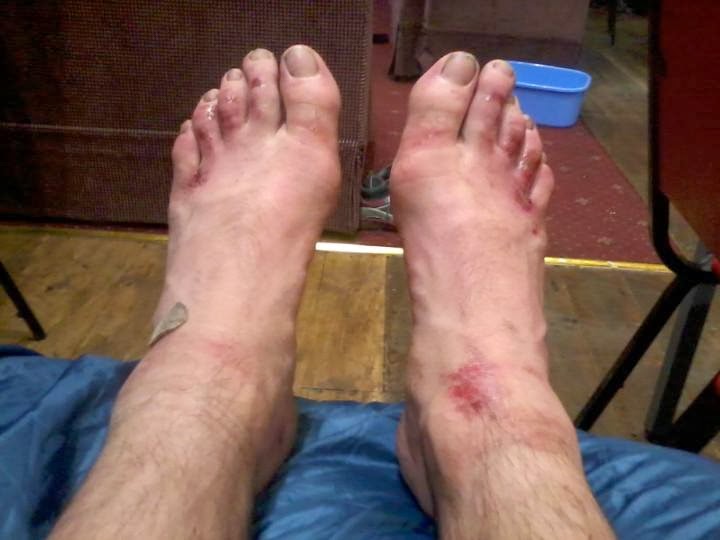 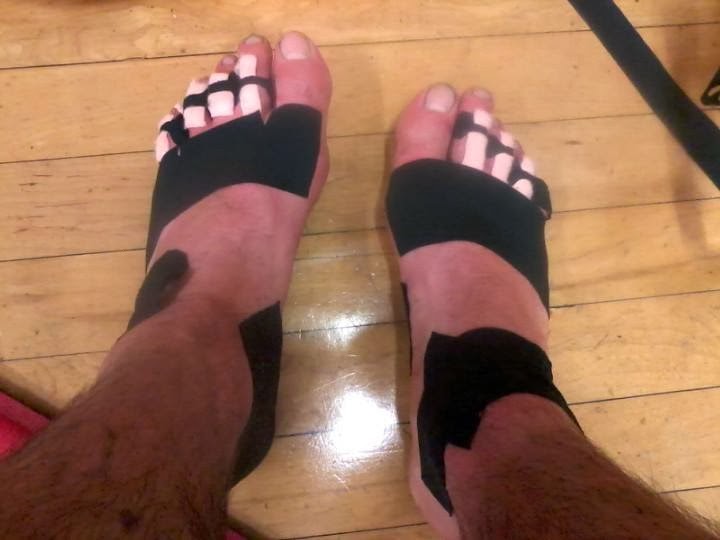 It was great to catch David and Laura taking a few snaps on the route, they can often be found lurking in the bushes at endurance events around the country! I got to Hawes... 100 mile point and had the feet sorted, got plenty of food down me and went to ly down for an hour, after about 30 mins I gave up due to the noise of other runners rustling about and just not feeling tired at the time... Geared up and headed out into the darkness once more to enjoy a snowy trip up and over to Thwaite. I had recced the section from Pen Y Gent over to Dufton so I knew the next 80 odd miles quite easily. I passed a few runners after leaving the cp and made good progress over the hills although by now the tape on my feet had disintegrated in the wet. 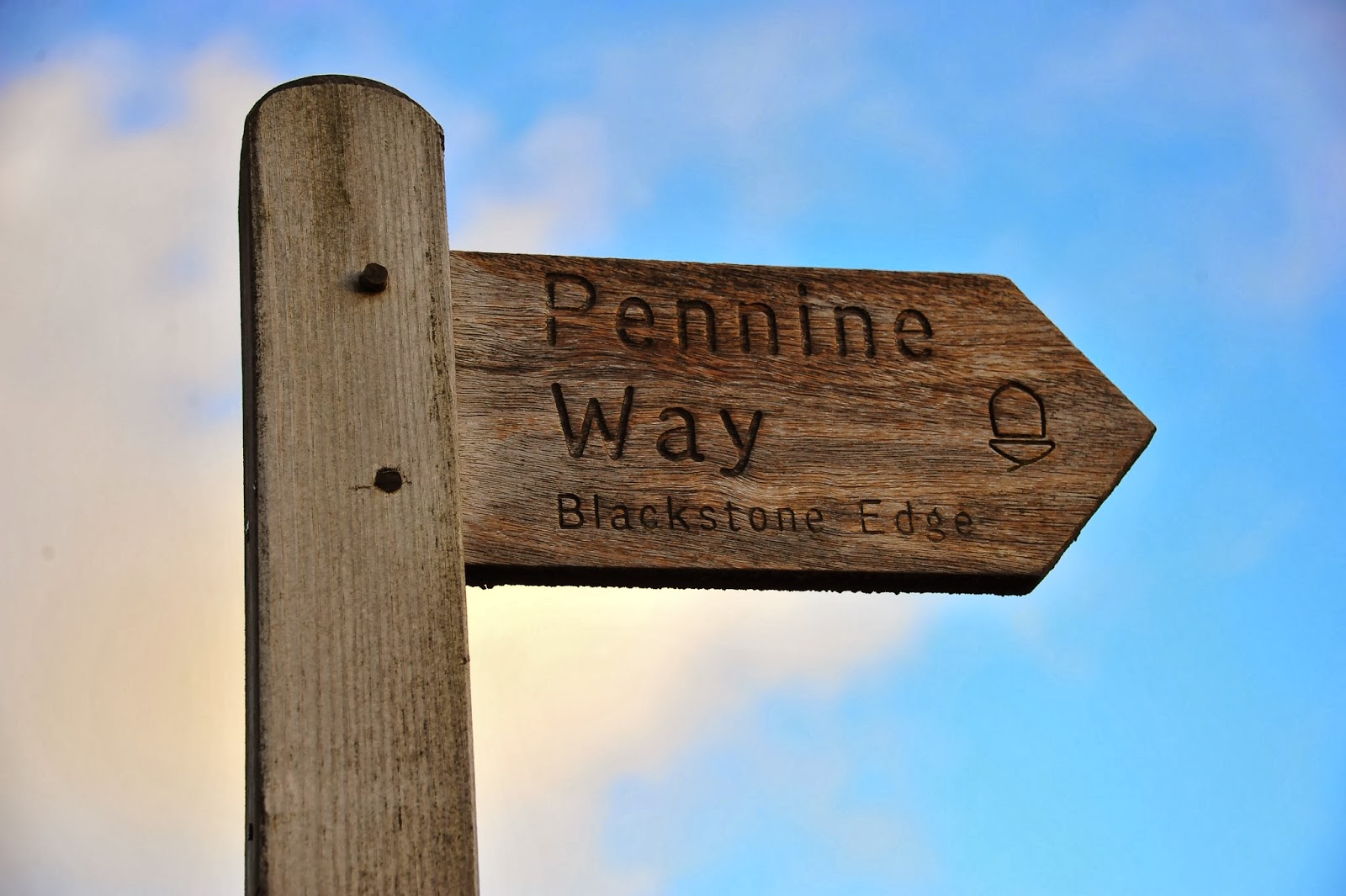 Below... Looking tremendous after only half a day of running! Looks like I've been out for days haha! 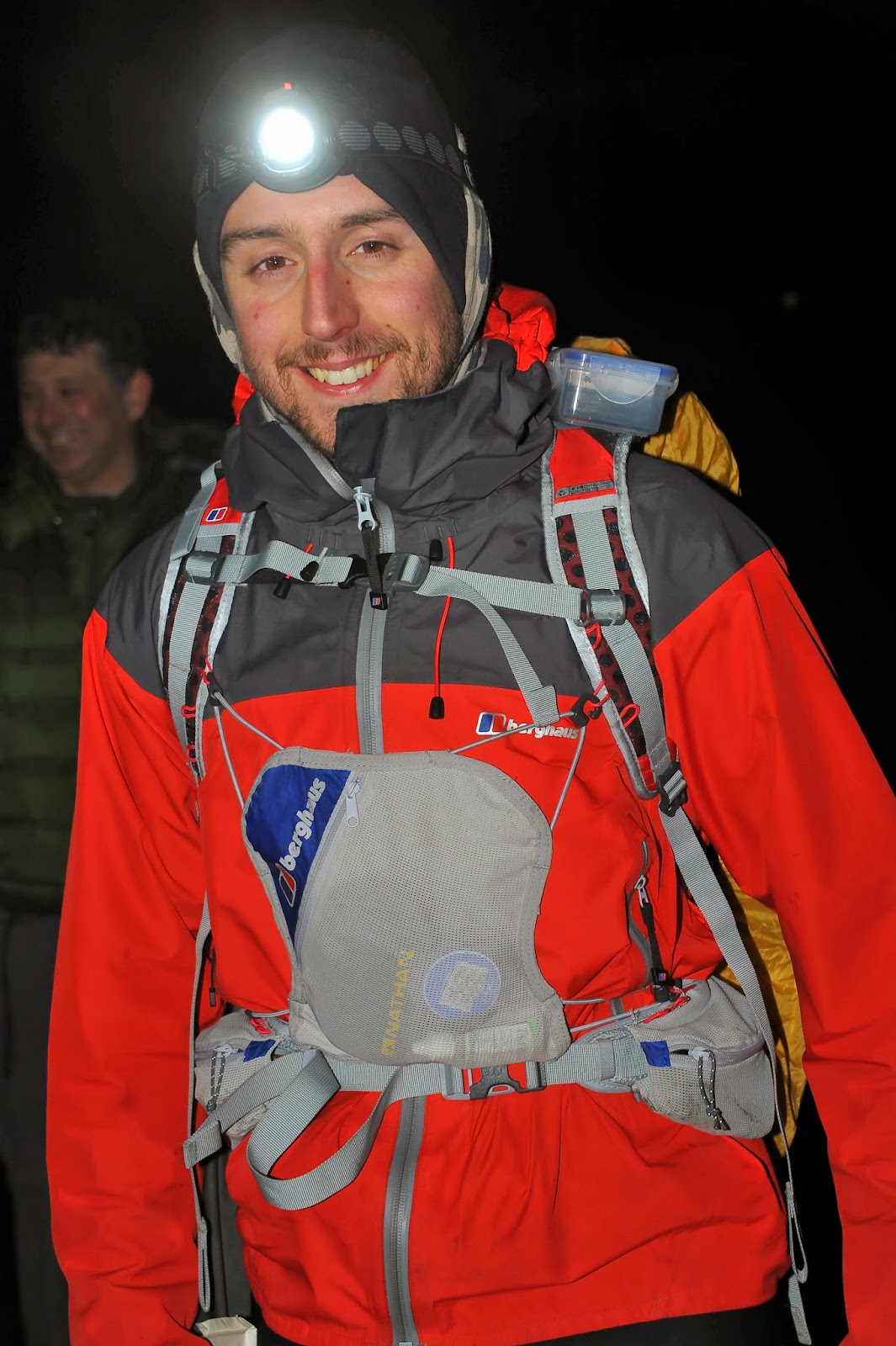 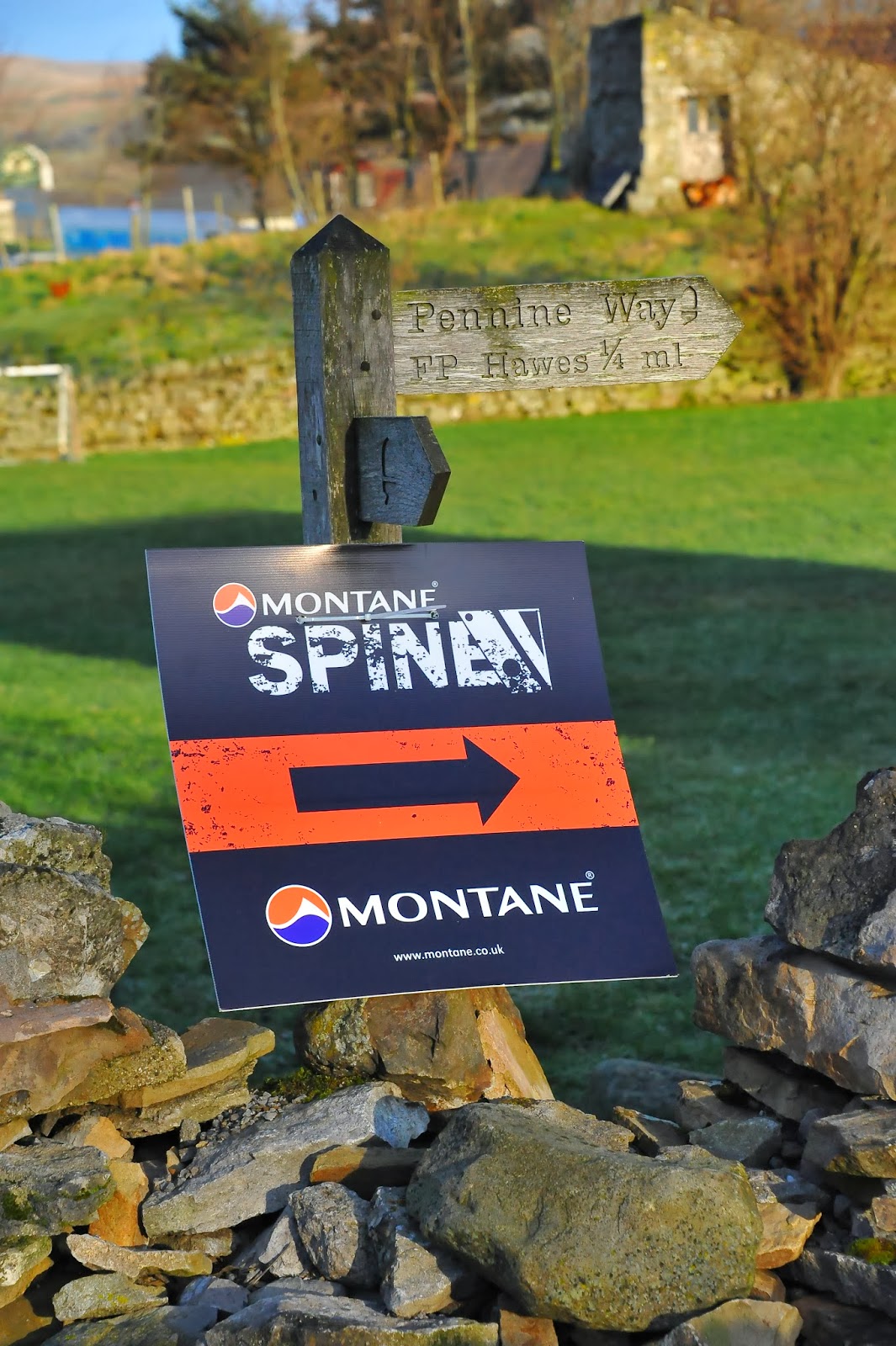 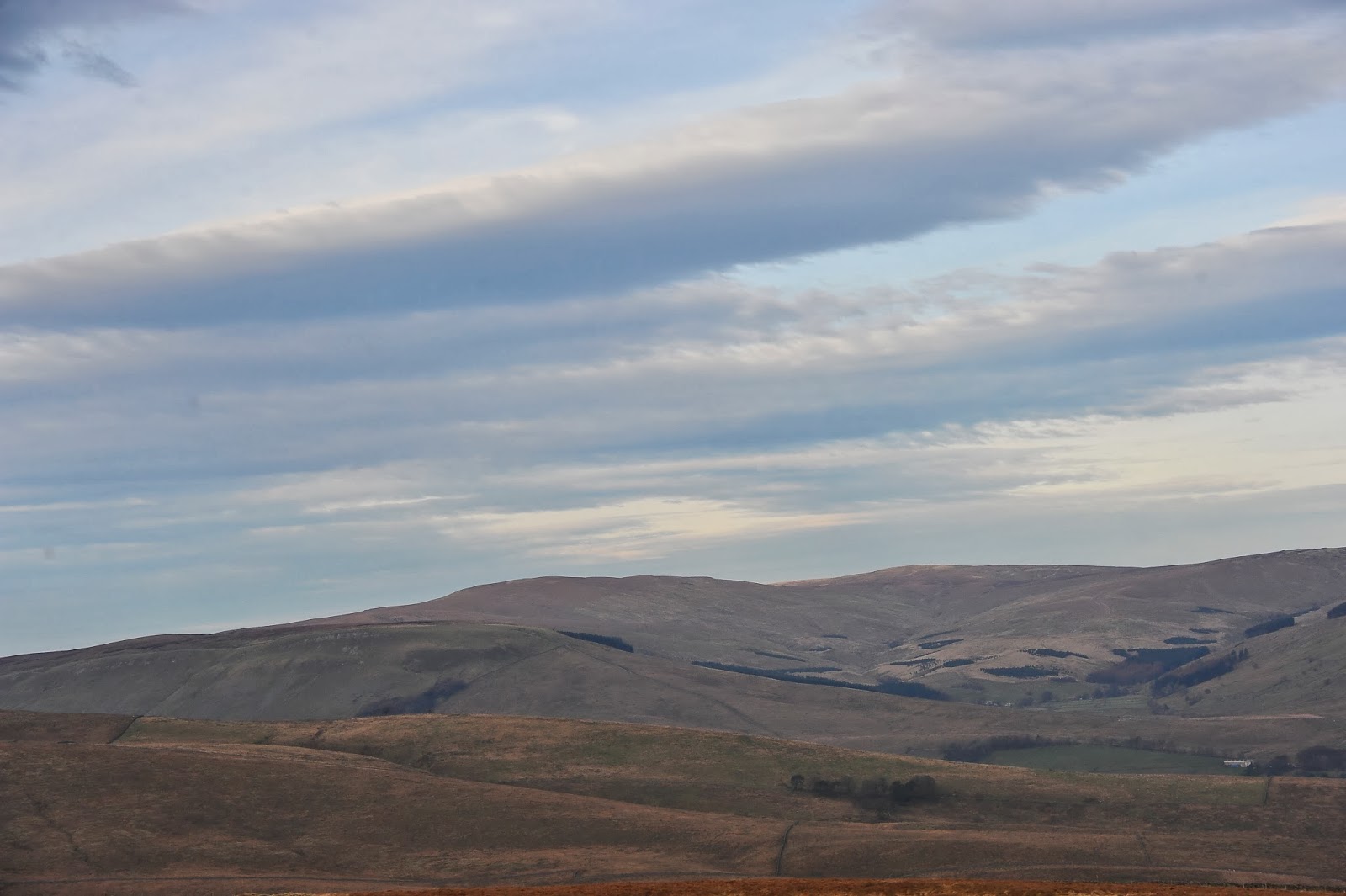 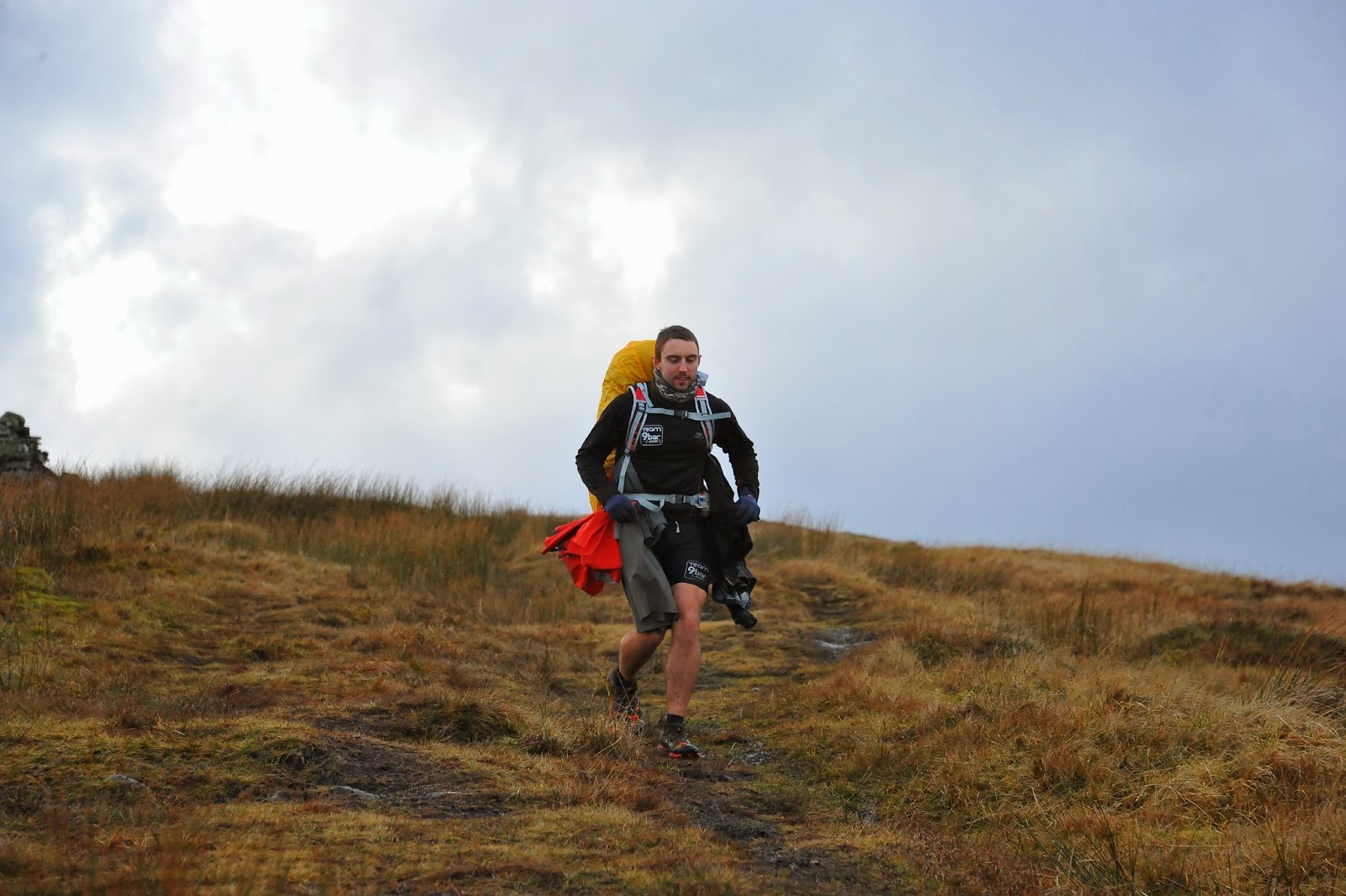 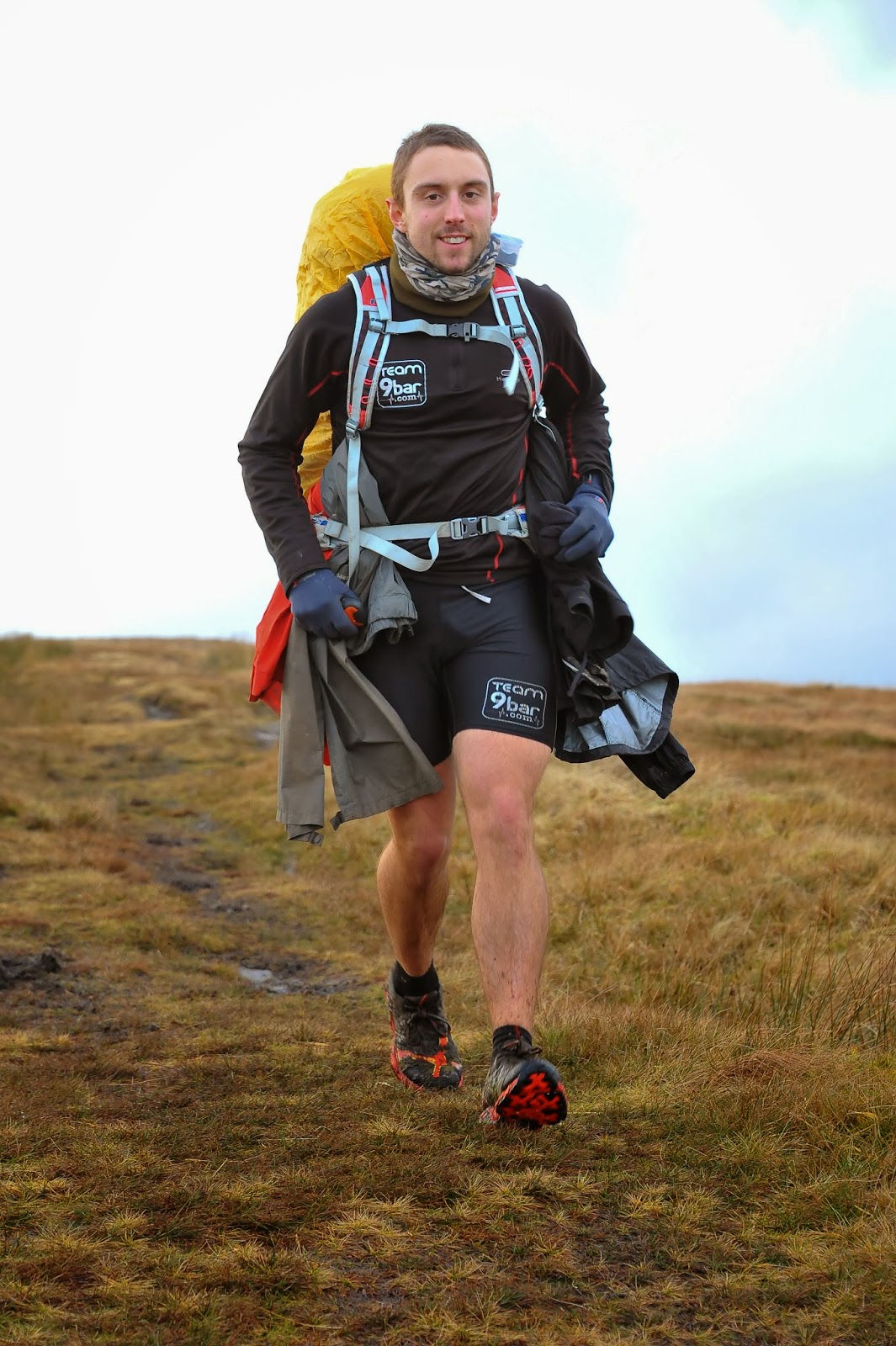 Descending down to Hawes.

After quite a long slog of a day after Hawes I bumped into Colin who kept me going and we trudged along on what was a hard day for me, all the way over Tan Hill Inn which was followed by a cold boggy mess with the most vague path I've seen in a while and down into Middleton CP for mid afternoon. Here my feet were pretty much destroyed, very painful and thinking that I wasn't quite half way didn't help... The medics had a serious look at my feet and I sat and drank tea and ate lots of food before setting off out into the night. I knew this section and it was quite easy going on the whole compared to other sections, there was a group formed and about 8 of us running together until we drifted apart during the snow heading over High Cup and down into Dufton.

On reaching Dufton runners had to wait until 7am before moving on as the weather was rough on the high parts of the course we were heading onto. We crashed in a stone bus shelter for about 20 minutes until 7am then set off on the long ascent up and over the higher points of the course, Cross Fell and Great Dun Fell. It was a little breezy here (think wind blowing you sideways) and there was ice on the stone slabs that made the path over the moor. We reached the mini support point in a bothy up in the hills having a hot drink and some snacks before a long miserable descent which took forever for me. Feet were excruciating. It was dark again and slogging up to the next cp I had had enough really. I sat down and got some food down before having a quick hours nap in a quiet room. More food and a very slow attempt at getting ready as I didn't really want to do any more. Knowing I had 85 miles still to go and could barely stand up wasn't fun. I set off out of the cp and spent 30 mins fumbling around in fields trying to get out and back onto the PW. I actually got a bit of momentum going and made decent progress on to Hadrians wall where I caught a  group which spread out as the day went on. It was nice to spend time with other runners to break up the boredom, especially when the other runner starts shouting at trees and the mud! Laughing at that was the closest I came to cramping! It was a slow grinding end to the section and getting to Bellingham was a relief although I again had no desire to keep going, my feet were more painful that I could have ever imagined.


Plenty of food here as it was only 40 miles to the end and I was determined to get back in daylight on the last day. I planned to have an hour sleep and leave the cp at 10pm. I woke up but took ages getting ready and left after midnight. I was moving ok after a very slow painful 30 mins to do the first mile out of the cp, it was a nice temperature and the track across the hill tops became reasonable it was a bit strange wandering around in the mist but I came across the friendly face of Andy Hayes and his wolfy looking friend. Nice to chat briefly although I was probably just jabbering nonsense at him.

Next dropping into Kielder Forest I was so tired I kept falling over and just stopping, yet I was having incredible DeJaVu on the course. For at least 8 miles it was as if I'd been on the course before. I then thought I was hallucinating as I saw a big van with Inov8 on the side of it in the track, sure enough it was real and I was greeted with warm custard! That was amazing thanks so much! Then I proceeded to much through that and copious amounts of snacks before sheltering in Flips car with the heater on and getting an hours sleep.

After that... It was time for the last 28 miles back to the finish which I managed in 6 hours 30 mins . I pushed hard over all the terrain and barely stopped other than to change layers and grab some snacks out of the bag. It was painful but I just had had enough and needed to get it over with. I was getting bombarded with messages of support from people watching the tracker and seeing the pace I was moving at I checked a few of the messages and got great energy from them which helped me power on to the finish.

The support from everyone was unbelievable, the crew, competitors and supporters, everyone was in it together and all kept each other going really. I'm glad it's over, I didn't enjoy having to run because of the pain in my feet from the cuts, I didn't really make much effort to speed through cps, had I used normal socks I'd have been in little pain and would have moved quicker as a result probably been much more tired and have fatigued muscles. My legs muscles/ joints have felt pretty much fine since and my feet now have stopped stinging.

If you're after a hard and very long slog then the Spine is for you it broke a lot of very very strong and impressive runners. If you fancy something a bit more leisurely, still tough but a substantially easier distance (or perhaps just want to take your gran with you)  you'd be better with the challenger. Seriously I'd suggest to people to try the challenger first unless they are well experienced and train appropriately.  I imagine it would be a totally different experience in snowy conditions though gambling on British weather correctly is probably harder than doing the race!


If you want to get your entry in for next year jump on here when they open http://thespinerace.com/

Posted by Charlie Thatruns at 21:42