Well I'd never been to the Isle of Man and any race with the words Mountain and Ultra in the title have got to be worth a look right?!!

It's a short flight away from Liverpool airport, literally before you finish going up the plane starts coming back down again! One of the organisers had arranged for a quick tour of the Island on the Friday after arriving. We drove about and pointed out which hills were which and had a little stroll up Snafell, about 10km into the race then drove down towards the finish where I would be staying for the weekend at Cherry Orchard (a hotel with some self catering apartments too) in Port Erin. Port Erin is a nice little town with nearby headlands overlooking the sea. Had a little 10k run around on the Friday afternoon in some stunning weather. 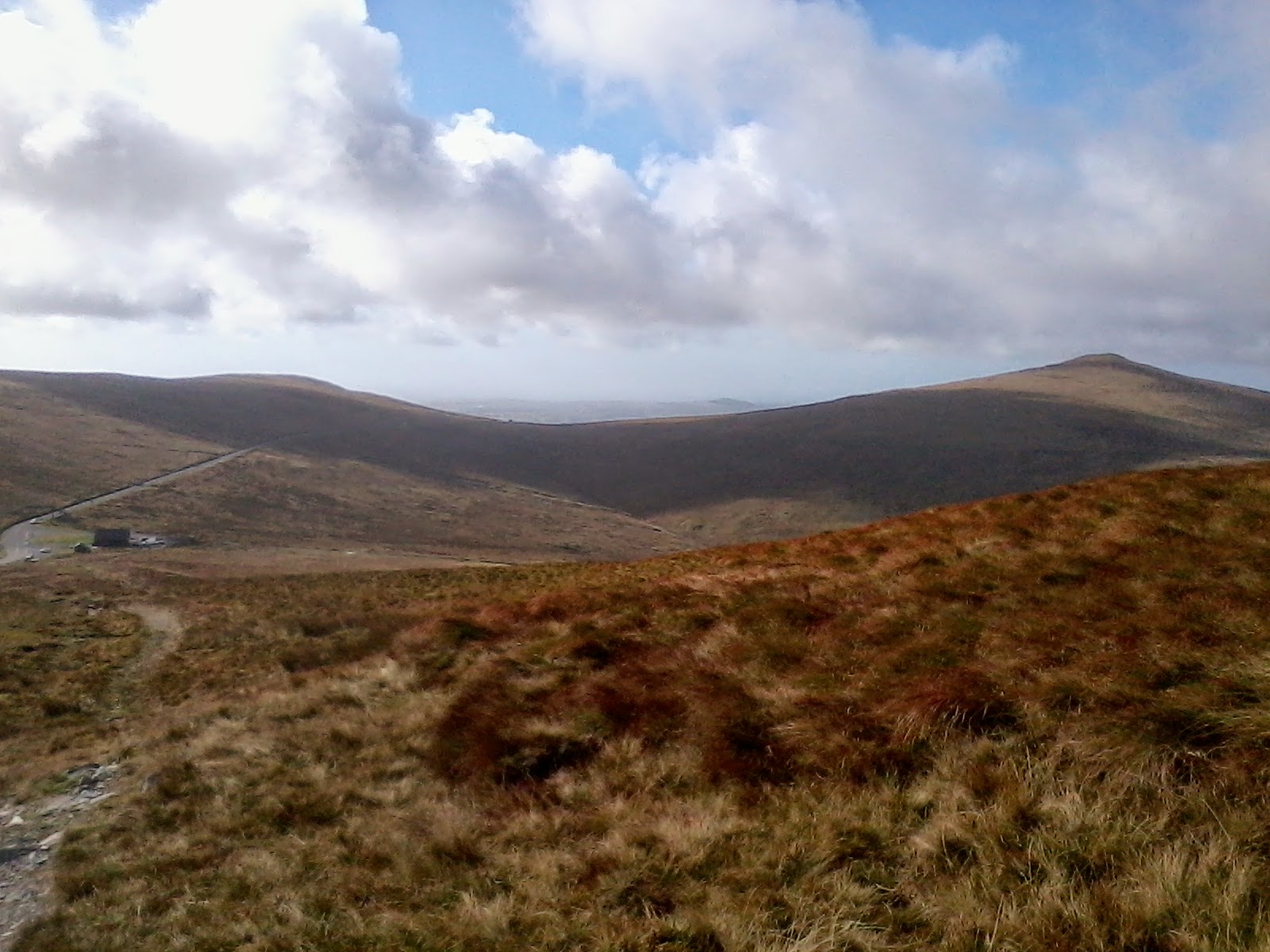 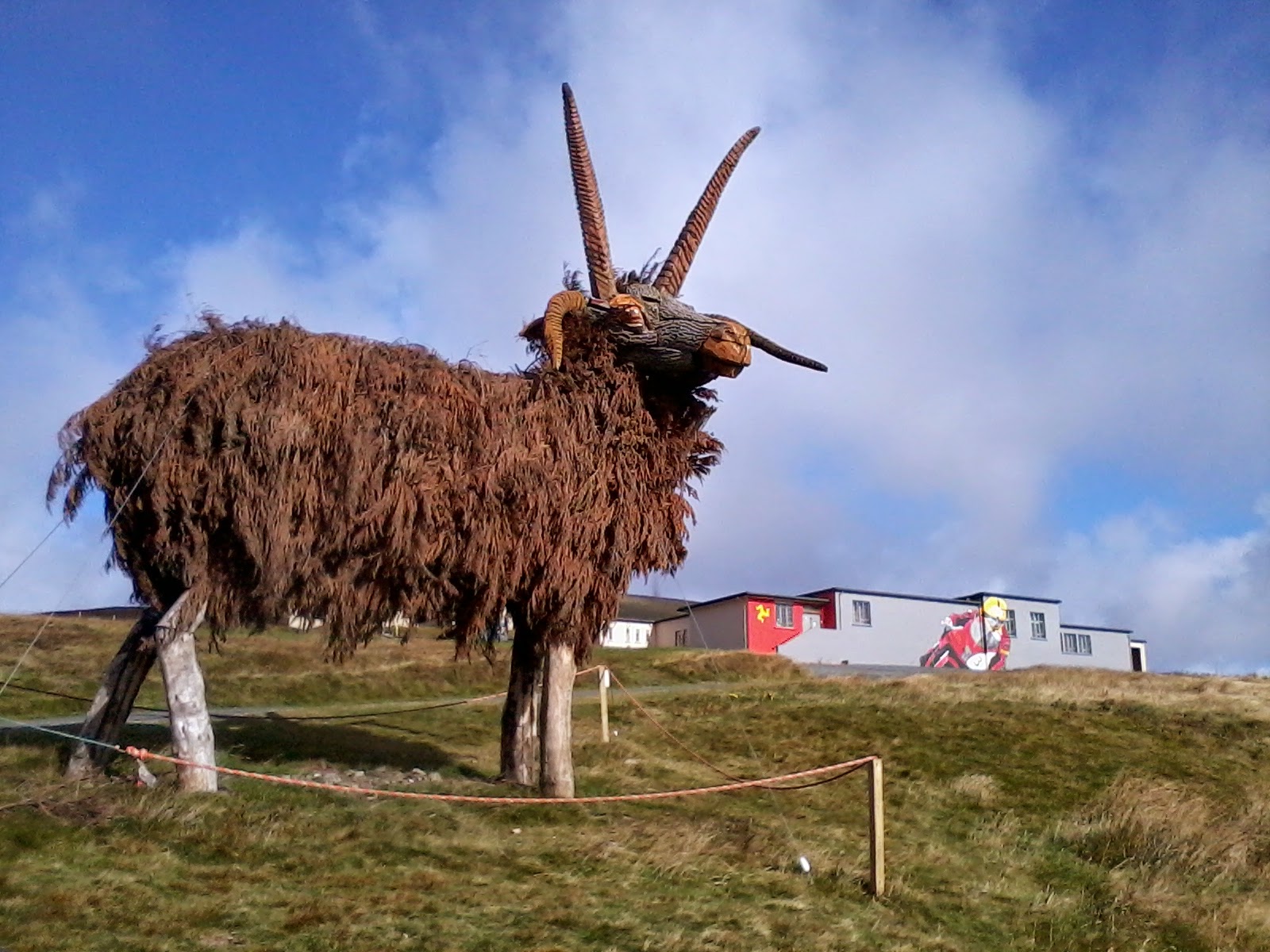 It's a linear route finishing at Port Erin so staying there made sense and also there was a shuttle from there on the morning of the race to the start. Very easy for runners in terms of logistics. The bus to or from the airport straight to Port Erin is only a few £ and about 7 miles away. 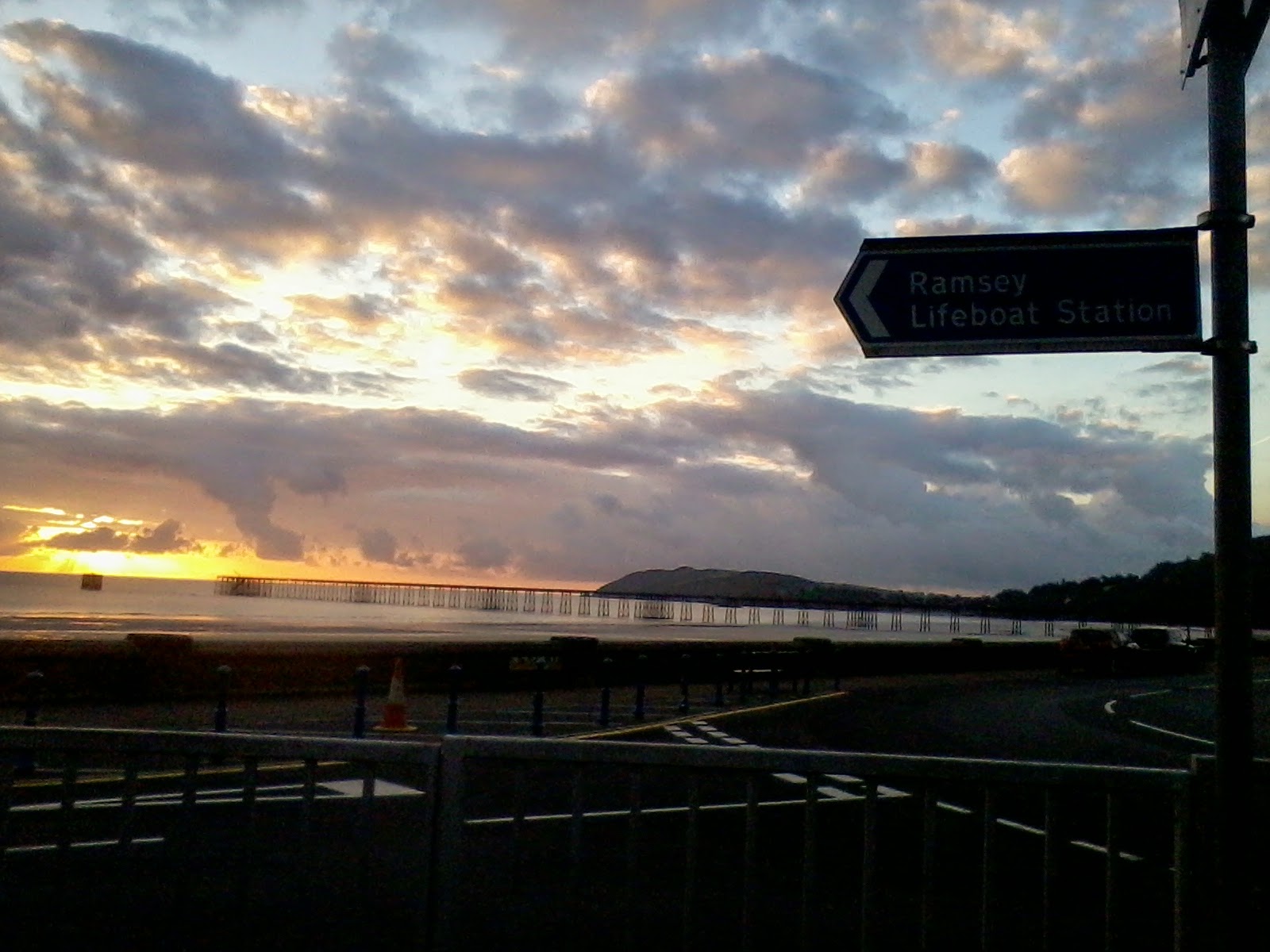 So race day starts with a 6am bus to the start line. There is a 7.30 start and an 8.30 start so those planning to mostly walk or take their time can get going a bit sooner. Kit check and registration in a village hall so sheltered from the elements although at this point it was fairly nice and fantastic watching the sunrise! 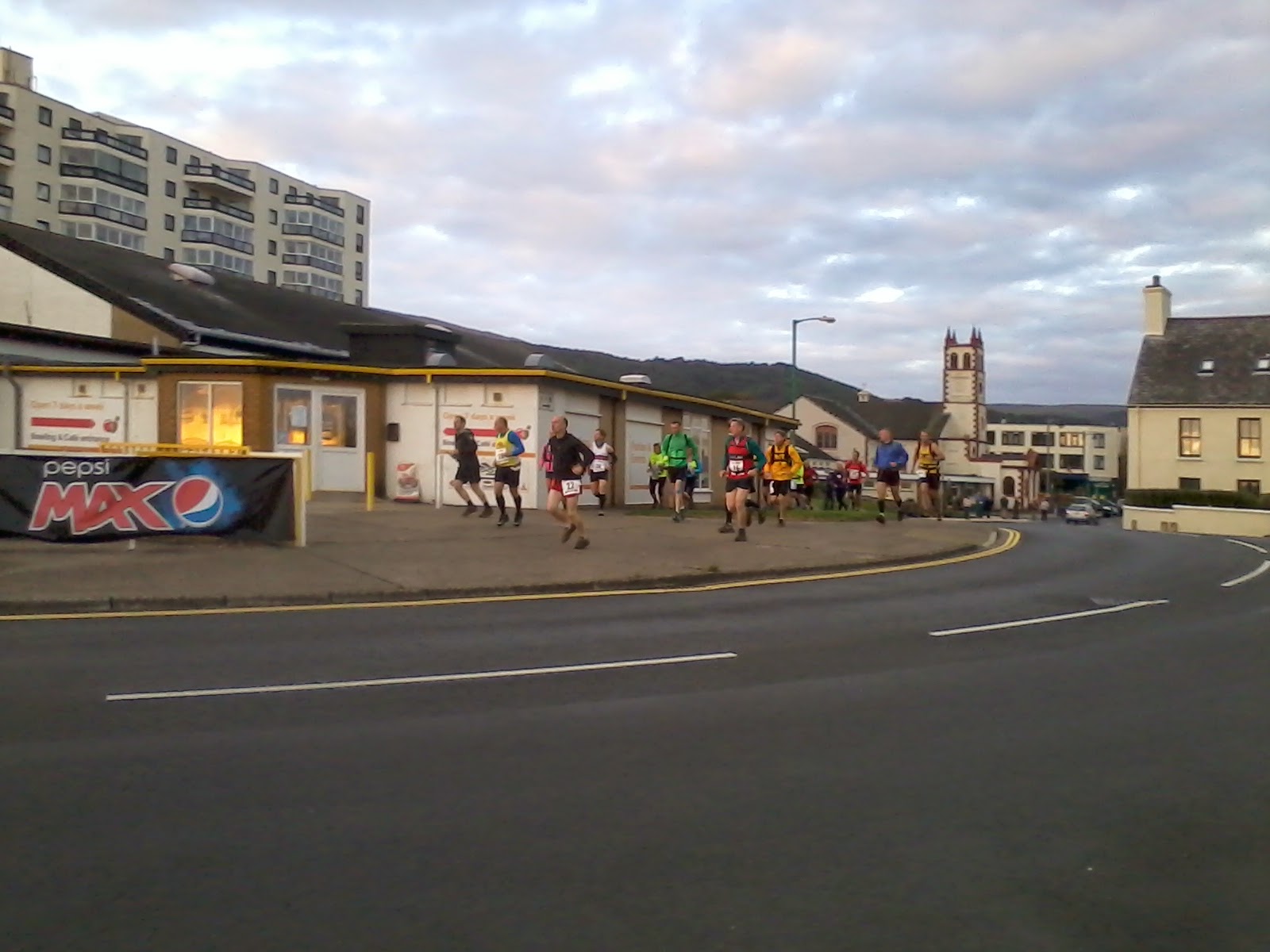 As the early group set out I had a run up the first mile or so of the course for a warm up and then back to the start. The route I would describe as a bit like a fell race initially then turning into more of a trail race around half way then finishing as a fantastic section along some coastal paths! If you want variety and scenery then you're in the right place! There are some flagged sections and on the whole in clear weather it's easy to stay on the route, on the day it began cloudy however...

From the start I led out along the sea front and then on to the first climb, nearing the top of the first climb a runner edged past and off into the mist. The route essentially follows a ridge so although the path was relatively obvious an eye on the map was useful. I was moving well but wary of pushing too hard as I was literally flying to Italy 3 days later for a 100 mile race at the weekend, the plan was to run just as hard as needed if at the front, but try and get by with fresh legs as possible as I was really focusing on the MMT 100.

After the first 10k or so there was another decent climb up Snafell which had been clear on Friday was now in the cloud, being a little bit more like a fell race at this point choosing the best line up the hill was important. I kept seeing some of the local guys along side just a few meters away on a better 'path' so a quick shuffle across to catch back up kept me in the game. I enjoyed the descent next before picking up another little trod wiggling its way along the road side. One thing I did notice was a lot of support at road crossings there were a surprising amount of spectators and friendly faces! 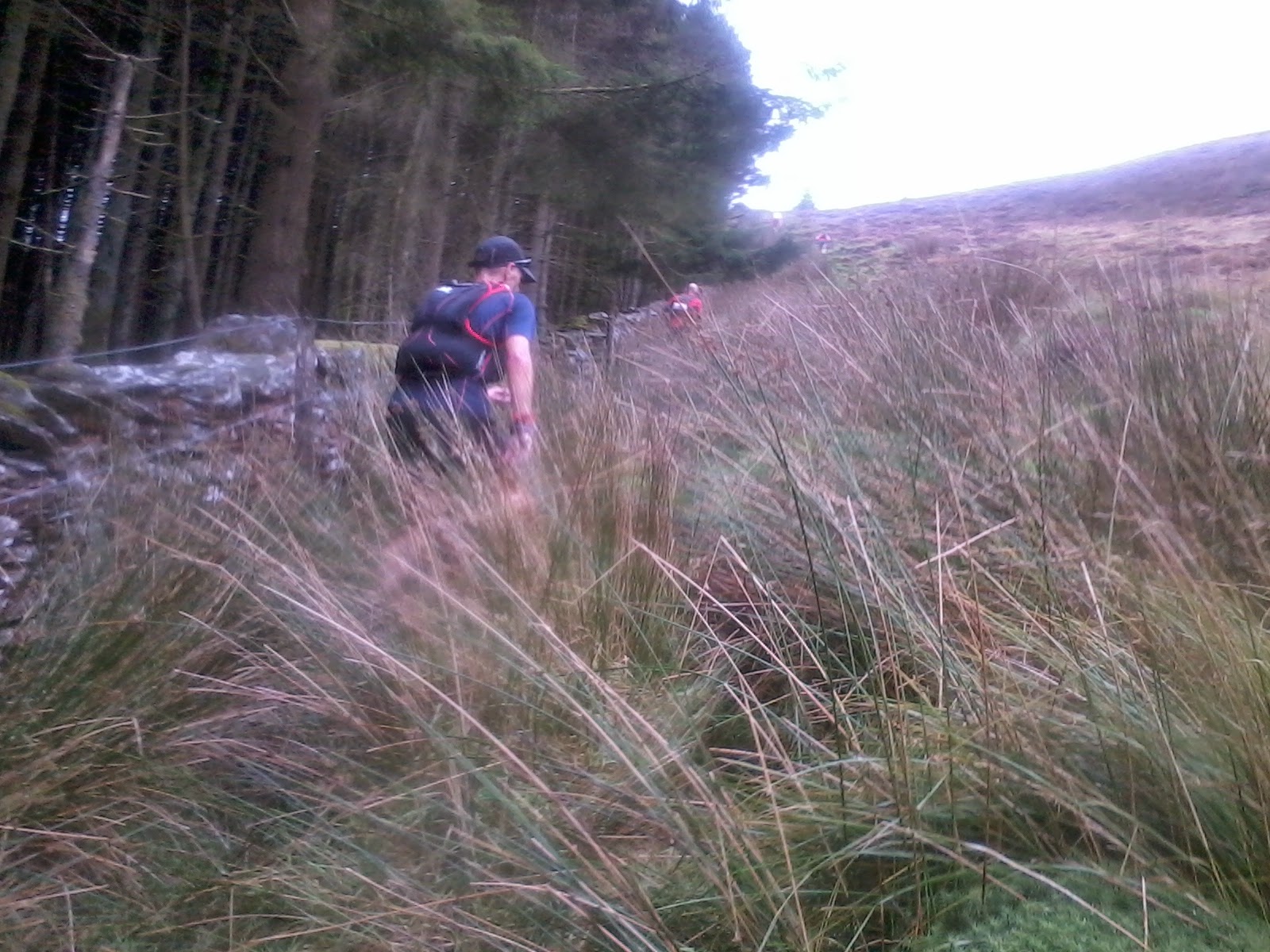 Over the next few peaks the same thing happened, I'd pass runners only to be caught as I was looking for the right trods and tracks to follow in the cloud, whilst I never got lost and was always heading in the right direction it was becoming clear that local knowledge was keeping me from getting any significant ground on anyone. I eased the pace a little and just focused on running smoothly over the rough terrain. There is quite a lot of ascent (2500m) in the 30ish mile course which although there are no giant climbs, means there are lots of smaller ones, some with a bit of a bite to them! 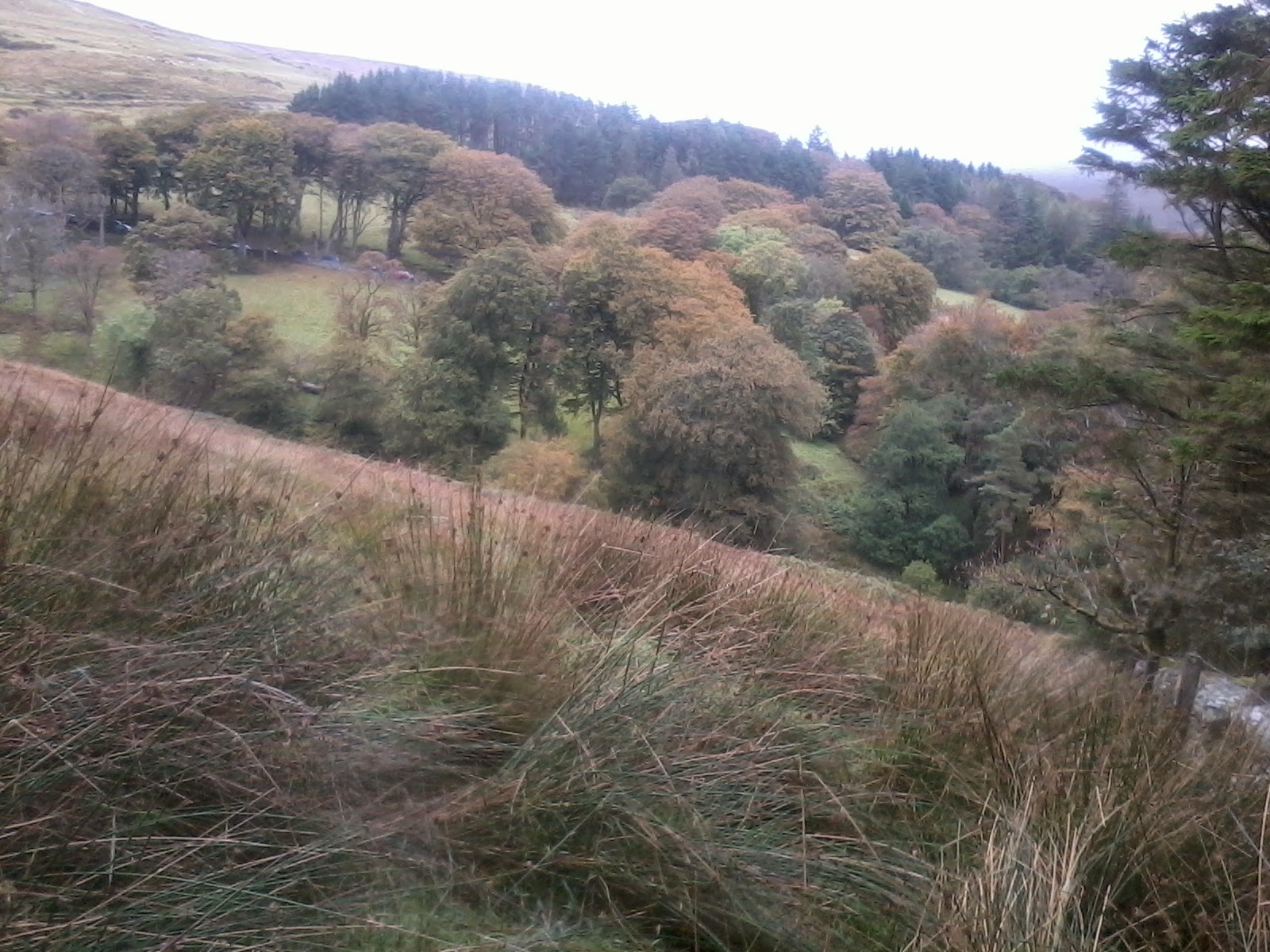 After another ascent up into the mist again I was just struggling to get the best lines across the fells although heading the right way, a few meters to one side or the other would make a significant difference to the quality of track. 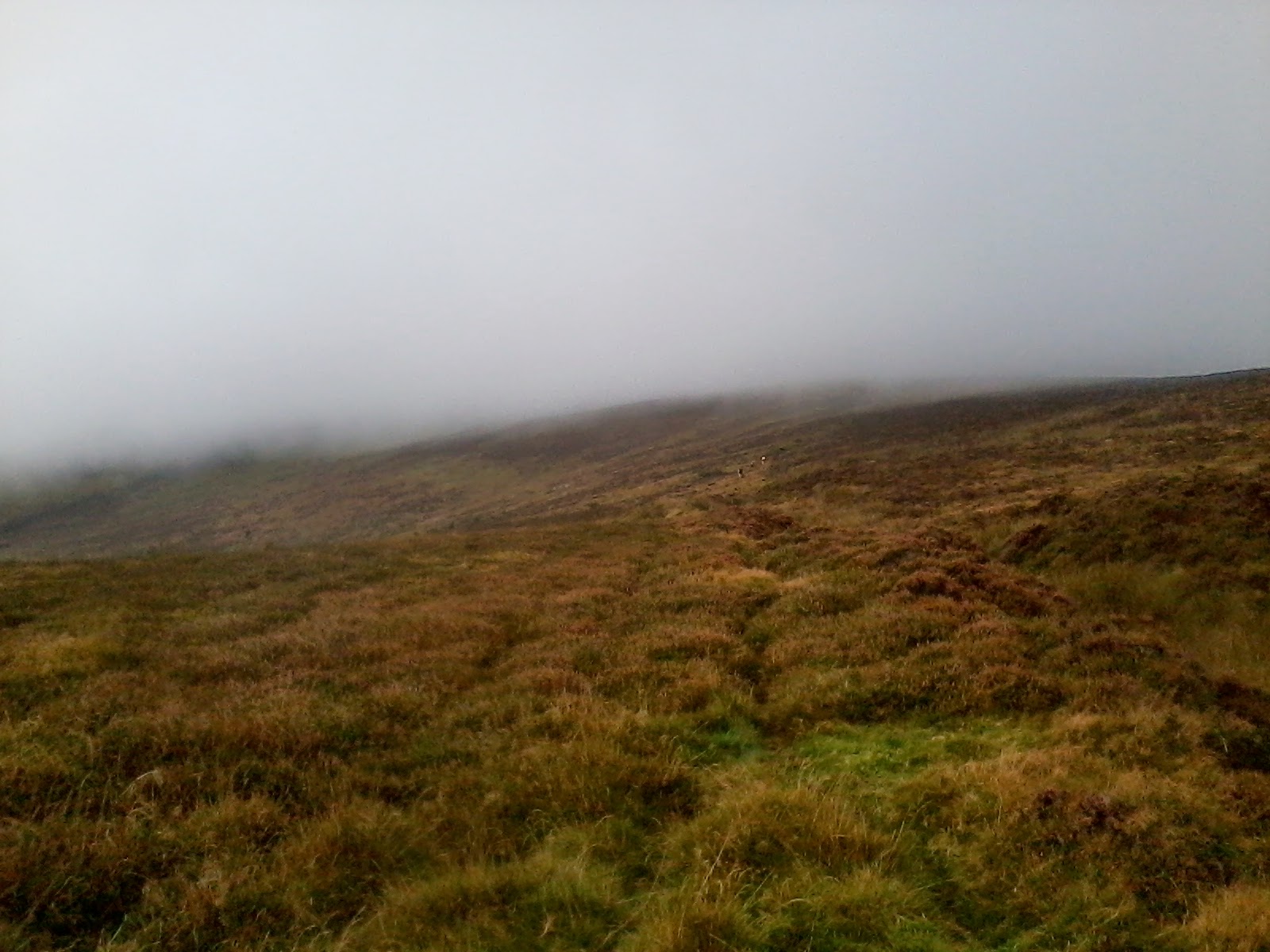 Approaching half way the paths are more defined, and the route becomes more like a trail race, after a section wading through gorse I wasn't all that pleased about (sharp stuff that!) we descended down to a roadside cp. There are quite frequent water stops and they had jelly babies on them too, if you're running it though you'd probably be best to carry what food you want as they are technically just water points. A pretty good climb up through the woods and I had resorted by now to just jog it in to the end and enjoy the route, on a clear day it likely would have been easier to spot the tracks over the fells but I guess some of the locals were happy with the cloud who seemed to know the route well not even needing the maps out! The weather brightened up by now and a good fast section along firm trail led to a road crossing with an out and back up to the top of a hill, It was quite good to be able to see other runners who were just infront and behind and shout some encouragement to each other. I had guessed it to be 8-10 miles from the end at this point and there are only really 2 climbs left and some undulations from there. 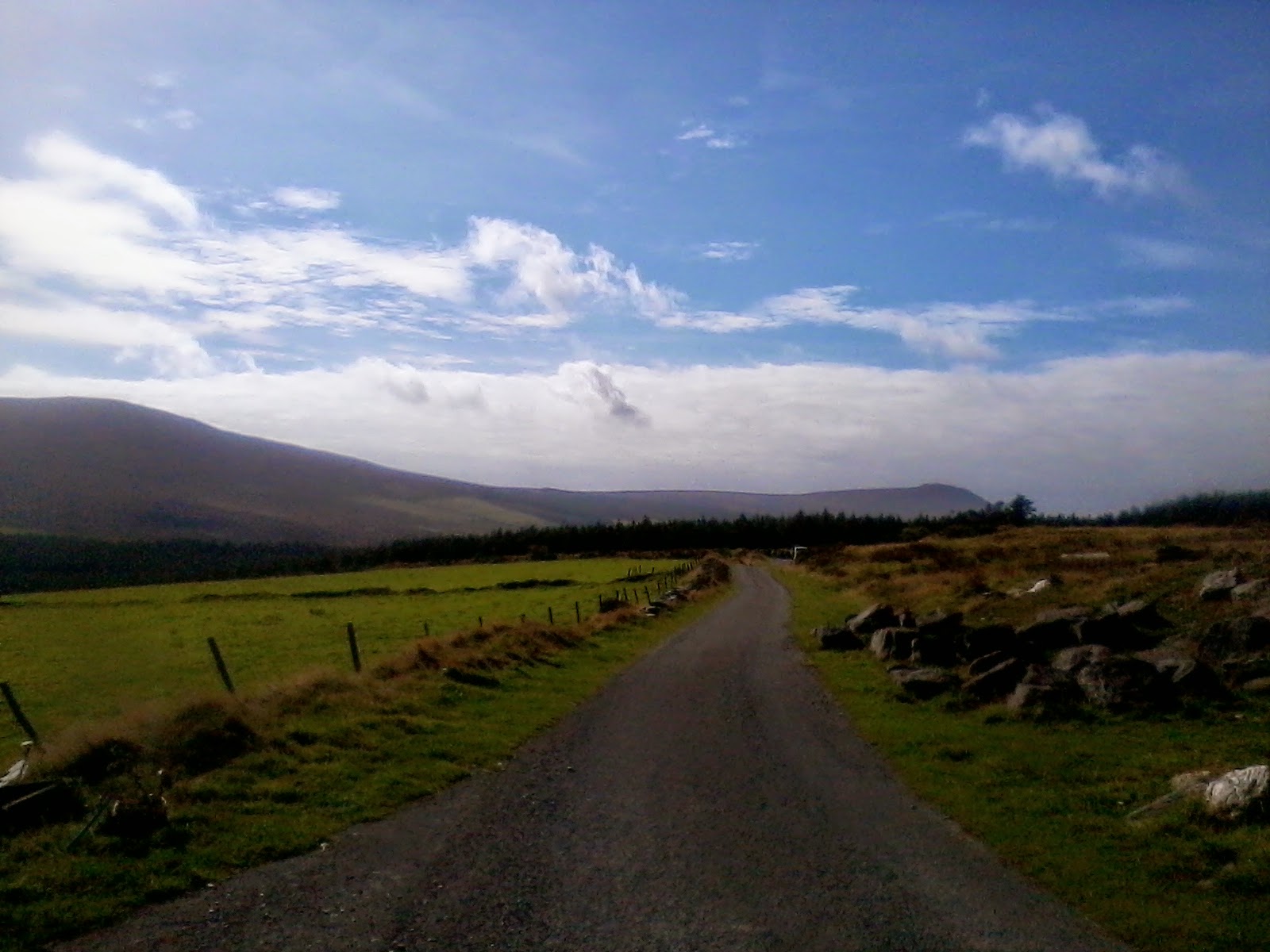 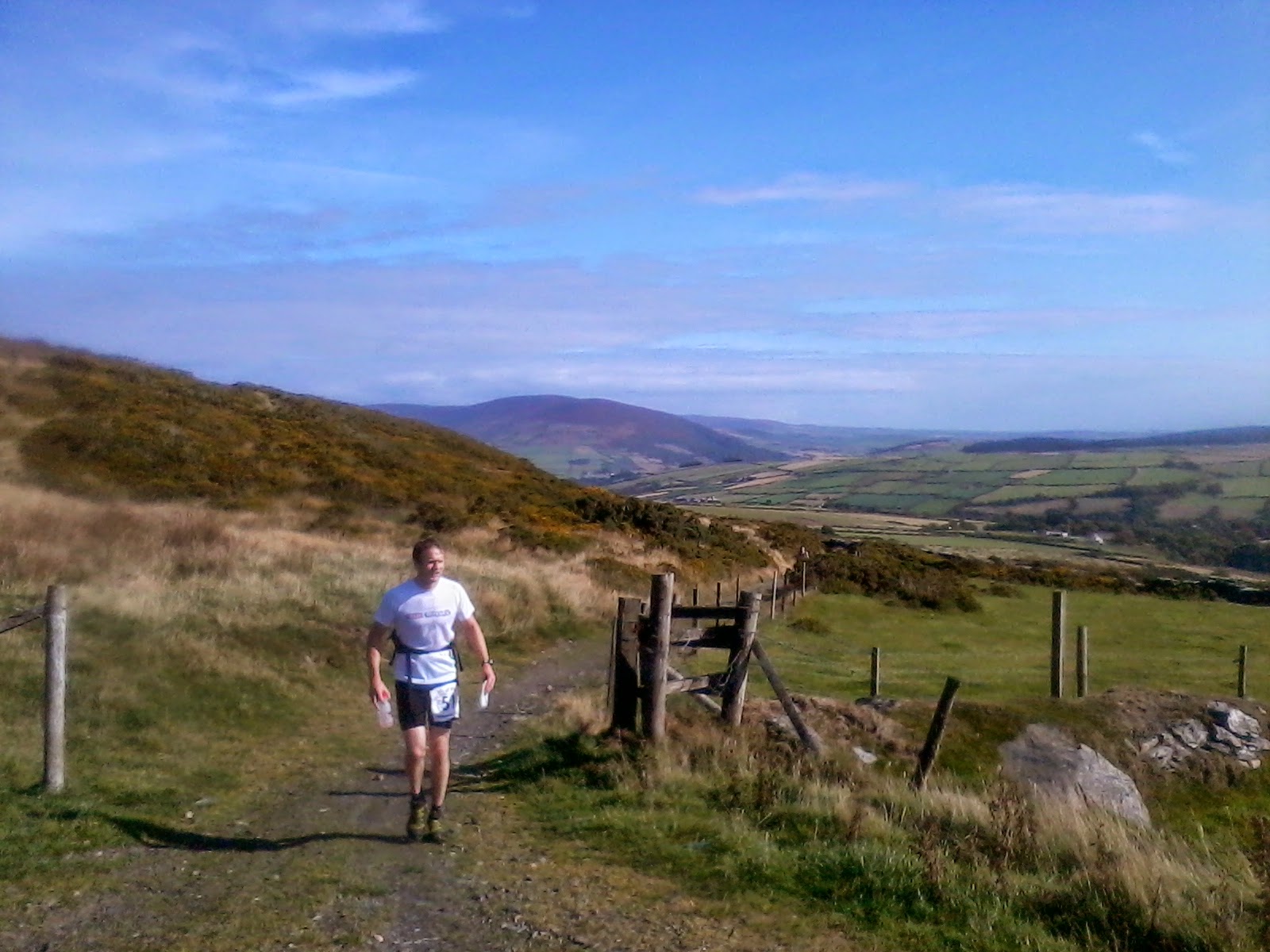 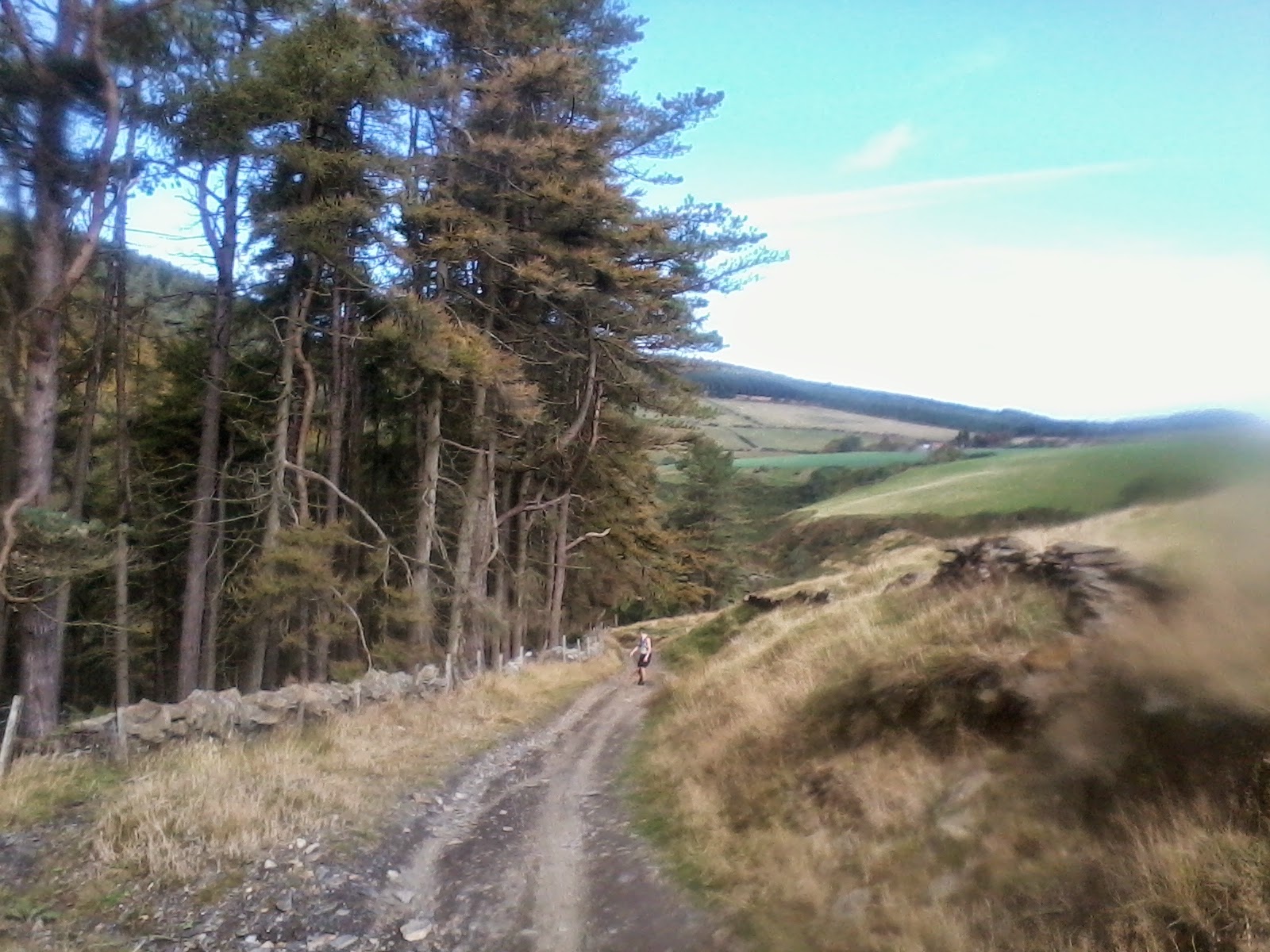 The final 5ish miles runs along the coast with some stunning views out to see! It was fantastic weather by now and I really enjoyed running along this section! There is a very short but quite stiff climb before you gain the final headland and then it's a run around towards Port Erin on nice coastal trail! The finish was a hive of activity with many people out to support and cheer the runners in.

The finishers medal was made of slate and was pretty unique! There were beers for finishers too and everyone just lay about on the grass in the sun clapping in other runners! Overall the event had such a friendly and welcoming atmosphere and the organisation was spot on! The Manx Fell runners and all the volunteers involved did a great job, literally at every road crossing there would be someone cheering! 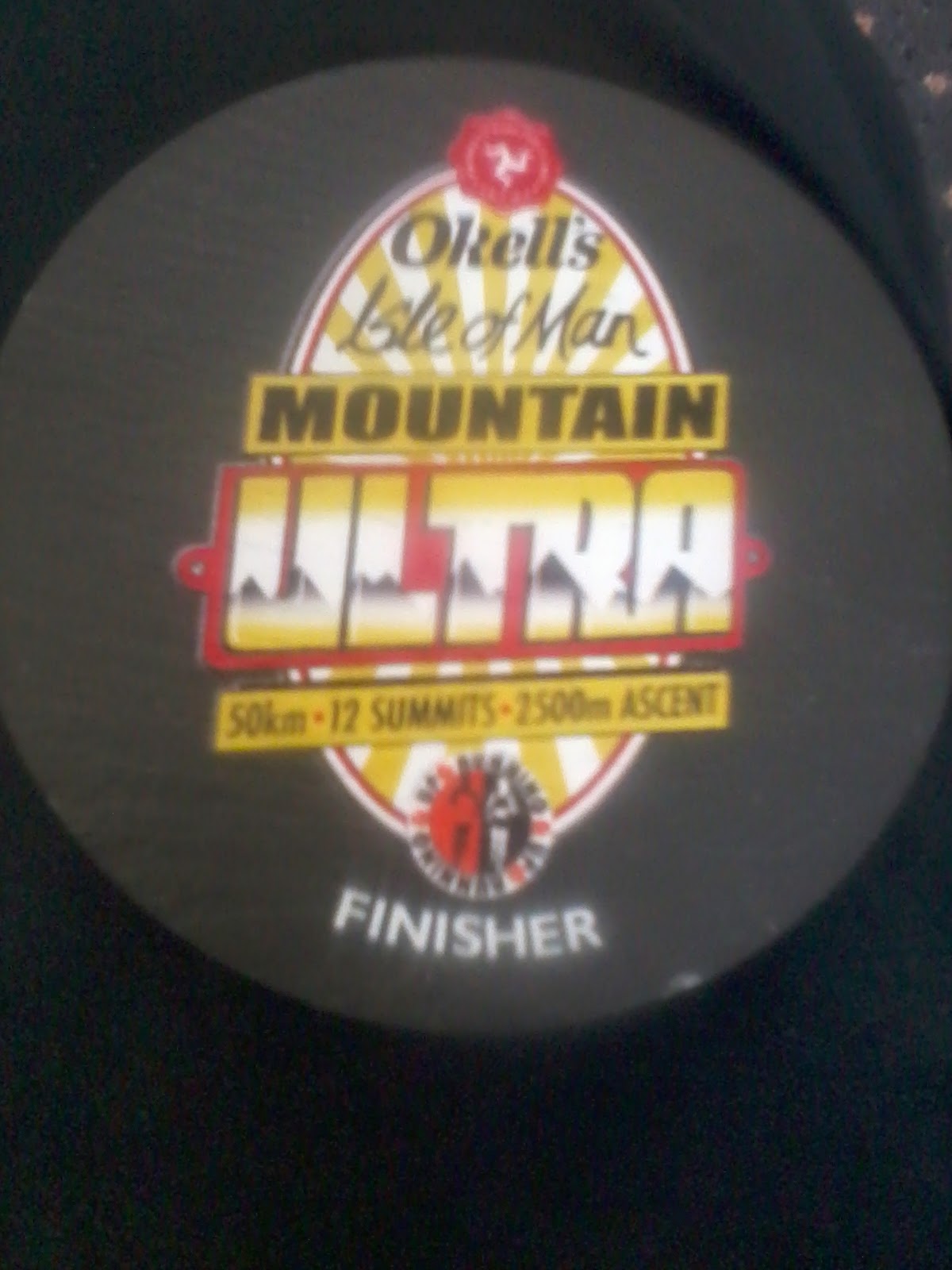 There is time for everyone to get showered and changed and  fed before the presentation in the evening at the Cherry Orchard where it was great to be able to catch up with local runners and some of those who had travelled over too. Lots of clapping all round with some fantastic performances! I rolled in over the 6 hour mark inside the top 10 but having had a fantastic run! It is definitely very cool running pretty much the length of a whole island too!
Jump on the Facebook page https://www.facebook.com/IsleOfManMountainUltra?fref=ts for more information and for next years event! A fantastic running holiday without a long flight!
Thanks to all those involved for looking after us tourists, especially Mark, Lloyd and the Manx Fell Runners!


I think the race would suit someone with a bit of fell race experience yet equally there are some good fast trails to be had later in the race and on a clear day the scenery is fantastic! I think I played the sensible option dropping off the intensity as it meant I didn't get tired legs and could go on to run well in Italy (a win at the Magredi Mountain Trail 100 mile, blog here this week once I get the photos together!)
Posted by Charlie Thatruns at 22:51