It might sound a little bit of a crazy idea running 2 100 mile races in 2 weeks (the last was Magredi Mountain Trail 100 mile in Italy) fair enough.... Though seeing as I've done worse things before and I just love running, especially if there is an odd mountain about, the trails here are amazing, (which is one of the main reasons I'm holding a coaching and training week here too) I just had to get it booked!

I've been to the Ultima Frontera race twice before in 2011 and 2013 (2011 slightly shorter course with less ascent and in 2013 the same course as this) The organisation is great and the flights to Malaga from the UK are pretty low priced meaning it can actually be cheaper to go to Spain than it would have been to head down towards southern England or up into Scotland for example. From leaving the hotel at 8am to being back home by 1pm on Monday it's pretty good!

To the actual race! Registration was on the Friday or pre race on Saturday. I arrived in Loja and grabbed some food before collecting my number etc and catching up with the crew! Headed back to base for a good feed in the evening and an earlyish night. 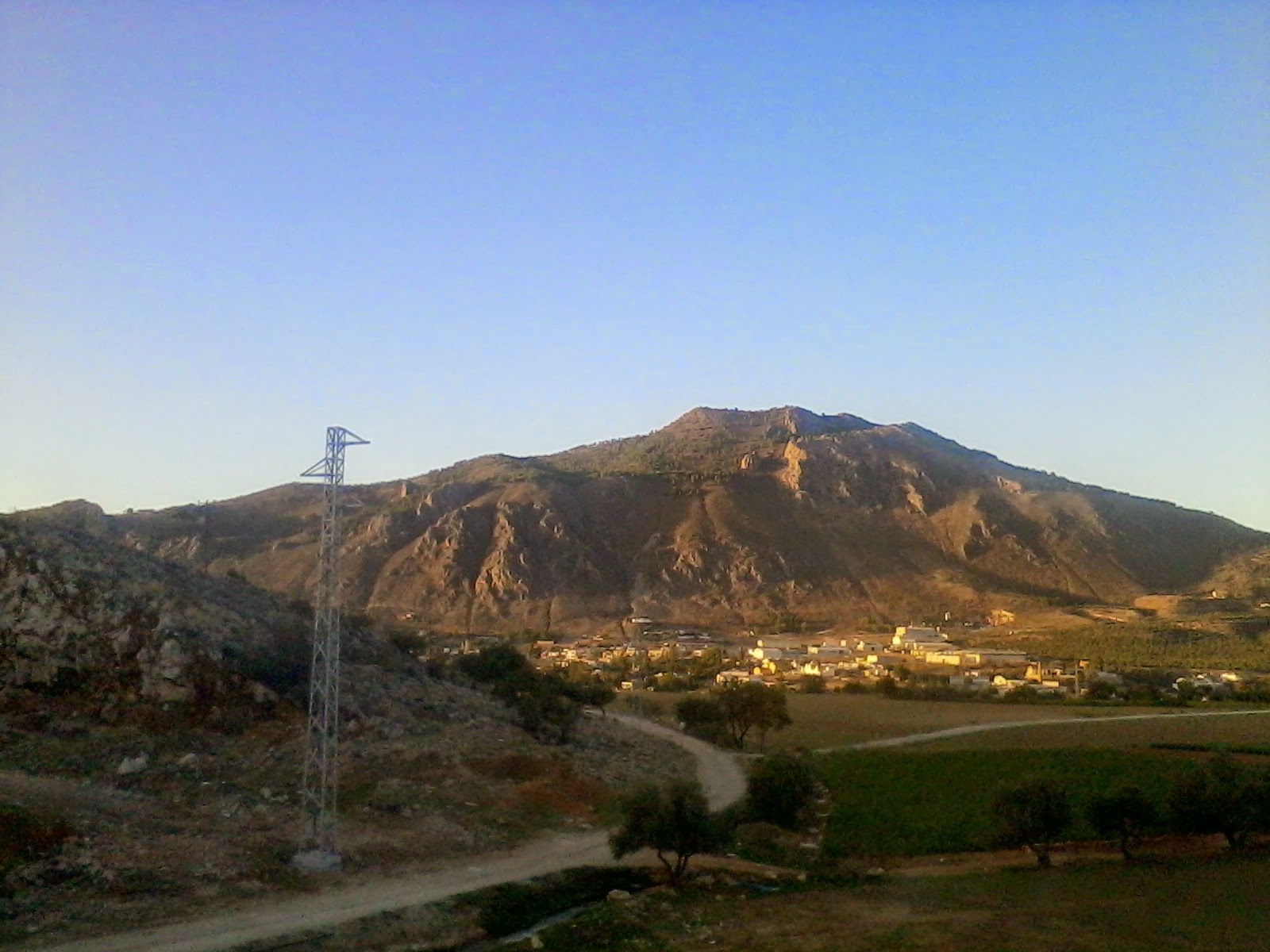 View behind the hotel, the final couple of km comes around the front of that hill. 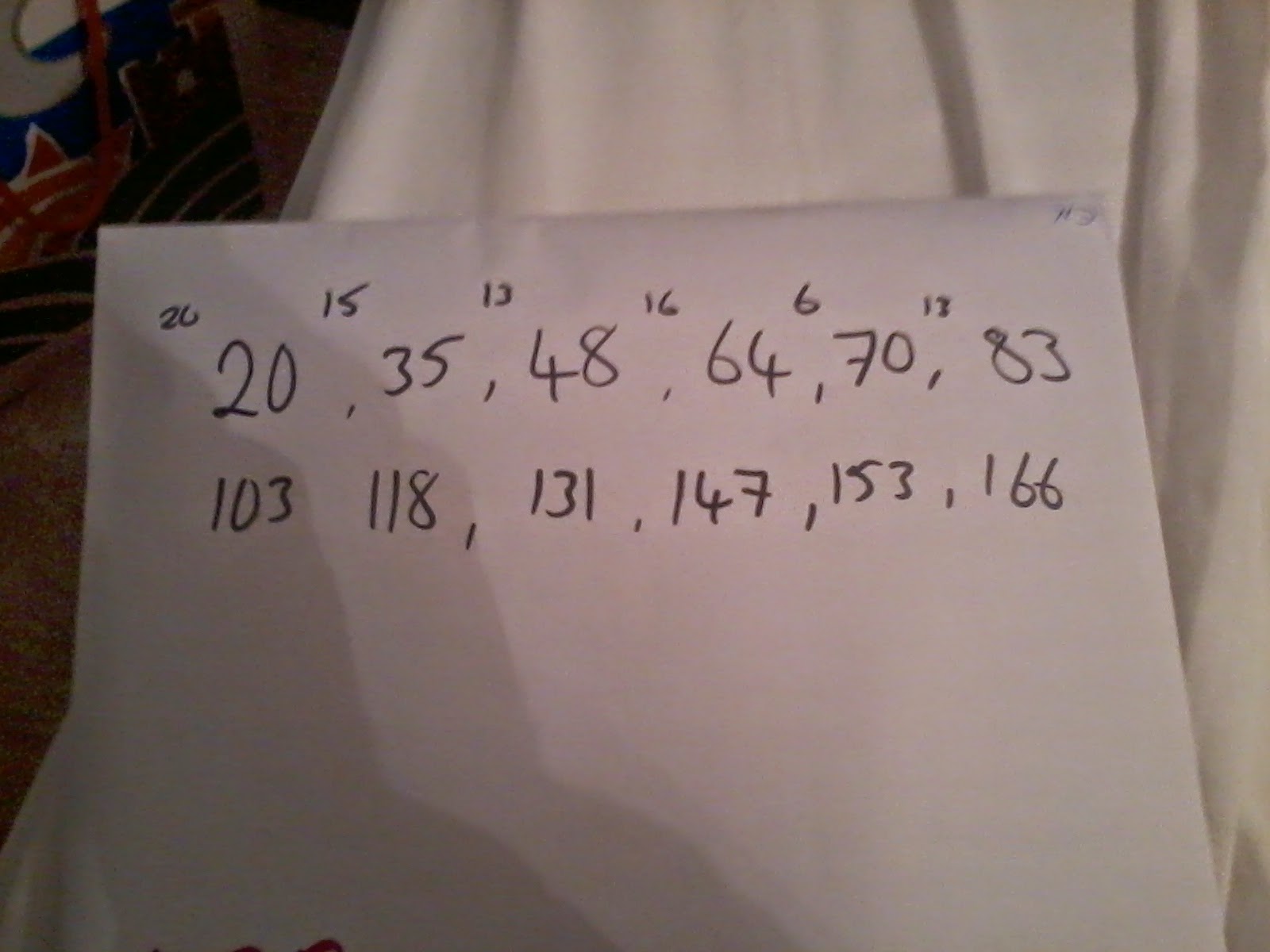 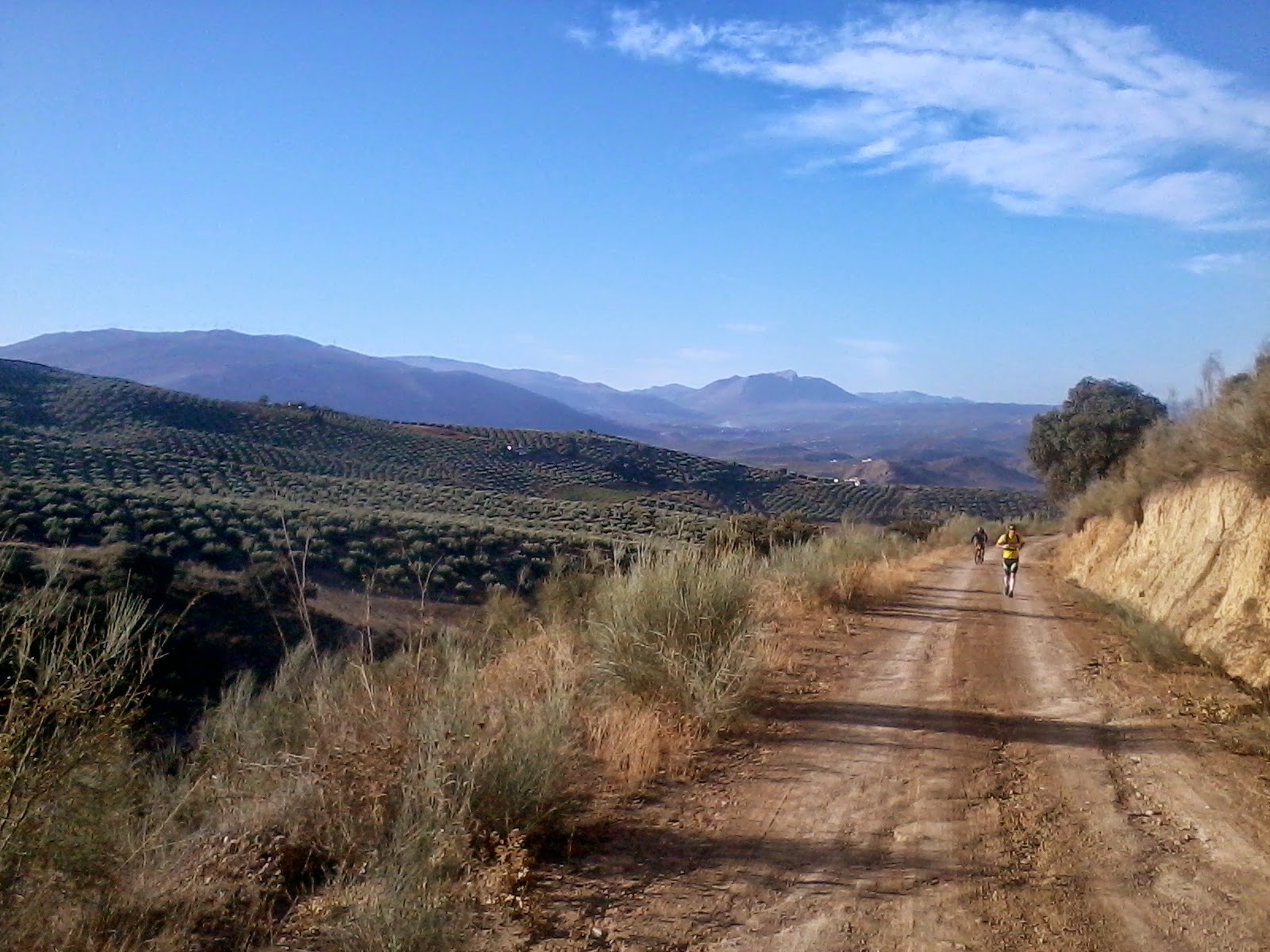 Race started out at 9.15 on Saturday morning with an 83km race, 55km race, half marathon and the 166km all out on the same route for the first 10k, I was running around 6th person here although 2nd in the 166km. In my head I was expecting something between 18 and 20 hours considering the MMT and the hot weather forecast (apparently it sailed past 30 degrees) it felt hot and there isn't a lot of shade until it goes dark!

I noticed that the climbs felt easier than last year and felt really good, I moved into the lead of the 166 although still behind one runner of the shorter 83km event until about 30km where I passed him on the long 8km climb to cp2 and the highest point of the course. 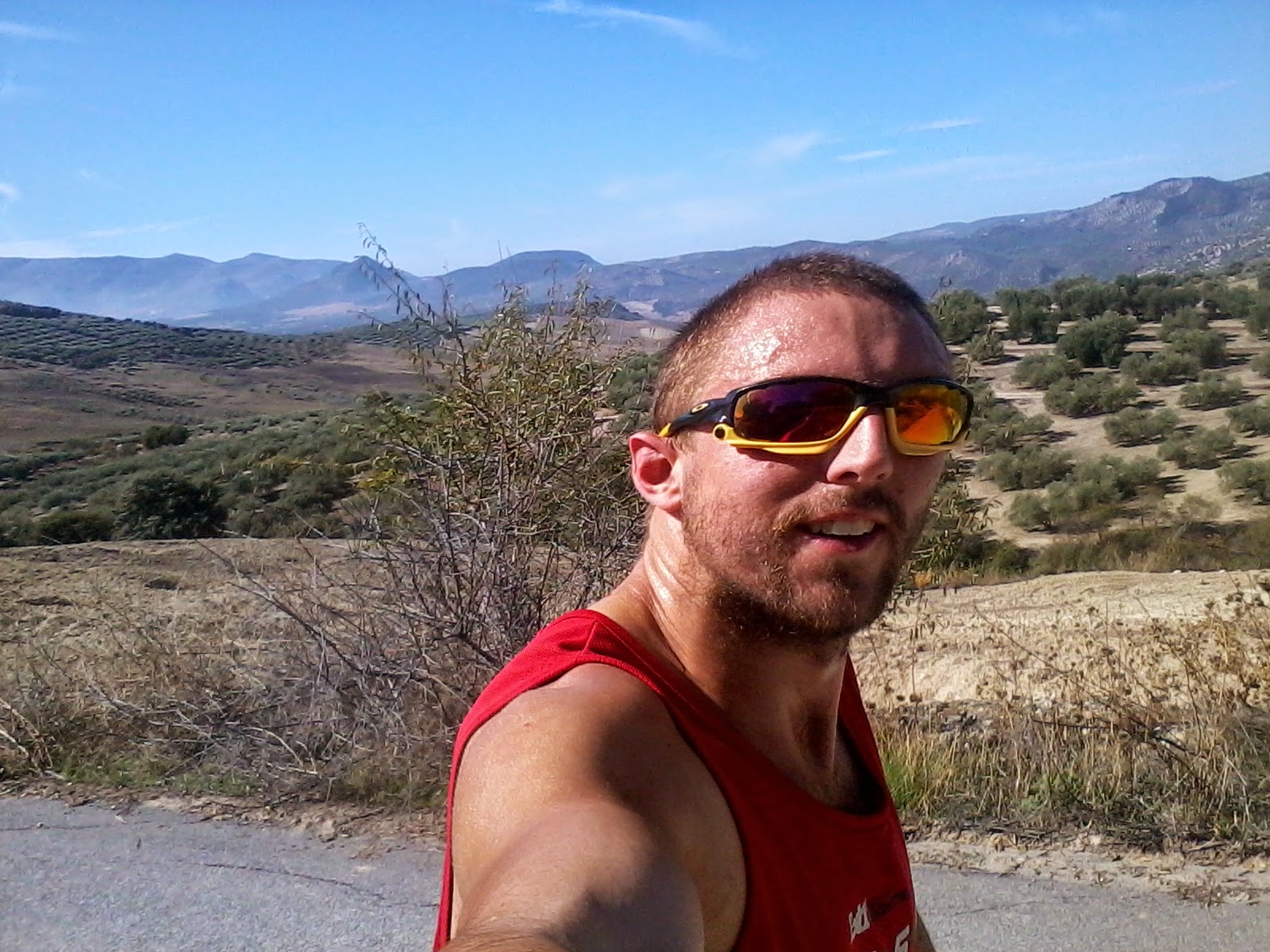 Reaching 35km feeling good I headed off to 48km cp and made light work of the long climb and chewed up the descent pretty fast too. Roughly ... I was getting through 500ml of water and about 300ml of coke between most cps and adding 10 drops of EleteWater to the water. I did have a few additional gulps from the odd fountain as we passed through the small towns here and there too! Next up is a small climb followed by a long single track section before a gradual but exposed climb to the 64km cp, a very runnable section if you can handle the rocky single track. It was getting hot though and I drunk my fluids so eased the pace for 3 or 4km to reach the cp. 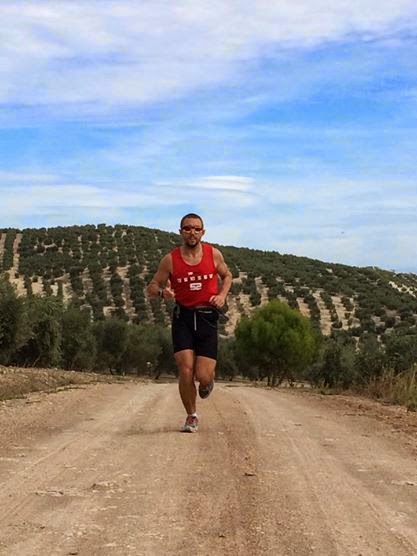 Next up quite a short section about 6-8km to the final cp with little ascent to deal with. I made use of a stream and lay in it to cool down, I was pretty hot but held the pace off and tipped water over myself whenever possible. It was a fairly brief cp stop before running on towards the half way point (aka the finish line in another 83km!) I think a lot of people who didn't finish get to the half way point just as night is arriving and the pressure of a 30 hour cut off combined with the fact that your hotel is a mile away and you're about to set off for ANOTHER 50 mile lap... if you're not totally focused beware of that! I got through in plenty of light, about 8 hours something for half way so about 5.30 in the evening, not too bad. I went in and ran my head under the cold tap for a couple of minutes before topping up my bottles and doing a few mobility exercises and heading out for some more trail slaying! 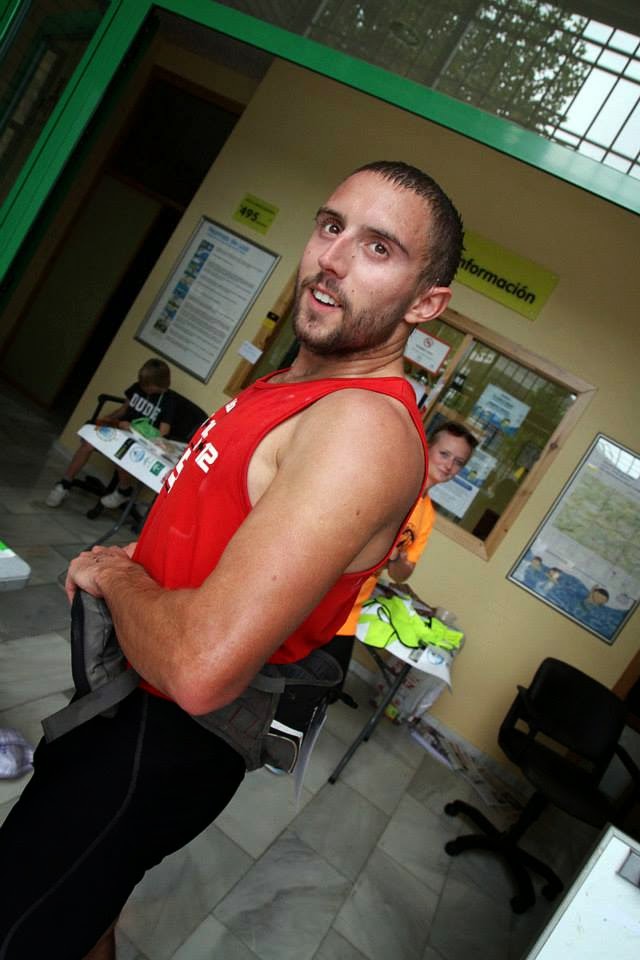 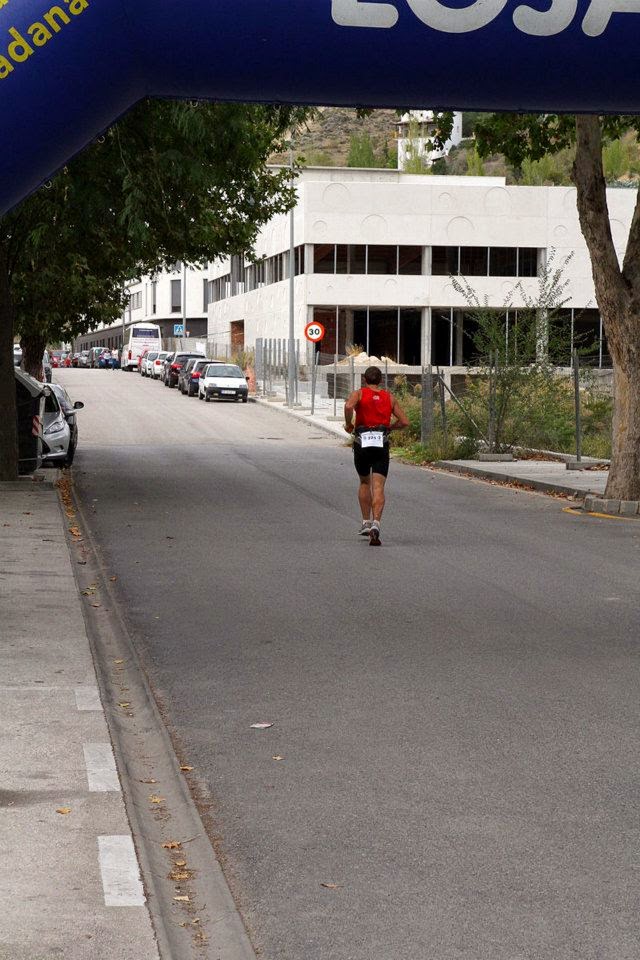 Despite being later in the day I felt hot and made use of a couple of springs to cool off thinking of it more as time invested rather than wasted. I knew I'd moved a little slower here to the first cp but I felt great and arrived at 103km before dark. There is a decent hill between here and the next cp 10 miles away and I knocked it out in about 1 hour 40 looking back. I had received a message to say that 2nd place was over 2 hours behind at half way and I was still moving comfortably. As I hit the cp at 131km I got a message to say that 2nd place had just left the 103km cp. We were both heading to the same cp next although it being my 147km point and his 118km point... Who would arrive first....?
I ran better on this section than I did during the first lap as it had cooled down to around 20 degrees now and it was dark, I was feeling even better than I did during the afternoon! I was enjoying the trail but suddenly felt something in my right calf..... I kept going, few minutes later felt it again... I eased off to a steady run then suddenly again I felt something weird... A little tiny dog had been following me for I don't know how long and made me jump big time! There was nothing wrong with my calf just the dog had brushed against my leg, being dark and totally focused on what I was stepping on in front I didn't expect it at all. Anyway it stopped and ran back and suddenly I had hit the cp, no sign of runner number two who would now have to be at least 3 and a half hours behind. I knew it was 'in the bag' now and changed my head torch batteries, had a quick chat and topped up my water before heading on for the final cp!! Last 14 miles to go! 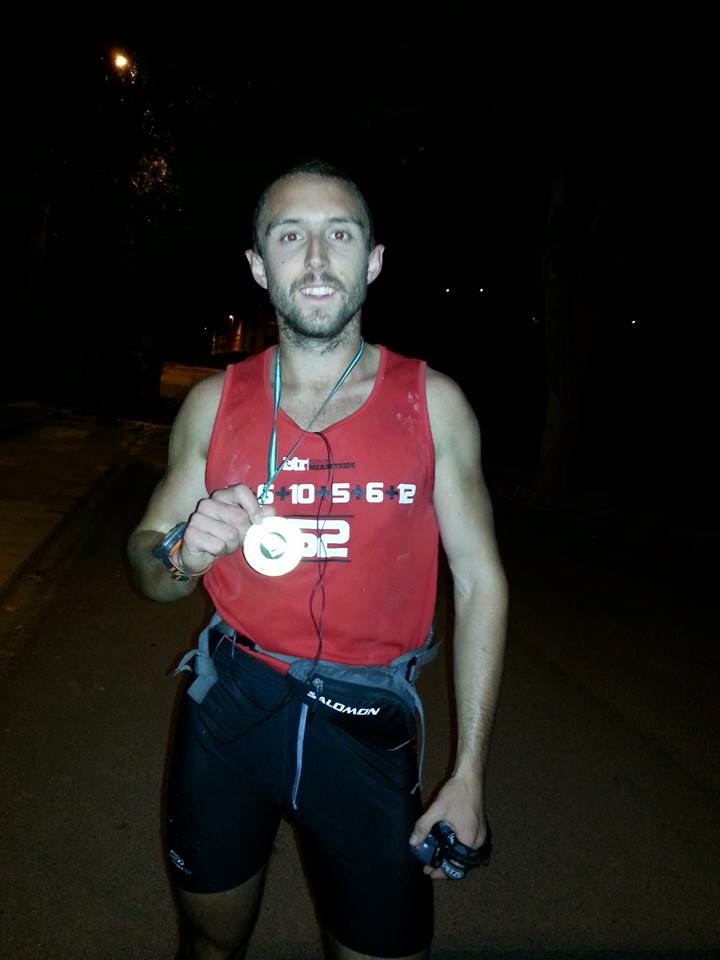 I moved well over the last section and made my way up the gentle climb towards the last descent into Loja. I wasn't sure on my actual time at that point but knew I hit 161km at 17 hours 30 something and decided that the final 5km with a decent uphill could be doable in under 30 mins. I pushed pretty hard for it but came home in 18 hours 2 minutes! Not quite the sub 18 but I was happy that I had run well without any particular low spots other than being a bit hot during the day.

Some might notice I ran in road shoes, the tracks and trails are firm and there are a few short tarmac sections through towns, it's not too technical if you're regularly on the trails and fells although if you're only used to running on the road I guess it would feel quite technical in places.

A few of the questions I've been asked about this one so far...
Did I eat anything? I had a banana in terms of food during the race, calories from 2 fruit juice cartons and an orange juice carton, literally a couple of crisps at a checkpoint and coke for fluids.

Before the race? 3 breakfast 9bars on the morning. The night before I had Spag Bol and a massive sandwich which had everything from eggs to chicken, ham and bacon in it. Delicious!

Is it easy to do a race abroad? The ones I have done YES. Organisers tend to be very helpful from my experience, at the airport or bus terminals etc there is always someone speaking English too if that is a concern you have. It's not too difficult to learn a few words though either and I wouldn't be surprised if someone has an app that translates things on those fancy phones?

So have you another 100 mile booked in 2 more weeks?
Haha... not as it stands, having an easy week and then looking at training and racing plan for next year and then what events to fit in where! Thanks to winning this I now have an entry in the AAUT for 2015 too! Should make a nice summer holiday after the Dragons Back. 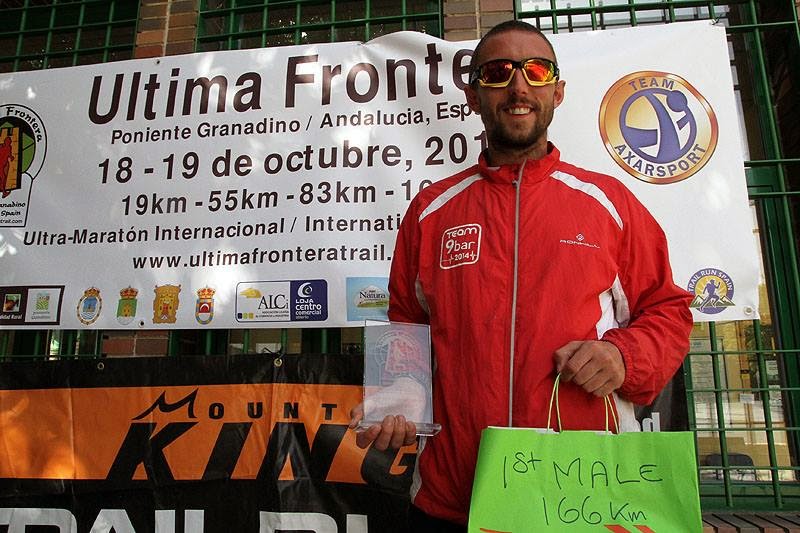 If you'd be interested in finding out more about the trail running coaching week held towards the end of February 2015, to see if it's right for you, hear some more details, just send me a message through the contact form on my website and I'll keep you in the loop!

Posted by Charlie Thatruns at 17:30