At around a month out from my next 100 mile (Northburn 100mile) a trail marathon with 2700m ascent is ideal for a long run, basically like doing a quarter of the 100 mile distance and ascent wise. This is one of the most stunning trail marathons I've done! A lot of the route is more 'off piste' than easy trail, some short steep climbs and some fantastic ridges, and narrow water race tracks. 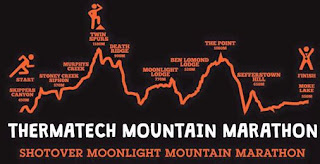 The whole experience is pretty special starting out with a bus into the start at Shotover Canyon, the mountain road is barely wide enough for a small bus and is carved into the side of the cliff in places. Originally dug out around the gold rush times of Otago I believe.

On to the race we start out in a river bed and there's a 20m dash across the beach into pretty much single track for the majority of the first 10km. I didn't expect it to be quite like that and ended up stuck in the line of runners until we eventually got into a little bit of open space over an hour later. I made the most of the steady pace as there literally wasn't room to overtake, you're skirting around the mountain side. I got a few videos and lots of photos. 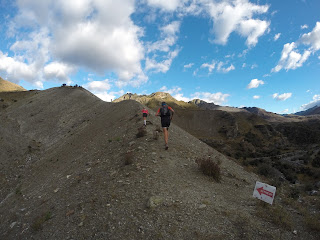 Along with the marathon there was a 30km which had our start and finish but took out a few of the climbs so it became a little bit confusing as to positioning but I never even saw the front of the field by the time I started over taking people I came across on the way to the halfway point I guess I'd reached around 10th. 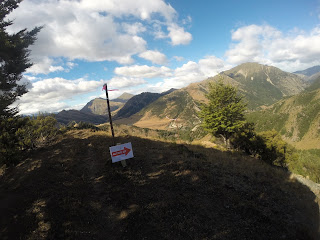 Generally, there was a lot of river crossings and twisty trail through the trees, some short climbs thrown in and all in all it was fantastic scenery. Even a short section through a river to climb a ladder beside a waterfall! I moved a few more positions ahead as we hit a 500m climb to the 30km point before another ridge on sheep tracks and a decent descent to follow. 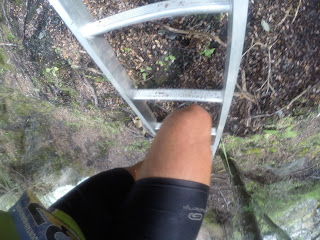 The later stages we reached a 4x4 track and a good climb out and over a hill before I guess around 6 or 7km with river crossing after river crossing which was sooo refreshing the first time but had had just enough after nearly 20 of them! I picked off a few more runners though I think they were all in the 30km race eventually rolling in 6th in 5 hours 20 odd mins. With reflection I did get a bit carried away with the GoPro-ing but I had a great time out there. The race was awesome, the only thing that would perhaps improve it could be a slightly staggered start. 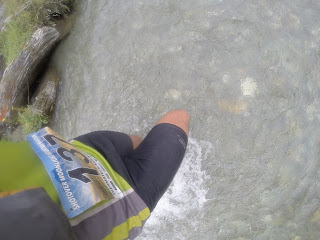 You'd do well to find a more exciting trail marathon anywhere, if you know of one, let me know!
Posted by Charlie Thatruns at 01:05