At 51km with about 3000m ascent the race sounds a good challenge from the start, combine this with some quite twisty trails covered in roots, a lot of river crossings (and the best part of 3km actually in the river) and most brutal of all.... a 6am start time, it starts to sound like great fun! 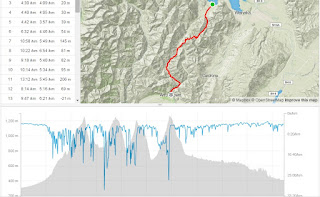 Before the race I'd had a quick look at the route and recced the first climb out and back. I'd noticed that last years first place was over 7 hours and thought it sounded slow though after reading a blog it had been a wet day so I guess that costs a bit of time. The Motatapu track is a popular hiking trail and I read a description which sounded all good apart from one part which said 'at Xkm you can enter the river and follow it OR climb out of the valley and take the high route' ... I first thought ok, a dry river bed? Maybe with some water in there in odd patches?

So the race has about 2.5km on wide gravel road before hitting the trail properly. I decided after what happened at Shotover Marathon I best start right at the front as the track is pretty narrow and twists it's way undulating along a trail against a small river and it would make any overtaking difficult. There are 4 main climbs, the first goes from 300m to over 1200m in 12km and you'll notice from the profile that the last 20km is mostly downhill (although not quiiiite that straightforward) with 30km - 40km mostly actually in the river or along the banks and higher sections of riverbed out of the water before a relatively fast last 13km on 4wd track with numerous river crossings around knee deep.

So 5.45am about 150 of us gathered in the dark at Glendhu Bay near Wanaka. A brief briefing again mentioning this river business which at this point was still a mystery to me before we lined up ready to go. I set off running on the shoulder of a guy for a minute or so before moving ahead on my own, the sound of hundreds of footsteps behind as I headed into the darkness. I knew the first checkpoint and just beyond from my recce so was happy to lead and pick up the marker poles every few hundred meters as we weaved along next to the river. At a gate in deer fence there was a guy with me and then a gap maybe a minute at most to the next torches. Soon we were in the woods and the twisty, rooty, trail kept us on our toes, it's very narrow and weaves along undulating but generally trending uphill.

Suddenly the trail disappeared and I found myself dropping into the gully down a steep bank seeing the trail to the corner of my eye. I couldn't stop until the bottom and turned around as the guy just behind shouted and I scrambled up and caught back up. We stayed together and chatted a little on the way to the Fern Bern hut CP1 at around 10km and had to do a kit check so bags off and a quick run through of the 'extensive' kit list (more than I've had to carry on most 100 milers but as long as everyone is out having fun!) The daylight was breaking through and torches were off. 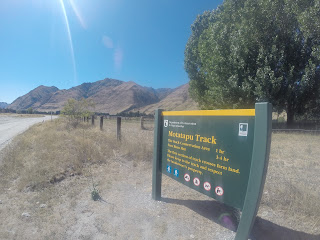 We were on our way within less than a minute I guess and continued to climb. About 30 mins later we hit the first decent descent and I built nearly a minute or so of a gap and started the next climb at a comfortable pace allowing Chris to catch up with a runner back in the distance visible. We stayed together up the climb, I was interested to see if I'd build another gap on the next descent or whether perhaps 2nd had just stopped briefly perhaps. 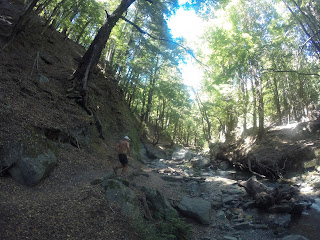 Again hitting the 2nd descent at almost 20km I pulled gap between us and again a comfortable climbing pace brought us together again. I didn't want to try and push a real gap until this much talked about river section if possible. There were some stunning ridge sections and some impressive valleys and peaks around us. I was itching to get my GoPro out but didn't want to get distracted again. 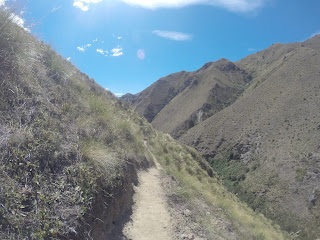 We dropped down from the 4th peak and down to the river. We were making good progress and then here was the river. Two signs one saying high water and one for low water level, so we took the low water level and I plunged waist deep into the river. After a bit of wading it was actually possible to jump from rock to rock in places and scurry along the bank from time to time though you were getting wet no matter how you did it. After a while we hit the penultimate checkpoint, we were able to take the 4x4 track that was parallel to the river although this still crossed the river numerous times.

I was pretty happy to stretch the legs out and push on averaging just over 7 min miles for the last hour of running and river crossings. I managed to build up a 6 min gap and 2nd place Chris who I'd run with earlier kept well clear of 3rd. 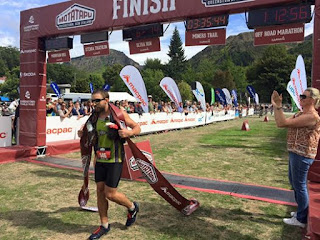 The finish in Arrowtown was pretty busy with plenty going on. Over 3500 athletes with the MTB race, Triathlon, Marathon and the Miners Trail 15km all finishing at different times after we all had staggered starts. I had about 6 hours to wait for the prize giving so walked into the old town and had lunch before coming back and doing some clapping, having a massage, lounging in the sun and catching up with friends.

Another stunning race in NZ. I think if I had to choose between this or Shotover I'd go with this one purely because it's a bit longer and finishes within easy walking distance of town (just about an ultra by about 11km ;) ) ideally though I'd recommend the both of them!

For me that's basically my last longer run before the Northburn 100 mile in 2 weeks. After that I'm back in the UK on the whole before hitting the Alps in June for the next trail run coaching week (see www.charliesharpe.co.uk) for the details if you're interested.

Posted by Charlie Thatruns at 02:27