Back in 2008 I spent almost 2 years in New Zealand, ever since I left I always wanted to go back. I was mainly bouldering then, did some hiking too but wasn't really a runner. I decided that to make it a worthy trip I'd pack in a few races and base myself out in the mountains of Wanaka to train.
The Northburn 100 mile has been running for a few years now and has grown it's reputation for being wild and tough, the hills are very exposed, tracks are generally a bit rough underfoot with some off piste tussocky, spear grass lined patches here and there. In terms of the route it's just a slither over 100 mile with around 10000m of ascent... Some people were claiming 11 but I clocked on just under 10 including my little diversion. Weather-wise we got dry conditions with some strong winds on the top, (i got blown over a fence and had to crawl at one point) it was pretty hot down in the valley. Had it been less windy it would have been hotter... That would probably have caused more issues than the wind. 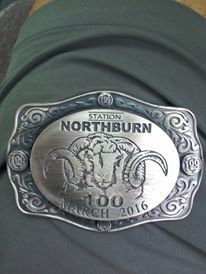 Kit check and registration was Friday evening then a very entertaining briefing from Terry, one of the organisers... We got a good and detailed run through of the course along with advice like
'The entire area is a big mass of hazards for you runners'
'Beware of the foliage'
The course had grown a bit since previous editions apparently an extra 1000m of climbing had been squeezed in. To give an idea of difficulty  there is a 48 hour cut off.
Come Saturday morning 6 am start we lined up along with 50km and 100km runners and set out into the dark. There is an initial flat 5km loop before heading off on the first long gradual climb to 1600m at about 25km. I'd ended up with the lead 50km runner until about 15km in where I moved ahead as we reached rougher ground. I hadn't expected to be leading ahead of the shorter races too but was happy with my effort levels and took it as a good sign. It was cloudy up high at this point so I just kept paying attention to the markings and passed through a checkpoint before starting to descend. It all went fairly smoothly I cruised down, kept sipping through water and grazed off a bag of jelly snakes and reached another CP where the marshal informed me I was starting the 'loop of despair'....
I jogged on up the climb and saw the leading 50km runner about 5-10 mins behind though nobody else as far as I could see. The course weaved around a gully and I followed the tape to a good track which started to descend. The previous checkpoint came back into view and I thought great! The path met the previous track I'd run up earlier and I carried on down to the checkpoint where the marshal informed me I shouldn't be here again!!! I'd been confidently following markers the whole time and couldn't figure what had happened. After a minute or two trying to figure out what happened I saw the map in the car that the checkpoints each had. I took a look and set off to retrace my steps back up the hill.

I'd done just shy of 3km extra and about 20 mins when I saw a guy I'd meet a few weeks earlier heading towards me past a marker. I stopped him and we scanned around to see some markers over the fence in the next paddock. I ripped a couple of the markers and tied on extra so it was more obvious. 2 runners had gone the correct way off the 50km and me and Paul had gone wrong, at this point nobody else has reached the turn. From this point I was stopping at nearly every bend and twist to look for markers and had a really stressful next few km. I then saw a lady running who wasn't in either of the ultras but was in the half marathon and that confused me even more... After stopping and starting, I decided just to carry on to the end of the loop and see if I was on course or not and decide what to do from there. Luckily turns out I was on track though two 50km runners had finished before me. (Well done Lucy and Paul) 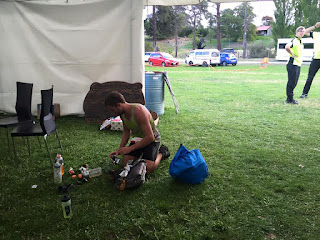 I'd planned to throw down a tin of rice pudding here in an attempt to eat more than I usually do. I had about a third of a tin but decided that wasn't going down well and headed out on the second loop. I was trying to regain my focus after losing around 30 mins on loop one I was concerned about the markings and really hesitant at junctions. The course layout is pretty confusing with various loops crossing and weaving all over. The maps that cp staff had were good, would have been no problems at all if runners were given those to. I didn't take any wrong turns for the rest of the race but being in the lead meant I was the first at checkpoints and together with some of the marshals we had to figure out where I was actually meant to go next, had i not double checked with a particular checkpoint on loop 3 I would have just been sent the wrong way. They called to HQ to check where to send me as I was certain I should be climbing more. 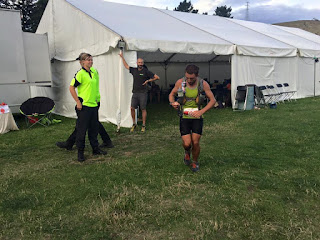 Anyways... I was out on the second 50km loop (different to the first) and was still on track for what I thought would be a sub 24 hour time. I reckoned if I did the first 100km in 12 hours I would have 12 hours to do the last 60 odd km loop which would be fairly easy. Moving up the next climb back to 1600m I felt like I was crawling, I regretted the rice pudding and decided from there I'd stick to liquid calories like usual. I lay down in a stream for a few minutes to cool off and it was like hitting the reset button. I finished the rest of the climb and here came the windy ridge... It was here I got blown over a fence then a little later had to crawl on my hands and knees along a section of the ridge as I just couldn't move into the wind. I've been blown off my feet a few times by strong gusts but this was sustained strong wind. I was feeling good and treated to some awesome views of leaning rock. There was a van checkpoint here and the guy inside couldn't get the door open against the wind. I confirmed the direction and headed downhill one more.

I felt really strong over the next few km and the second 25km of the loop just breezed past, it wasn't long before I was heading back in to the main aid station and finishing loop 2. The watch was showing 107km in 12.44, considering my early detour I was happy with that and topped up my water and got more batteries etc for the night that was to close in shortly.
Another long climb here about 12km gaining 1200m. I knew there were 3 more decent climbs on the loop but didn't really pay any attention to the time from now. I was visiting the same checkpoints as the previous loop but a totally different order. As I was now crossing paths regularly with people still on the previous loop I spent a lot of time trying to check I was going the right way. The last thing I would have wanted was to go off course. The terrain was pretty similar aside from a little descent to a water race where a few safety ropes had been rigged up to stop anyone jumping off the edge. Soon enough I'd hit the little mountain hut checkpoint TW for the final time after the two climbs and was just 20km from the finish including a final climb. I'd had word that I was miles clear of 2nd and so enjoyed cruising down the long descent to a final cp. Just one more hill! Everything felt great and from the top it was obviously all downhill to the finish and I was passing many runners coming the other way who were just starting out on their last 60km loop. I shouted a few 'well dones' but tried not to give away that I was about to finish. 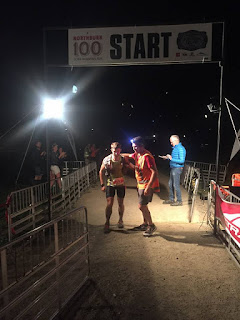 I rolled in just after 4am finishing in 22 hours 11 mins. I'd like to say a huge thank you and well done to those involved both organising, competing and supporting! Together it all added up to a great event! 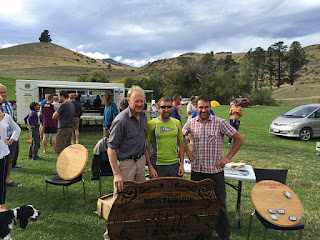 I've not counted recently but it's getting toward 20x 100 mile or longer races that I've done, all my highest placing and generally best runs have been on majority liquid calories and minimal solids. Bottom line for the longer races you need to be putting calories in one way or another, I hear of a lot of people struggling to fuel properly which can lead to some epic drops in pace. When I was doing my first couple of years of ultras I ate a lot more solid food I guess as I was less fit my stomach could keep up with digesting stuff whereas now I can keep a much higher average pace it seems easier to stick to liquid.
Heading back to Europe soon, my next trail run coaching week is in June (details on my website) and I've a few races lined up before then leading up to Andorra Ultra Trail in July (170km with 13500m ascent)
Should be interesting!
Posted by Charlie Thatruns at 18:01