Whilst being over in Croatia for the 100 mile of Istria I thought I saw a race for the following weekend in the neighbouring country Serbia, turns out I got my dates wrong and it was two weeks after! Probably a good thing really. It meant that I had time to travel down Croatia and check out some potential locations for a coaching holiday and explore some mountains in Montenegro also, before flying up to Belgrade where the race organisers had arranged for me to meet some local runners who were traveling down to the race location on the Thursday night.
Before the race I'd been sent all the details of the race in English and everyone I spoke to was incredibly helpful and welcoming! The race itself begins in a small town called Ljubovija close to the Bosnian boarder and finishes at a mountain hut nearby so the race has a lot more uphill than downhill.  We arrived around 10pm and got registered which was quick and easy before I headed to my hotel up the road.

Before the race after looking at the course details, I'd thought anything just under under 6 hours should be a decent run considering the uphill nature of the course and considering it was likely to have some technical terrain. There was also a 26km run starting at the same time but turning off at a checkpoint about 15km in so made a mental note not to go that way! The weather on the morning was very low cloud and foggy, although I didn't notice it raining the ground was wet which I know doesn't bode well for the Brooks trail shoes I had with me.

From the start there was a group moving around 6 min miles through the town as we had a few kms before the first climb on a 4x4 type track. I sat just behind and just ticked along nicely as we started to spread out there was at least 10 ahead of me maybe 15. The funny thing about races with multiple distances is you can never be sure who's in what race... Sometimes the shorter races attract less experienced runners and all the 'competitive' ones choose the longer distance so they actually end up going faster than those on the short distance or.... Other times you get the fast ones doing the short distance and moving far quicker than those on the Ultra.... And sometimes it's just a complete mix!!!! Thinking about positions therefore fairly pointless! 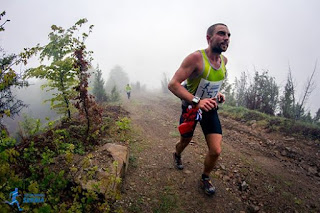 The first climb was just about gradual enough to run and moving through the mist passing the first checkpoint I got my card stamped (prove you've visited the checkpoint) and passed two runners. Visibility was low and although the marking was great you couldn't see very far ahead. I could hear some footsteps behind on a couple of occasions over the next few kms as I was just doing my best to stay on my feet over some of the muddier sections.

Reaching the 2nd CP a volunteer pointed to turn left thinking I was on the 26km but when I said 56 they all told me right which is what the instructions said and also there was a big sign to direct us the correct way. This gave me an impression I must be near the front but still plenty of kms remain. A runner followed me the same way also doing the 56km and I noticed some fresh looking footprints in the mud. 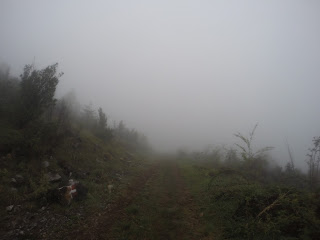 It wasn't long before we hit the long descent, I was going as quick as I could with the slippery ground although it was quite rocky it would be quite straightforward to run in the dry. Suddenly I appeared behind another runner and the one behind me caught up also as we reached the bottom of the gorge together about halfway into the race. It was slippery single track through the gorge and then a good climb up to the next CP. I had to walk a couple of spots up here as it was slippery and quite steep in places but mostly ran. The route flattens out a little and the fog was thick. On one of the long switch backs I noticed there was nobody behind me and just carried on looking out for the up coming CP.
A few minutes later I heard a voice shouting although I had no idea what it was saying and thought nothing of it. The voice continued and after a minute or so I stopped and out of the mist came a guy gasping for breath. Turns out he was from the checkpoint and I'd run past before they were ready and he'd been trying to chase me after they saw the back of me. I had to run back with him to the checkpoint a few minutes away because he didn't have the stamp to mark my card. As we ran back a lady from the checkpoint had the stamp and I turned back around and continued on the route. I'd expected the two previous runners to catch me as it wasn't long since I'd seen them and after spending 3 to 4 mins there sorting out the checkpoint I must have moved much quicker on the ascent out of the gorge. 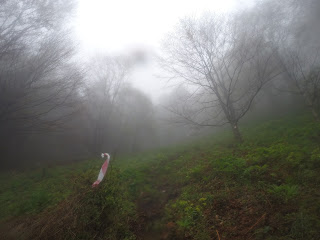 Some more climbing over an 8km section to reach the finish at 41km  but.... We have to do a 15 km loop from here before we really finish! I guessed by now I was most probably leading as the next checking was covered over and i caught the volunteers by surprise, although maybe not... I couldn't tell and kept the intensity up moving as well as I could between the occasional bit of skiing on the mud. I think I'd gone through the marathon distance around 3.40 from memory but I realised I was going to be far quicker than I'd expected unless there was something crazy ahead. I could remember there being a decent climb near the end but hadn't paid that much attention. Then.... The route began to descend... A long way.... This is only really going to mean one thing! I popped out onto a short road section just under 50km and reached the final checkpoint now rejoining the 26km route although they'd all passed through by now. 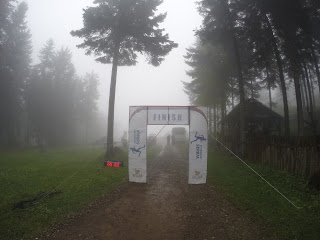 I checked the watch again and remember thinking there's perhaps a sub 5hr on the cards unless either a very steep climb coming up, like a scramble almost, Sure enough we turned off the road and the trail began to climb, quite steep but nothing crazy as we traversed a little across the hill.... Then there was a sharp right turn literally straight up the face of the hillside into the mist. Haha yes the elevation is coming alright! I pulled on trees, grass, dug my fingers into the ground to drag myself up the hill. It was an awesome climb and my body was feeling good for it as I pushed on. It did become more gradual near the top through the forest as I continued to run. I was passing a few runners from the 26km and knew that it must be close to the finish. It was all quite sudden as the mist was still lingering and then I spotted a building and the finish! 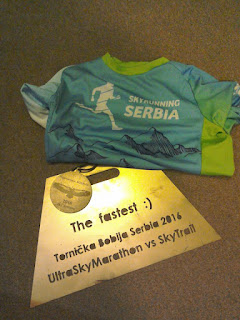 All over in 5hrs 8 minutes. I'd taken over 40 minutes from the previous record and arrived in first. I had a quick shower under a cold hose pipe to get all the mud and grit off before being whisked inside to where there was a hot fire and warm food. I spent the afternoon chatting to some of the runners also finishing and there were a couple of busses to get everyone back down the mountain to the town later on. Although a nice temperature for running I'm sure the views are usually much better usually.
I'd like to say a big thankyou to all the team involved with organising the event, I had a really good experience and was well looked after. Well done to all the runners of course and thanks for making my trip to Serbia a good one! 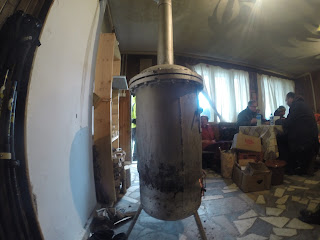 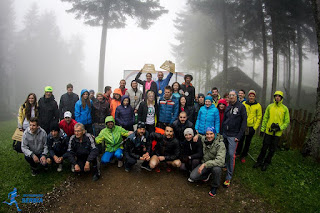 Posted by Charlie Thatruns at 08:17