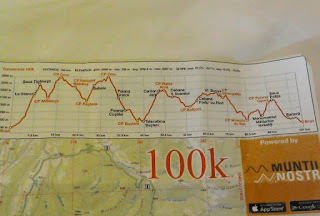 Transylvania 100km (also has 50km and 30km) is known to be a challenging course, with runners facing technical terrain, long ascents and descents, snow on the ground, and altitudes up to 2500m.... along with the local wildlife including bears and wolves (I saw a wild bear a couple of weeks ago and loads of Chamois though didn't hear of anyone seeing anything in the race). The previous 2 editions have had course alterations due to the amount of snow still on the mountains but this year we had the original courses. *some of the photos I took in my recces and have been sent from other people, I didn't have my camera out during the race*

I spent two weeks in Romania leading up to the race and stayed in Busteni which is about half way for the 100km then a couple of days pre race I moved to Bran where the race starts and finishes. I was able to recce out a third of the route and also explore some of the other trails in the area. My first day in Romania I set off up the hill and in a grand total of 11kms I covered 1700m finding lots of snow above 2000m and a lot of the route had chains to help ascend it was that steep. Over the next few days the snow melted dramatically in places although come race day there was still a couple of places with a lot of snow. On the whole it wasn't too bad. 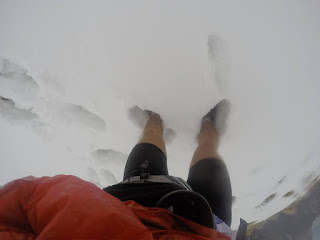 So coming up to race day I had an idea of what to expect having recced what was the highest point of the course and got a feel for the terrain in the area. For comparison there is similar amount of elevation in the Transylvania 100km as the Lakeland 100 mile in the UK - almost 7000m.
Both the 100 km and 50km set out at the same time at 6am in the grounds of Bran castle. Here's a photo I took the day after the race. 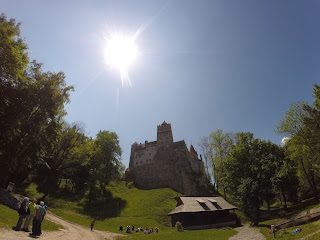 So anyway... the start ... We set out with about 2km heading out of Bran on the road before picking up a track and following the markings up into the woods and beginning to climb gaining around 1400m in the first 10km. 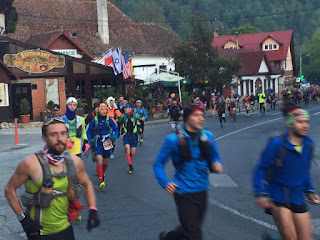 After people had settled down a bit from the initial sprint through town I dropped into about 10-12th position though we were basically in a big pack, going into the woods and a group of about 8 missed a turning off the main track so I shouted them and we all piled up through the trees. 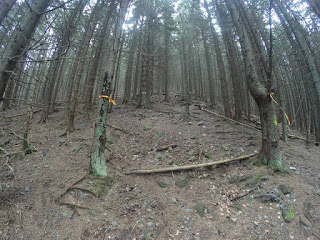 I eased past a couple of runners heading up the climb and it didn't seem long before we came out on to the ridge and got a real view of the mountains just as the sun was shining over the mountains too. The route traverses around a peak before descending 450m and to CP 1 at Cabana Malaiesti 13km in 2 hours 1 minute. One runner just ahead and 4 more in the distance. As we began to move across some snow I was looking up in to the end of the valley wondering where we might ascend.... You can see the trail of runners heading up the gully in the photo below (Thanks Steve!) This section has a fixed rope and basically you just had to kick steps into the snow as you dragged your body up to the top and onto the ridge to reach the high point and CP 2 Omu Peak at 2507m having climbed another 800m. Now 3 hours in there were 2 runners from the 50km and 2 runners from the 100km ahead of me. I'd expected to reach Busteni just under half way in 7-8 hours and so I was roughly on track. 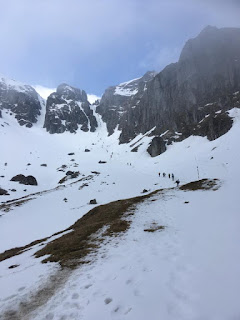 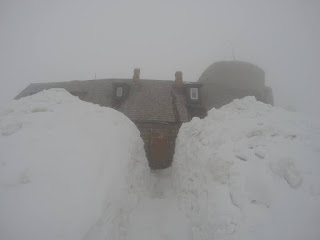 As you can probably guess there's not a lot of flat on this route and being at the highest point it was now time to descend once more to reach the 3rd CP at Pestera 1600m. I couldn't see anyone ahead or behind but to be honest I was pretty focused on descending smoothly as possible through the rocky trail and occasional snow patches. The markings were a little unclear here and I saw some in the distance and headed towards them checking the gps. I then saw the checkpoint hard to the right and checked in before the next climb up to Cabana Babele and the Sphinx! 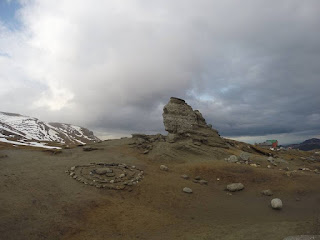 It's a good honest climb initially then becomes a bit more gradual but fairly well covered in snow as I approached the 30km point the sun was strong and despite hiking through snow it was incredibly warm as I headed back to Omu for the 2nd time. Still no sign of any runners around until I saw a few people who had just began descending from their first visit to the Omu cp. When I recced this section the descent was deep in snow and running was a bit of a joke. I caught a glimpse of the runner ahead and pulled a 3 or 4 minute gap on him quite quickly. As I got close I saw him disappear deep into the snow well over his waist. I offered a hand but it took a bit of digging before he was out and we set off downhill, just a few minutes and we were off the snow and onto real trail. The terrain is awesome and I loved the descent into Busteni. I was just outside the town and couldn't see any markings at all after the previous section had been really well marked so became unsure of the route, I knew on the gps it was telling me to go right so I attempted to call the phone numbers printed on the race number for help. I can't speak more than a few words in Romanian and the lady on the other end of the phone couldn't help me so I called a Romanian friend who was helping at the cp in Busteni. Literally a minute later I got to the cp. A quick top up of drinks and I was off out the cp now in 2nd position heading up the ski slope. A couple of minutes and the markings disappeared once again so I was running through the woods trying to follow the gps again before I came across some more marking which was different to the gps. I took the markings and all was well! Just a 1100m climb up to the next cp. 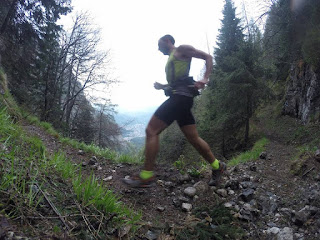 The watch just ticked over to 50km in 7hr 59 and I knew I was on track to finish either just before or just after dark. I'd expected to be done whilst it was still daylight and packed a tiny head torch as even on a bad run I'd only have a bit to do in the dark. Aside from the final 5km the rest of the second half was all new to me, I hadn't recced any. The next few miles were quite straight forwards although I felt like I was moving slowly I was rolling along comfortable and just keeping focused on staying with the markers. The clouds started to roll in overhead and brought with them a shower of rain which would last about an hour I guess. It was at its worse as I hit the 75km checkpoint on a ridge and I stood under the tent for a few minutes and for some reason really felt like eating, so I took a few checkpoint snacks and then headed on before I had time to cool down.

It was largely downhill to the next checkpoint and quite straight forwards except again the course marking was different to the gps file. I followed the marking and after a couple of km reached the small town and checkpoint at 85km. There's still over 1000m of climb left and I was beginning to wonder if the course would be 100km long or if there would be any bonus miles on the end. I'd not paid much attention to the final climbs and looking back probably would have taken a bit more fuel on to keep my energy levels up. I felt like I was barely moving on the final climbs though in reality I was making some decent progress. There were some flashing lights in places along with reflective markers to follow and navigation was pretty easy going.  I passed a couple of guys who were doing the 50km and I chatted to them briefly whilst I got my torch out and darkness fell. I might as well have taken a candle to be honest.

The final 10kms were pretty muddy descending through the woods after the rain and also the 50km runners coming through earlier, I slid over a few times in my racing slick shoes but it wasn't long before I was coming out of the woods and onto a track which I'd run to a few days earlier. I knew it was only 5km from here (now at 101km on my watch already) just then I saw something to my left in the trees. It was two animals that looked very much like wolves and a couple of other sets of eyes reflecting in the trees as they turned and disappeared. I didn't have a great torch or a camera... though I definitely wasn't hallucinating I don't think they were dogs as most of the dogs seem to start barking when you see them... Either way they weren't interested and now I knew the remainder of the route back to the town I cracked on and pushed on the final kms before dropping out on the main road in town. I didn't see any more markings and wasn't sure exactly how you were meant to finish the route so I just stayed on the pavement and around to the front of the castle where we started and up to the finish line! (turns out this was right) in a whopping 16 hours 20 something minutes. Still, to my surprise in 2nd position though I never saw the leader. I thought 3rd might have caught back up though I wasn't moving as slowly as I thought at the time. 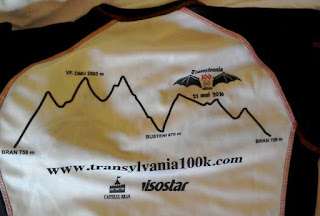 Altogether the route is incredible, it would be ideal if there was less or no snow on the route as there wasn't a lot of running going on in that but it makes for a great adventure. I did have a few issues with the course marking, not up to the same standard as other races I've been doing in the past few months and to be honest without the gps I would have really struggled at a couple of points. The checkpoints were really good with plenty to eat and drink and all the pre race info and registration was flawless! Definitely a challenging event if that's what you're into! The area is fantastic and I'd be well up for coming back to explore some more! I've had a really great time in Romania and everyone I've met has been incredibly helpful! It was a very popular race with fellow Brits too this year so it was great to catch up with everyone who I've not seen for a while including the guys from Team OA events and Mr Ultra magazine himself! Dracula even came out to present us with prizes! 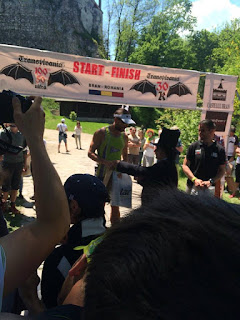 I'm heading back to the UK this week briefly before going out to France to set up for the next coaching holiday in Morzine on the 12th June. My next big race is the Andorra Ultra Trail 170km in July though I'll be keeping busy with a few other events before that! The main goal with that one is to get around in less than 40 hours which sounds slow but is the hardest 100 miler I've heard of in Europe. 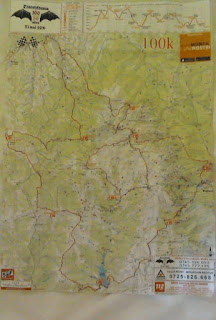 Posted by Charlie Thatruns at 14:30