Sunrise to Sunset is a time based race organised by Denzil Martin near Telford. Based around a 0.84mile loop, gently undulating on a very quiet country lane, partly surfaced. The aim being to run as far as you can or want in during the hours of daylight, officially that was between 0820 and 1601 this year. There was a marker for people completing 'just' the marathon (as if that wasn't enough) to run over after their 31st lap.
Previous winner and course record holder (43miles) Robbie Britton (also winner of the NDW100 2011) had been setting the pace on somewhat wintry conditions in the past 2 years and was back again despite not being 100% to chuck out a good 36.12miles and call it a day. About 30 runners took part, most choosing to complete marathon distance, including 1 dog (Meg), about 9 of us continued to 'ultra' distance. 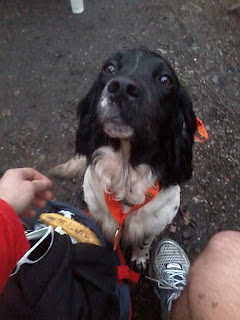 Although not being the biggest fan of laps, i had entered primarily as a social training run at a nice comfortable pace, it was great chatting to so many different runners and friendly faces as i passed. Great amounts of motivation on display to get out and start earning (or rather burning) our xmas dinners off. There was a great social atmosphere around the start/finish base with a roaring fire and table full of nibbles! I passed the marathon mark in a steady 3.17 and continued on most of the day at a comfortable pace. I opened up quite a gap and found time for a mid race picnic and gave the checkpoint something to worry about as i munched away on a couple of 9bars and a milk shake! At this point about 5 runners were still going around. They all passed the checkpoint once or twice, i finished my food and headed back around for another 10k finally calling it a day at 80km about 15km clear of 2nd.

After that came the best post race food i have ever had! Homecooked jacket potato with a delicious bolonase sauce which i managed 3 helpings of and even bagged a portion 'for the road' Massive well done to Denzil on such successful food and a great event which i beleive was his 49th marathon also! Definately a great event to do if your looking for a chilled out day with lots of great people next xmas! Equally if your looking to make a push up to ultra distance in the relative safety of a lapped course with zero navigation, get it onto your calendar.

Denzils website has a few pics and results http://www.codrc.co.uk/COD_RC/Sunrise_to_Sunset.html
and will display information for future events!


Something to think about...
“Never be afraid to try something new. Remember that a lone amateur built the Ark. A large group of professionals built the Titanic.”

Over and out!
Posted by Charlie Thatruns at 18:24