The first 2 races in Rory and Jens ULTRArace series of 2012 had around 60 finishers on day one and half of that on day 2. Some of us running both days others (sensible ones? running 'just' one of the days) The course for day 2 was day 1 in reverse with a minor detour around a fishing match (perhaps to avoid annoying fisherman whose poles block the tow path when they are manouvering huge fish from the water? Also much easier for us to run around them, rather than turn it into the ur45 hurdles)

Day 1 45miles from Northampton to Tring.
I slithered out of bed at 4am, squashed the carefully arranged, pile of running gear from the floor into a backpack, blended up a smoothie and hit the road. It was around 2 hours drive to Northampton for an 8am start (seeing as im from WARRINGTON not Wakefield -RORY).
Journey there... all ok, arrived and had a jog down the first km of the course to where we join the canal that pretty much takes us all the way to the finish with a few bridge crossings here and there to stay on the right towpath! Jogged back up had a quick banana, caught up with a few runners and observed the ever entertaining race briefing before we lined up on the start.

For a change I tried my very best not to look at the time or speed on my Garmin and instead run to how I felt. From the start and the first km down to the canal I had moved into the lead. On the whole it was easy to follow the course with occasional markers although I got the map out quite frequently on bridge crossings to decide which side I should be on (never managed to get 'lost' but with hindsight checking the bridge numbers beforehand would have been a significant benefit, worth bearing in mind if you are signing up!)

There was a little rain the day before but I opted for road shoes and on the whole they were fine although I did find myself scrambling a little on some of the small 'muddy' sections. I passed the first CP around 13.6km in 1hour and couldn't hear anybody behind me for quite some time. There was quite a stretch to the next CP I just carried on running at what felt like a good pace bearing in mind I would be running back tomorrow! Shortly after CP3 I was dying to look at my watch to see what kind of time pace I had been going as I was becoming quite thirsty and having forgot my Nuun electrolytes (they were in my overnight bag just had none with me) I was a bit concerned. I gave in and looked at the watch I had done 3hours 57mins and 52km... Quicker than it felt I was going! I slowed down a little to the next CP until I could get some more water. I was passed steadily by day 1 winner Ed O'Reilly just before the CP. I had a good drink and filled my bottle and pressed on.

From there more canal as we neared TringBefore the end I was passed by another runner doing only the day 1 who finished about 3mins ahead at the Pendley Manor Hotel in Tring where we had a delicious bit of soup waiting for us along with our bags! I finished day 1 with 76km in 6hours 6mins  (47miles).

Jay Macdonald, a friend running day 1 finished almost an hour quicker than last time!! He was kind enough to be housing me and ferrying me around for the weekend along with Rachel his girlfriend who has been brilliant manning many of the previous UR check points and putting up with grumpy, tired runners who moan about the left over flavours of Jelly Babies or the distance of the CP being 100m further than expected. After the race and a few soups, bottles of water and more water, we headed home via the pub (an exciting pint of water for me), for more water, and a big pizza!

DAY 2!
I woke up a couple of times in the night for a drink being really thirsty and when the alarm went at half 6 I got out of bed. It felt like my legs were still in bed, so I woke them up again and got ready for another day along the canal! Guzzled down some more water and the surviving pieces of pizza before doing some mobility exercises and left for Tring and day 2. The pre race brief seemed empty a few less runners than yesterday!

Although the legs felt a bit stiff they loosened up well after the first few minutes as we joined the canal. Likely the case for most of the 'double' runners, with one or 2 new and fresh looking runners joining us again for 'just' one day. Day 2 had a slight bit more wind in our faces it seemed although the ground was a little drier. A lot of the tow path is surfaced so road shoes are great, there is a chunk on grassy paths which after rain may be worth opting for trail shoes.

Today I was trying to get more water inside as I still felt slightly dehydrated and adopted a slower pace than I had planned. The legs were never going to do a fast sprint today but were comfortable ticking along at a steady pace. To save time and keep drinking I planned to drink as I crossed a bridge, taking my time so as not to end up running the wrong side of the canal! Everything passed a bit slower than day 1, I got a few photographs of some amusing boat names including 'A waste of time' and 'Home' and an artistic bit of painting somewhere not far from Milton Keynes.

If you have a phobia of water, ducks, dogs, canals, fisherman (anglers?), boats, towpaths or bridges this may not be your ideal race. Time seemed to tick along slowly, I stopped to do a few mobility exercises for my hips which worked great, just then I reached the 2nd last CP for the day, leaving quite a slog around 19km to the last CP, I took an extra bottle of water, filled my bottle, a handful of JBs and a coke. I found it easier to keep running at a steady pace than to take any walk breaks. Just as I started to wonder about the last CP I noticed the water turning green indicating I was close to the Blisworth tunnel (aparently somebody last year attempted to shimmy along a brick width ledge inside the 2km tunnel last year!) 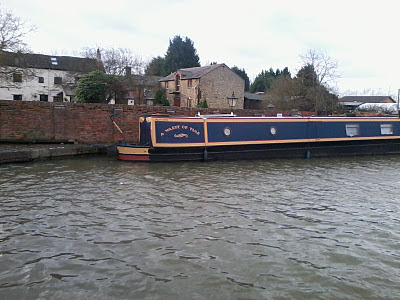 From here up a gentle climb to the CP  before a short road section then back to the canal for the final 10k back to Northampton! The finish was up a gentle slope and around the side of the Park hotel where a slightly chilled Rory and Jen were waiting along with a good friend Vale who had some delicious sandwiches ready for me!

The old legs were a wee bit stiff after the drive home and didn't feel much better the next morning. Probably the most ache I have had from any running actually. Luckily Monday morning at work only involved a kettlebell session and some lunges after a quick go on the foam roller and power plate!

day 2 75.11km about 46miles in 7hours 55mins, much slower than day 1, though if I hadn't chilled out and got enough water down me, it could have been a whole lot longer! a 3rd and an 8th place. Not sure about the total times out of those who ran both days, will update when I know!


official results below. I have some photos too!