The Grand Tour of Skiddaw... In their words... '44 miles of fast trail taking in a climb up the might Skiddaw at the halfway point' ... Pretty accurate I reckon. Not sure how many people would call the ascent of Skiddaw fast, give or take a few seconds it took me about 45 mins, but on the whole it was a mix of good firm trail and a couple of grassy fields, with an odd mile or two of country lane. 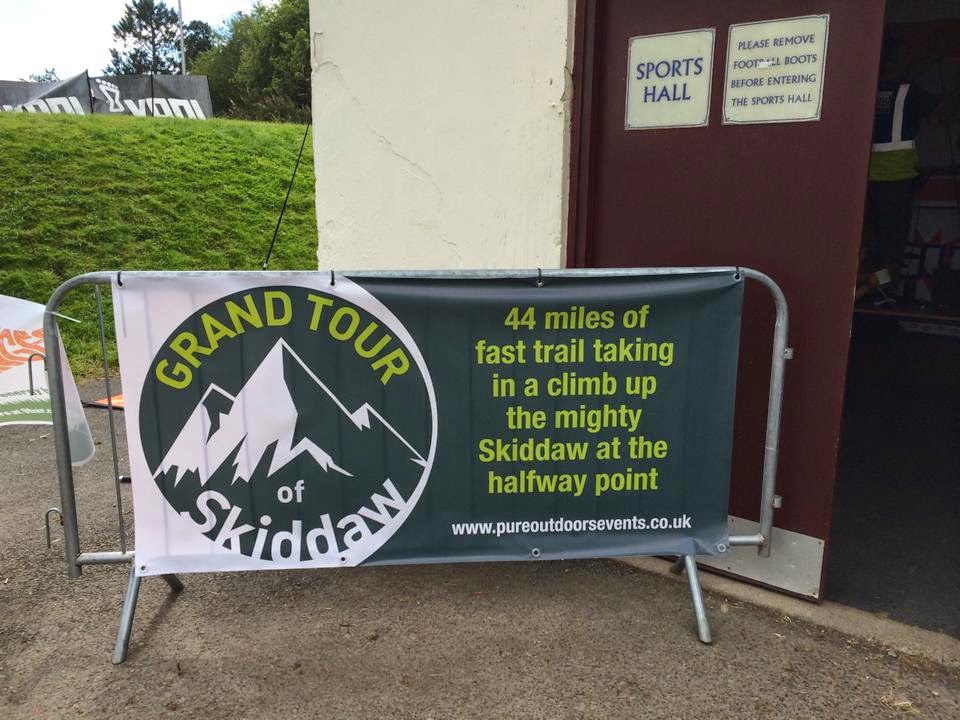 The route is basically a lolly pop shape starting nearish to Carlisle at the Hq, which was a sports hall with showers etc and large field for camping, some catering guys there to prevent an angry mob of hungry runners and Tony H was out in force ready for any last minute gear purchases. First 7 or so miles to the first checkpoint are following fields and rivers to Caldbeck, then off up High Pike which is a gradual grassy climb followed by a long fairly easy going trail following the Cumbria Way to Skiddaw Bunk House and along to the car park at Latrigg near Keswick.
A good 4-5km uphill to Skiddaw at, I believe 931m, descend towards Bassenthwaite down the Longside Edge to reach the 3rd cp at Peter House Farm before an undulating couple of miles along the Cumbria Way in places to reach the road down to Caldbeck before retracting steps to reach the first cp (now cp 4) and the final 7ish miles back to base and a finish line! 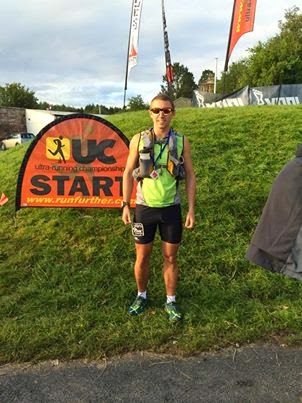 A cool start which soon warmed up nicely as we set off at 8. I was even at the start line on time! I had a pretty relaxed morning waking up about 7ish and wolfing down a couple of breakfast 9bars and some water and that was pretty much it, ready to go (kit check and registration I did Fri evening) The event had a very relaxed feel about it which was nice and the crew all over the course were fantastic! 10/10 for the crew and organisation! Nice one guys! 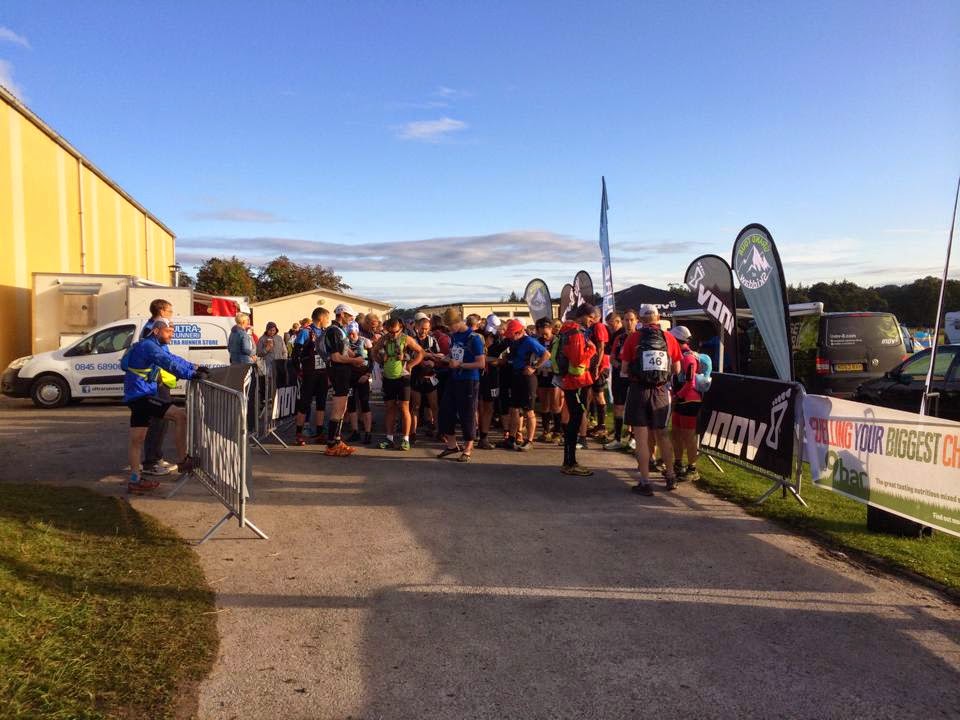 Seeing as I had done no recceing at all (except the first and last 3ish km - I entered last minute) I only knew about 5 miles of the course, but figured there'd be a group of runners on the first leg (which was also the last leg) so should be fine along with the really good map and directions we received. I took the gpx file on the handheld Garmin for a back up and used it quite a lot to keep on track without worry.

We set out at a pretty slow pace of about 7 runners near the front which soon became 3 despite nobody making a particular break it seemed. The trail wound along the river and fields although there were a few opportunities to get confused it was pretty straight forwards. I kept an eye on the gps and let the other 2 runners, Ian and Nick run ahead whilst I took some photos and enjoyed the sunshine. We rolled up at cp 1 and for some reason mine and Nicks cards didn't scan. I grabbed a bit of water and jogged on. It's a gradual uphill on the next section which had been marked out for us to an intermediate marshal taking numbers, I followed Ian and Nick up the climb, Nick had a fast walking speed and was local to the area.

The descent on the other side was a little bit thin on the ground and covered in ferns I took my time down and was surprised at how much gap had opened up I was sat about 3 - 5 mins behind the pair I guess over the next section that rolled along a good trail to Skiddaw Bunk House. I was happy at the pace we were running and just carried on at what felt pretty easy. (despite running easier than I normally would over the first half as a bit of an experiment I didn't actually feel any more energetic in the 2nd than normal - interesting) 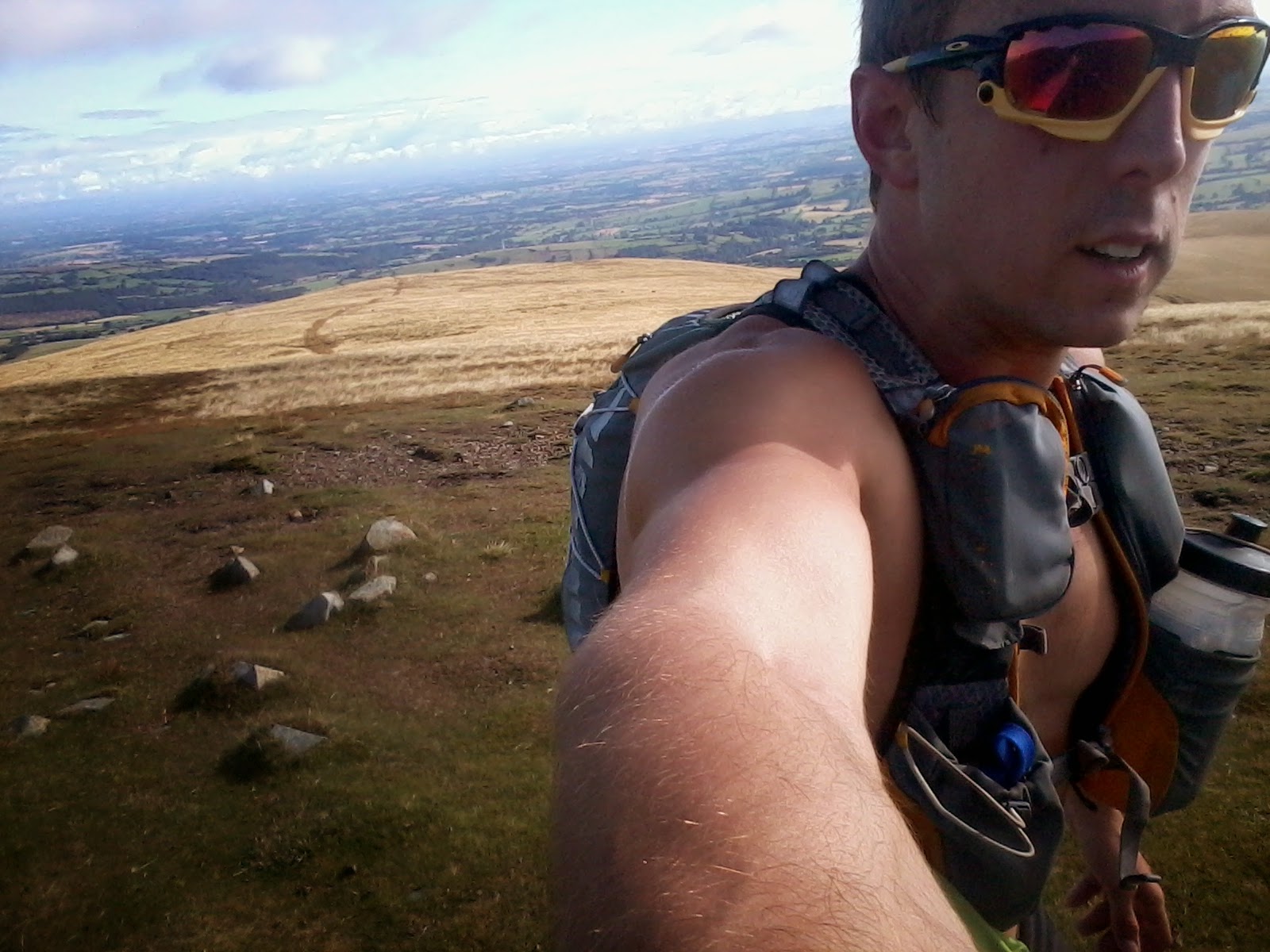 After the bunk house there is a short run to Latrigg car park below Skiddaw where the 2nd cp was. I stopped to splash some cold water on myself in a stream and turned to start running again and I heard a voice shout from in the fearns! It was only David from Sports Sunday and his huge camera! Got caught with an arse shot good style! I said a quick hello and was on my way down to some smiley crew to chat to briefly before I grabbed a bit more water and heading back up Skiddaw. The front 2 runners had about 5 mins on me as I passed them, Nick looked most strong at the time, so I set out to catch them up.


It wasn't long before I'd caught the pair and stuck with them for a couple of mins before jogging on up to the summit, as far as I can remember the first time I had actually been able to see whilst on the summit which was pretty cool! A quick hello to Joe and I even snapped a photo of him before the short backtrack to pick up the loose rocky slope to the ridge. A fantastic route down which I enjoyed and before I knew it Ian had pulled back up along side and there was no sign of Nick as we jogged into the 3rd cp. I had a quick slurp of coke and then topped up the water.

The next section had a few fields to weave through before a mile or so on the road. Running together with Ian I noticed his footsteps were getting heavier as I nudged the pace up a little. He dropped back slightly and apologised for putting the headphones on and battling on. We left the road and skirted around the fell towards the final cp for a few miles and Ian seemed to be pushing quite hard and stayed probably a minute ahead. I stopped at a couple of streams to tip water on myself and slid down a couple of gels in a bit of an experiment to see if I actually felt any more energetic than usual. I was thinking about the remainder of the course and decided that it'd be a bit silly to finish 2nd when I was feeling pretty strong still. I planned to put a fast descent in on the mile or so road downhill into the cp to close the gap up and so I would leave the cp with him, turned the corner and immediately saw Ian walking down the road, I guessed he must have been having a tough time and I slowed to check he wasn't injured before running on enjoying the downhill into the cp. I topped the bottle up one last time and set off back out the cp before Ian arrived. He had been going well all day it seemed so I didn't want to risk having him too close and making a silly error in the final 10km that could cost a win. I was running well still and just concentrated on the route. On the way out this morning I had turned back at major junctions so I knew what I was looking for on the return so had no troubles polishing off the final few miles. I had an interesting moment were I was swooped at by a buzzard running across an open field with nothing to really hide behind before hitting what I knew was the final 3 km from running it on the Friday night... steady to the end to break the course record and finish in 7.09 9 or 10 minutes ahead of Ian who finished well and Nick about 40 minutes later who, with no pressure from 4th had enjoyed the run in I think.


After that it was time to lay in the sun for a while, eat soup and do some clapping before I got a shower and did some more laying in the sun and eating soup. There were finishers coming in up until nearly 4am (just under 20 hours I think) which must have been a tough day so well done to those guys especially! It was great to catch up with lots of friends and meet some new ones too as always!


The prize presentation was the following day at noon so a relaxed evening and morning went down well before that. I even got my photo taken with some famous running chap called Billy! What a guy!

All in all a great event with great support, the route is varied without being too difficult terrain wise. The relaxed weekend away with a bit of running certainly worked well. A few more mountains in the route would liven it up a bit although I'm sure there are enough people who think that was plenty ;)
I believe the next event being held is The Cumbria Way Ultra in September at 73 miles. I haven't really a spare weekend but if it's something you fancy jump on their website to find out more 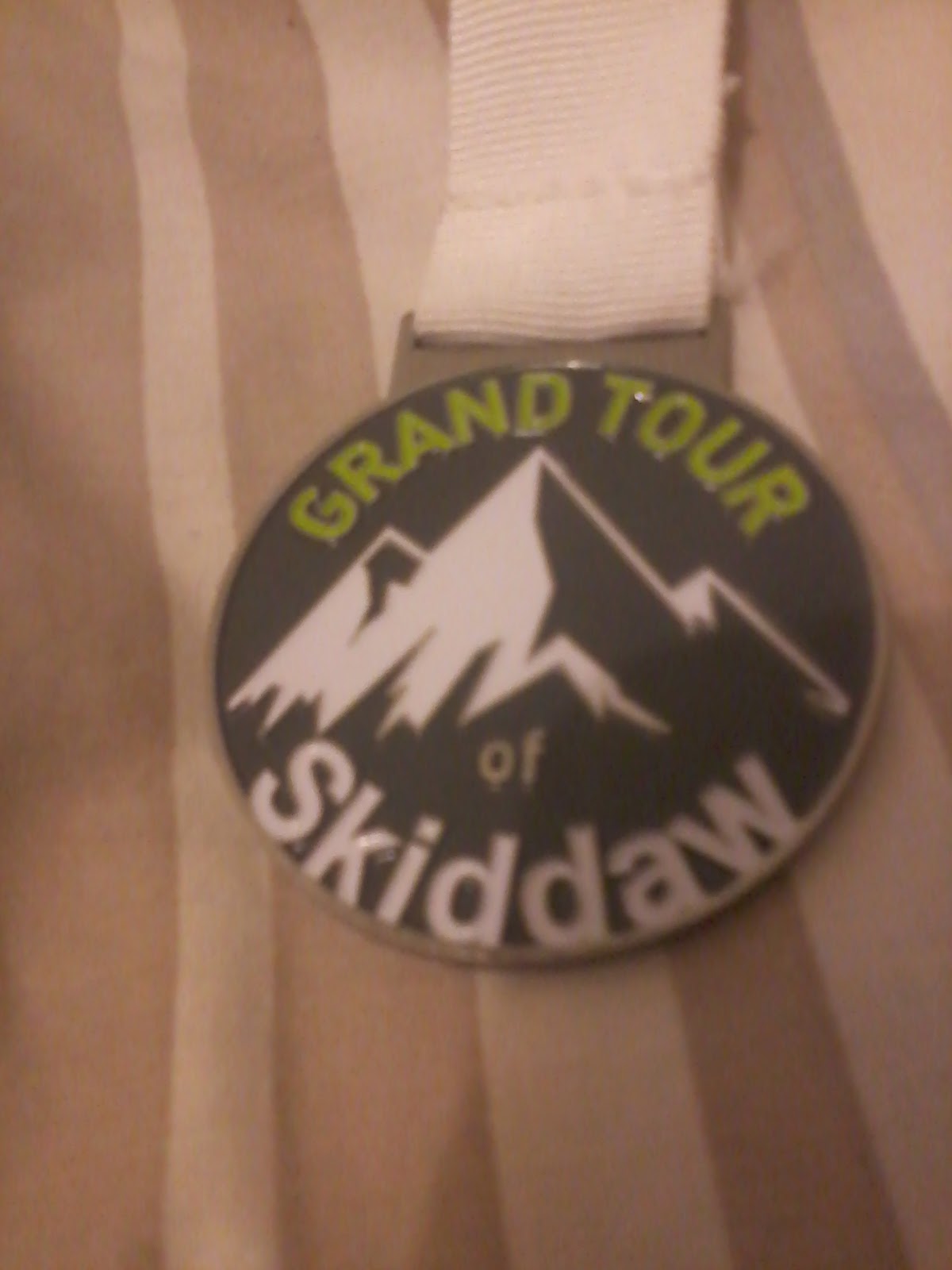 Nice finisher medal, a t shirt and a pair of Inov8 shoes for winning! That'll do! Off to Switzerland for a run this week!
Posted by Charlie Thatruns at 20:11