This years Lakeland 100 was fantastic! Same great organisation, checkpoint support was awesome once again with various teams taking over checkpoints (such as running clubs, shops, pink fairies) to look after around 300 starters in the 100 mile and 600 in the 50 mile race. I had a perfect weekend, catching up with friends from all over the country who had descended into Coniston on Friday ready for the briefing and 6pm start.Oh.. and the weather was perfect (aside from a smidge of rain Saturday evening though I was tucked away in my tent then) some say a little hot though after the AAUT in Spain 2 weeks ago where temps passed 40C this felt nice.

After kit check (it is actually checked) you go through a little funnel of being weighed and collecting race packs etc then I had the afternoon to get some food and catch up with friends before the briefing at 4.30pm
There was a male singer at the start line to add to the atmosphere and the first 500m or so through Coniston was lined with people, I set off steadily to the side and apart from ducking and dodging all the Ipads people were filming on all was well. 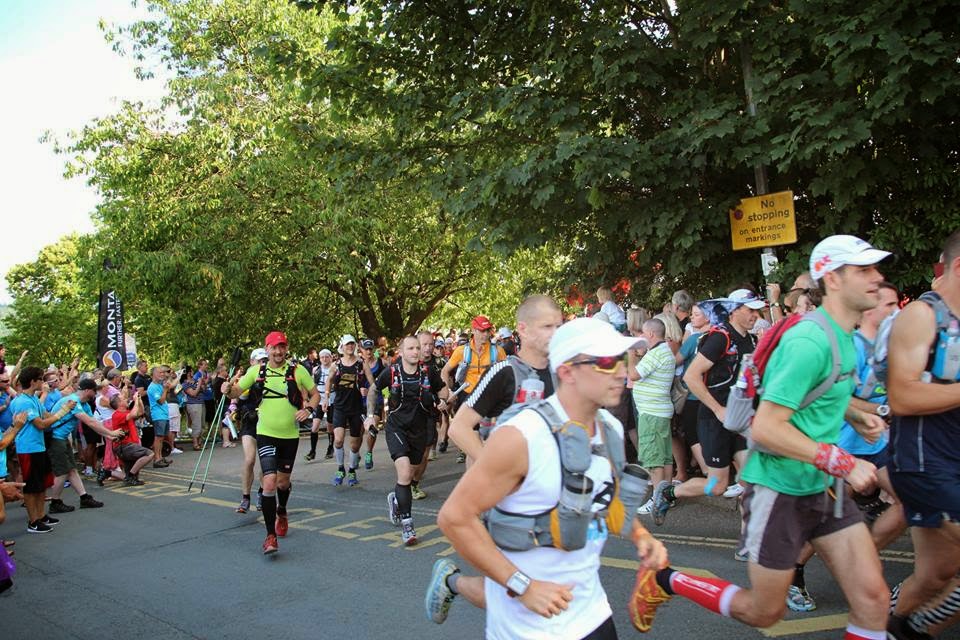 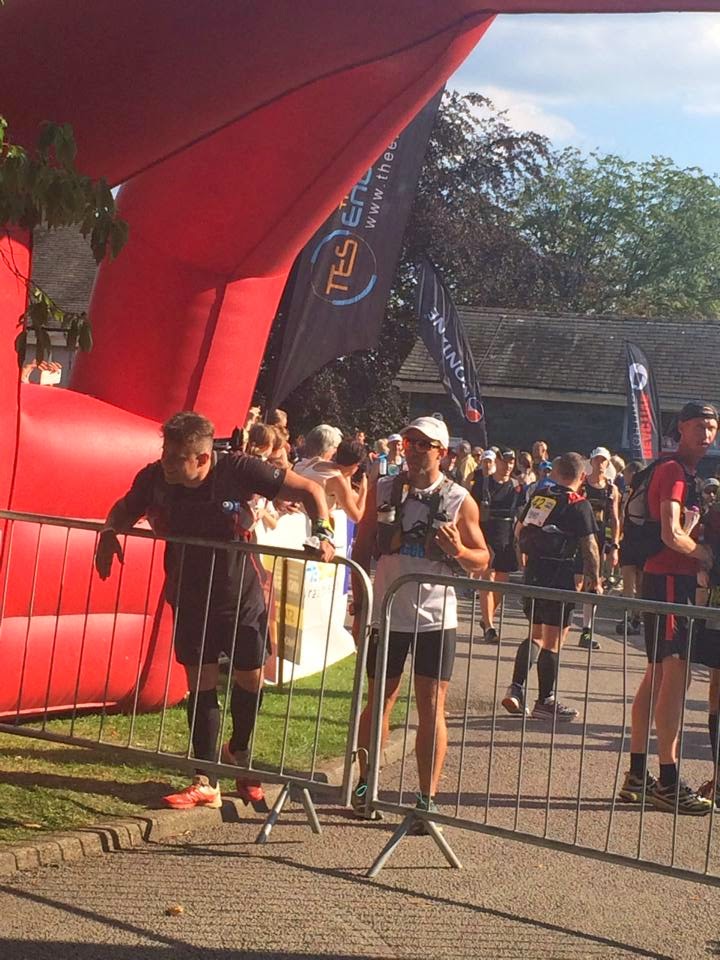 There wasn't any really fast starts this year apart from Lee who seemed to be pushing quite hard initially, a small group of about 10 of us behind him and as we passed the Coppermines YHA had already started to spread out a little bit, after a couple of km heading up Walna Scar Rd at a gentle pace I found myself in 3rd with Lee and Marco just a few seconds ahead. We ran together chatting a bit for the first few Cps, running towards Wasdale as the sun was setting, not a breath of wind simply perfect running conditions! At the Wasdale Cp Lee had dropped back a little bit and I was first to dib in, a cup of coke and we set off towards Black Sail, I ran up and at the next gate I turned to give it to Marco/ Lee and there was nobody there, I'd just run from the cp chatting but there was nobody there! Felt a bit silly but carried on enjoying the run up and out of the end of the valley on my own. A good descent down to Black Sail YHA and ran on up and over to Buttermere. Darkness just hit on the descent to Buttermere so I whipped the torch out (had packed it in the very top pocket of my pack this time and not in the bottom!) a quick photo shoot on the way down followed by the easy run around the lake to the cp.


A steady run along towards cp 5 at Braithwaite this section weaves around a few little streams and is gradually climbing, I caught a flash of a torch behind in the distance and was still moving well and remembering the route was pretty easy from last year. I was looking forwards to the first bit of food at the cp but when I got there I didn't really feel like the rice pudding so I had a handful of grapes and filled a water bottle with cola (which I did for the majority of cps from now on) from here the route is fairly flat and not very technical, some gentle climbs but nothing like the ones just tackled before Buttermere and after Howtown. The night section went pretty smoothly, just kept running along at a steady pace, sipping away at coke and water, keeping on the course and enjoying the clear starry night.

Just before the 45 ish mile cp at Dockray Marco who was running strong came past and took the lead, I got into the cp and had a few peaches and set out again still just before sunrise. I filled up with some apparently flat coke only for it to explode in a huge jet that reached across the road a few moments later (haha who flattened that?) I managed to follow the next section without any detours, aside from a bit of confusion in a short section with a few cow fields where I couldn't spot the gate and ran around looking for it, all was good, a nice quick few km along the road and into the Dalemain Estate where the halfway point was (about about 55 miles I think 'cos it's actually 105 miles total I believe) I got in and got my drop bag, grabbed a bottle of lucozade out, downed a cup of tea, had a mouthful of custard and filled my bottles up then straight on for Pooley Bridge, quite a fast section which is relatively straight forwards too.

I usually think about what I'm going to do at the cp when I'm approaching eg what do I need to do/ eat or drink etc, for some reason I decided to take both bottles with water and didn't take any cola, I set out from the cp looking forwards to getting on some good climbs again to make a good push on but after a couple of km my eyes were shutting, I stumbled along up the climb and found a Mr Corless taking some action shots. Not sure if it had been the caffeine or the sugar in the cola keeping me going up until now but I was struggling to keep the eyes open.

The top section seemed to drag a little before descending down to Haweswater track pretty well and dipping into a couple of the streams along the way woke me up nicely and I made my way on to the mighty Delamere Spartans cp at Mardale Head where there was plenty of energy! I topped up with coke again and pretty much just headed straight off I think?

The climb up from there seemed longer than I remembered I kept a good pace up and over and I knew the rest of the route from memory a lot better which meant I could relax and just run along enjoying the sunshine and look forwards to a fruit smoothie at Kentmere! There was a lot of energy at Kentmere too, Jenn was racing around sorting out my water bottles and bounding about looking really enthusiastic! I enjoyed the smoothie then set out up Garburn pass which is another great bit of the Lake District. I really enjoyed the section down into Ambleside and was feeling pretty good although perhaps got a bit too relaxed and noticed I hadn't been pushing very hard in the last few miles. I had run the section from here to Coniston with Julie a client who did the 50 though other than that hadn't been on any chunks of the course since I ran in 2013.

There were lots of people out enjoying the weather as I followed the route along the river and could see all people playing in the river, which looked incredibly tempting! I had been tipping water on myself along here quite frequently and before I knew it I had reached the Chapel Style cp when it was getting towards the warmest part of the day. All the water and drinks seemed to be warm and I was just ready for something cold, anything cold, just in time one of the marshals dishing out ice cream for themselves so I had a scoop which was simply fantastic! Sitting out on the sofa in the middle of a field in the Langdale valley, what could be better on a Saturday arvo?

Anyway I got up and ran on towards the FINAL CHECKPOINT!! It was a mixed feeling, I was enjoying the run that much that I didn't want it to end I ran on and worked my way along some of my favourite parts down to the penultimate climb, got to watch a few 4x4s negotiating their way along the rough track as I was ascending slowly... Didn't spot the highland cows today but could see the final cp as I began the short descent through the farm at Tilberthwaite. Last year I didn't hang about at the cp becuase there was only a 10 min or so gap between me and 2nd (which I managed to make up and gain my own gap to take 2nd) I enjoyed a few strawberries and a chat to the crew before I took the final 4ish mile? section up and over into Coniston. No sprint finish needed this time, just a steady run down into the town and into the finish for another 2nd place in 22 hours 40 odd minutes. Aside from getting a bit lazy in the later stages all went well and I had a fantastic weekend!!


There were some fantastic performances all around from the front end right the way to the guys coming in after nearly 40 hours, I think that's even more impressive! I've run for that length of time in longer events a few times and it's tough! Especially heading into a second consecutive night with no sleep!

Post race I went for a dip in the lake and lay on the beach for a bit... the perfect way to cool down, then it was out for dinner which I managed a soup and about 3 mouthfuls of a main before getting a takeaway box!
Sunday morning there were still runners finishing in all kinds of states from sprint finishes to painful shuffles. The prize presentation is definitely worth staying for, with a video of the weekend that had been made and edited already, some funny competitor stories and of course the trophy and prize bit! Some amazing runners out there over the weekend! Same time next year? Who knows!

One last thing... What did I eat?
half a tin of peaches at Dockray, a few strawberries at Tilberthwaite, a few grapes at Braithwaite, a mouthful of custard at Dalemain, fruit smoothie at Kentmere and some ice cream at Chapel Style cp.
along with 2 breakfast 9bars just before the start....
I think... that was about it. I had 400ml of cola at 7 checkpoints and a cup of cola at 3 others. I put Elete electrolyte into my water which I had about 500ml at probably 10 checkpoints and a bit out of streams.... and a tescos own lucozade after Dalemain.
from memory that's about the lot, should have had a cola again at Howtown as shortly after then was when I got a bit sleepy and relaxed the pace a little it felt like although I haven't actually any garmin data to check I was enjoying the run probably a bit too much! 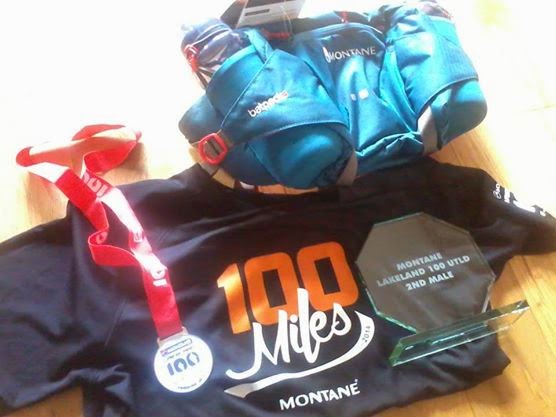 Massive thanks to everyone that helped out, organised, ran, cheered, clapped, took photos and got involved with the event in any way. Also obviously well done to all the runners too! There is a fantastic video floating around of the whole event, try searching it out on youtube it's worth a watch.

Posted by Charlie Thatruns at 12:20