My first Hardmoors event and also first run of 2015 on the 1st Jan. I actually entered the race without looking at the course and assumed it would be pretty hilly and quite a tough course... Couple of days before the event I got the map out and had a look at the route and realised I must have chosen the flattest HM event there is!

Next main race I'm doing is the Trans Gran Canaria in March after the Trail running coaching week I'm holding in Spain. That's 123km with 8500 meters of elevation :) :) :) so recent training has been all about the hills (mountains). Back to the run though, I hadn't done any recce beforehand but was looking forward to a steady long run around somewhere new.

The event was organised really well, efficient kit check and registration on the morning and a short briefing before heading outside and getting going, Weather was a nice temperature, dry overhead aside from a few spots of rain literally, the odd breeze in a few exposed spots but generally the route was sheltered from that. Underfoot the route was about half on rail track paths which were flat and easy running then a few sections of coastal path running along the sea with a few steps on, this was a bit muddy (I wore Mizuno Ascends which aren't that grippy in mud) but generally feet stayed dry.

I started out probably around 25- 30th position, stuck to a comfy 7 min mile pace, along the Cinder track and gradually passed a few enthusiastic starters over the next 5 miles towards Whitby. Had a good chat to a guy who'd done a few HM events before and the miles flew by. we hit the first cp around 10k in about 42 mins and ran through Whitby, passed the Abbey and onto the coast which was a bit more interesting than the rail track with some mud. Reached the Sports Sunday guys Laura and David who snapped some fantastic pics of us all. 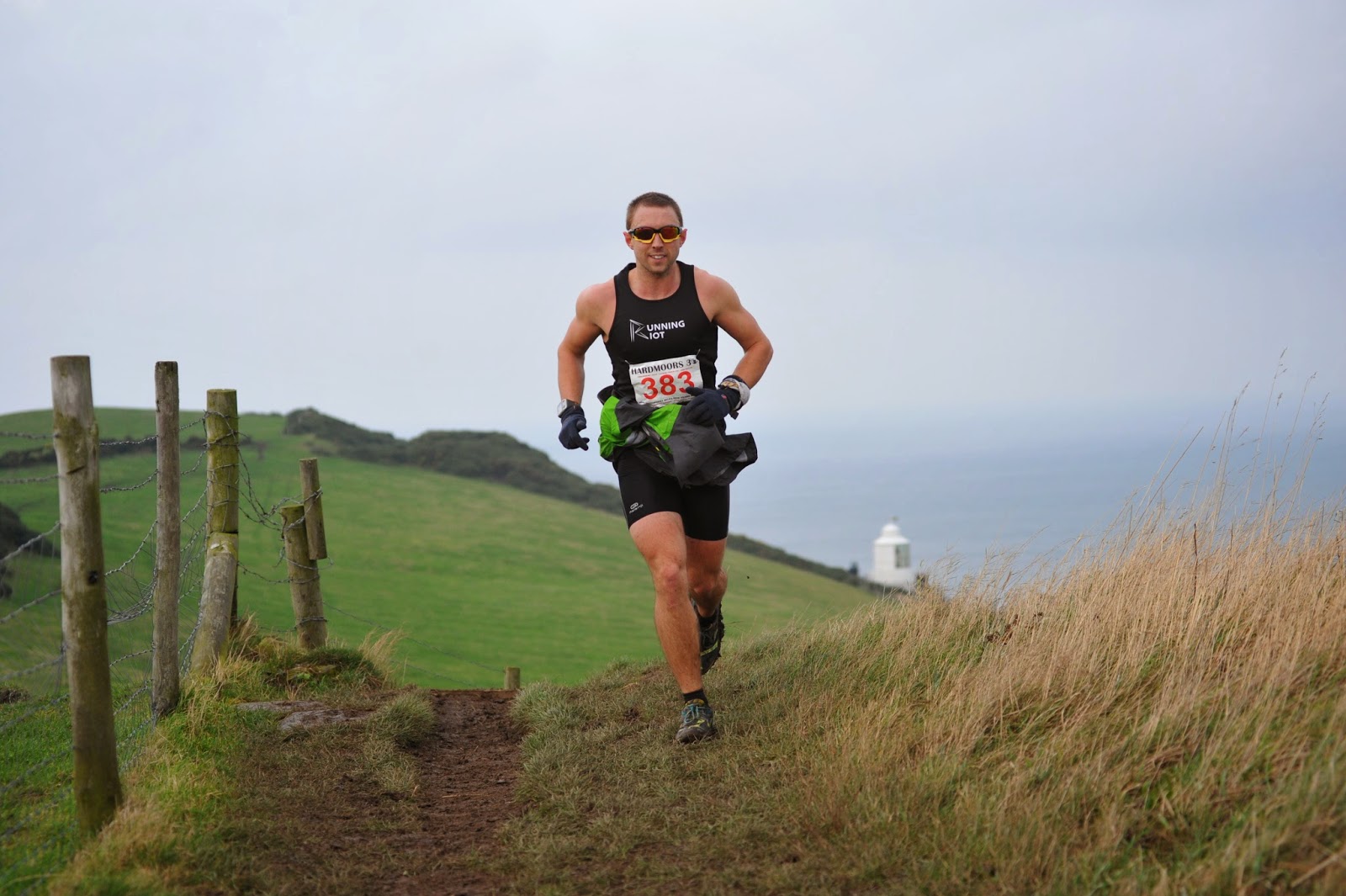 The route carried on back to the start at around 21km and after a bit of mud and a few steps I'd moved up the field to 4/5th. As I was going pretty steady I didn't slow down as much as others on the coast I guess. I'd been concentrating on trying to pick the least slippery lines through the mud too. At the halfway I had a cup of water and set off out along with another runner. We'd continue on in 4th and 5th for the rest of the race not seeing any sight of those in front or behind.

We headed out on more Cinder track and I moved ahead towards Ravenscar. At the end of the track my route was suggesting I go right towards the village hall so off I went. Shortly after a family was walking towards me and asked if I was in the race and the guy said he thought the route had changed so didn't come up that way this time... I didn't know any better than the route I had (I now know that i had last years route, oops, the route was mostly the same but this year started in a different place and so I was effectively heading to last years start finish.) I turned around to head to the previous junction and wait for the chap behind who'd said he knew the way and saw him heading off in the distance the opposite way.

I headed off to follow him and then turning the corner was a checkpoint, I was back on course and was slowly catching him up again following old rail track. I reached the next cp ahead of him without seeing him (think he'd ducked into the gents somewhere and I'd passed) I stopped to tip some gravely bits out of my shoe and he caught me up. We chatted as we set off back along the coastal path (around 10km left to go) this was a bit more interesting as there were a few steps here and there mixed in with the coast path as we weaved along the top of the cliffs on the path. I moved ahead again and all was good until I glanced left and saw another runner wearing a red top and I thought it was my friend behind me and  that I must have gone off route. I stopped and was shouting to ask where he was going but no reply, then a small group behind him were following too, one guy shouted back they were out at 18 miles so I realised they were on the start of the loop and I must be going ok, I waited up for 5th place and he was happy with our route so we continued together to the checkpoint. We ran together a couple of miles on easy trail back to the coast path then again I ended up moving ahead again and eventually finishing a few minutes ahead. It was relatively straightforwards following the coast path but I had no idea where to go at the end, as I reached the town I asked people who were walking around and they pointed me up to the left and with a few other spectators help I was up the hill and jogging across the carpark to the finish in just over 4 hours and a 4th place. Only a few minutes behind 3rd although I never saw anyone in front that I didn't overtake.

If you're looking for a good value race on New Years next year definitely give this one a look. It's pretty fast going depending on the mud. Not very hilly overall for the area, ie no big hills, highest point being about 200m any ascent comes from the short sections of steps along the coast path, nothing more than a couple of minutes up or down at once. If you're looking to go pretty quick then it'd be worth checking you've got the correct route ;) Well done to all the runners who got out there and had a bash, also well done Tony from The Ultra Runner Store coming in 3rd on the 15 miler!