First thing you're going to hear from the majority of people who did the marathon (or the half) is IT WAS LONG MILES AND MILES LONG!!! AND FREEEZING..... 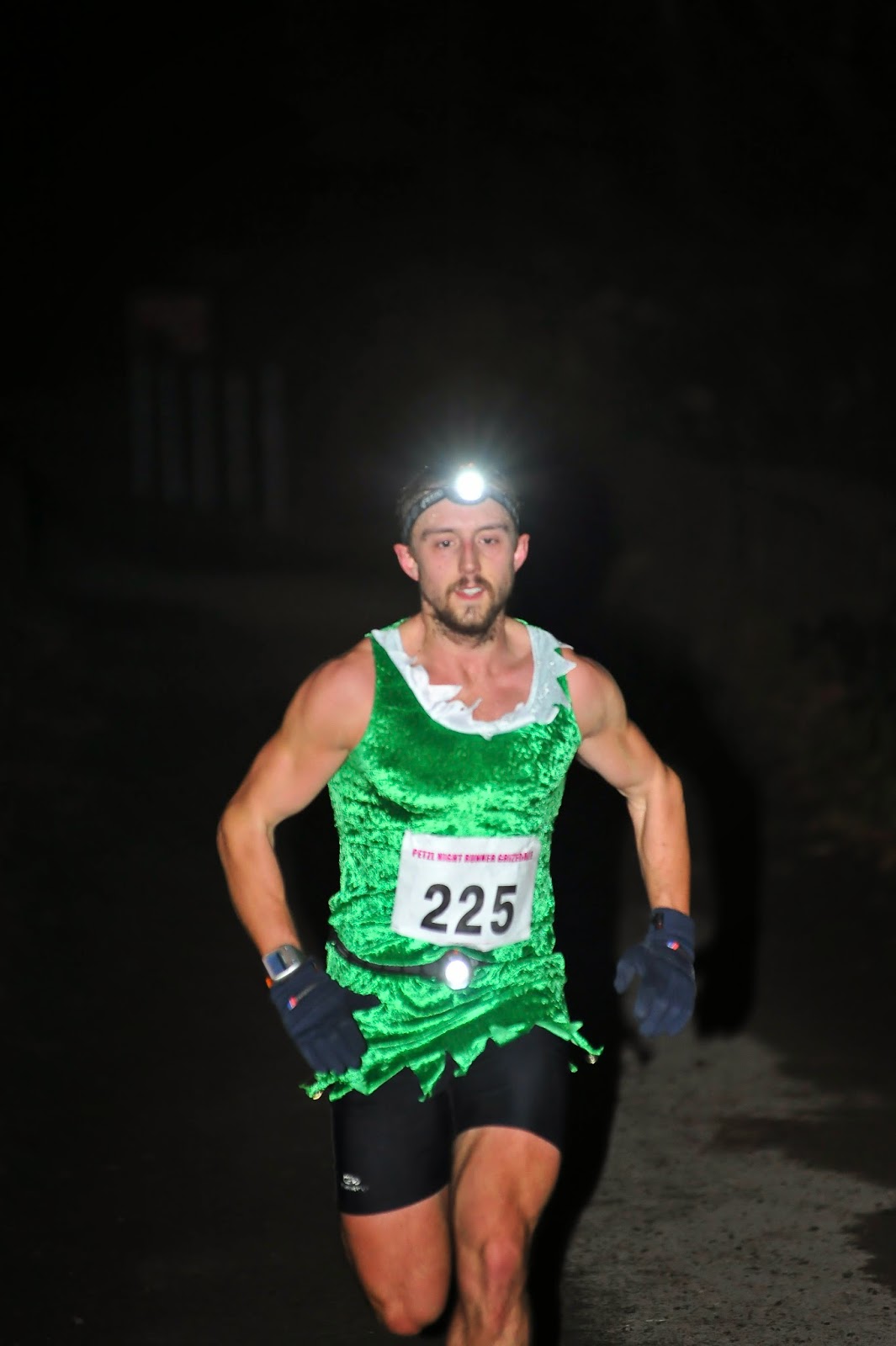 In reality it was a little bit over distance (the first loop was about 14.5 miles which was the half marathon route then the second loop was just over 13 miles making the route about 1.5 miles long.
No big deal it said that on the website beforehand - some bonus miles :)
Temperature wise I was sweating and only had a vest and shorts on.... But the hairs on my arms did actually turn frozen a bit like the crunchy grass when there's a hard frost...  I bet the marshals were a bit cold so big thanks to them for sticking it out but it was as stunning day, no wind and a mix of blue sky and low cloud causing some inversions over the valley. I don't think you could have got a better day?! 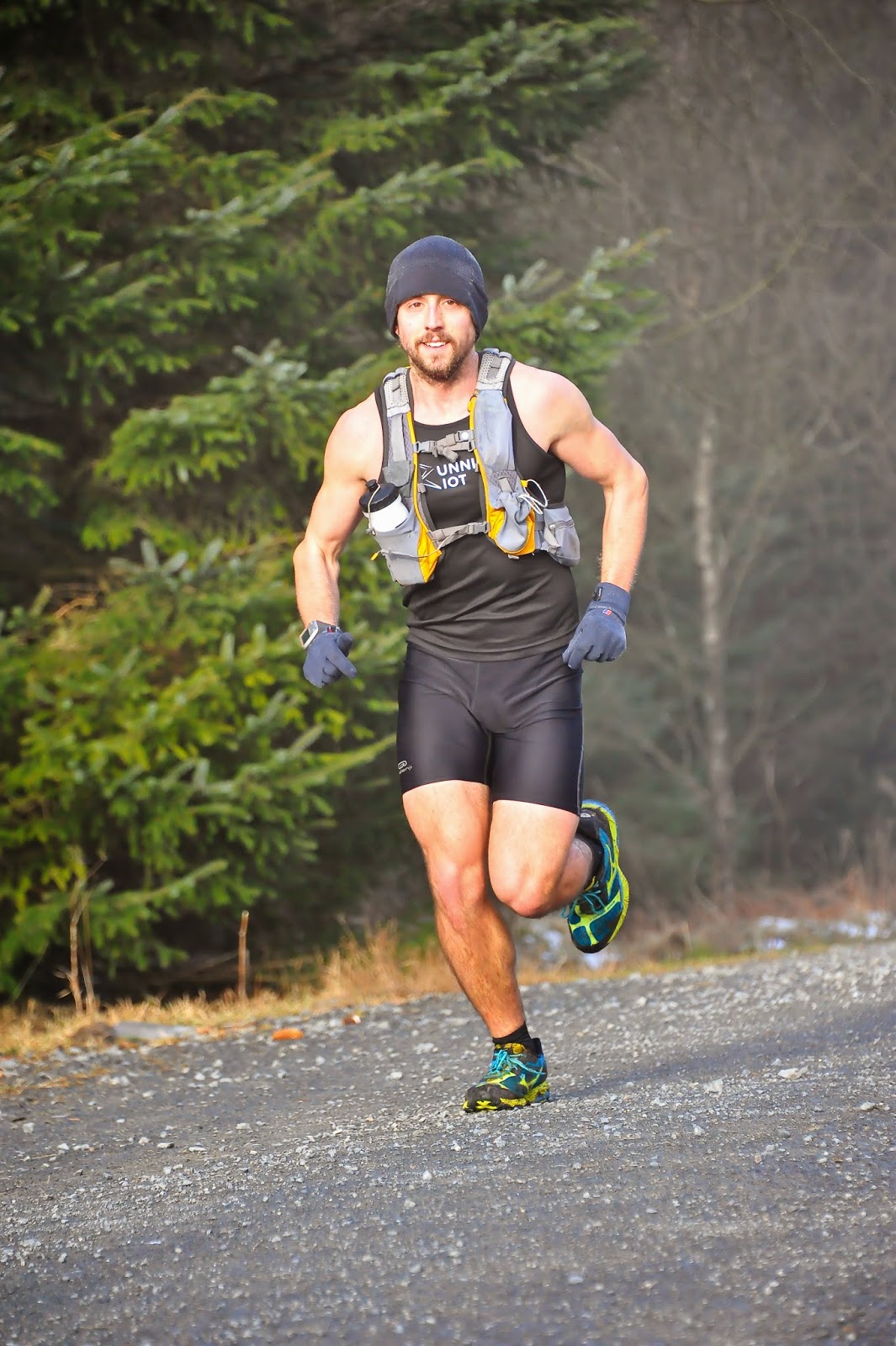 Before the event I had a quick look at the route profile and the course map/ elevation and placed it somewhere slightly harder than Bolton Hilly Marathon but much easier than Scafell Pike Marathon and a fair bit easier than the Excalibur so something pretty similar to the Trail Marathon Wales but about a mile longer. I knew I'd be somewhere between 3.20 and 3.30 based on that and having hit the race at the end of a large block of ascent focused training (averaging around 5000m ascent per week with the biggest being 8000m)

On the day I've simplified my race day routine so I don't need to think about cooking breakfast or preparing anything and just have 3 breakfast 9 bars and about a litre of water. Registration and parking was all easy and quick, it was great to catch up with a lot of friendly faces before a quick warm up (I did 15 mins as usual out and back on the route) before stripping off to running gear and getting into the start pen ready for a quick briefing and the kick off.
From the start I was in the mix with about 5 other runners at the front as we gently climbed the first 5km. The next 10k was pretty much flat on a mix of wide forest tracks and a little bit across some field tracks with the odd burst on single track. I moved up to the leaders and briefly took the lead before being passed again by a guy who looked to be moving pretty well. We passed the checkpoint around 8ish miles I guess then the Sports Sunday guys Laura and David who were snapping away on the cameras before winding through some more trails on a long gradual descent for a couple of miles down to the halfway point (also the start finish area) just before here I turned a corner and suddenly was right back up to the leader who was walking and guzzling down a gel. I stayed with him for a couple of minutes down to the halfway point and cp2 in 1 hour 39 mins. 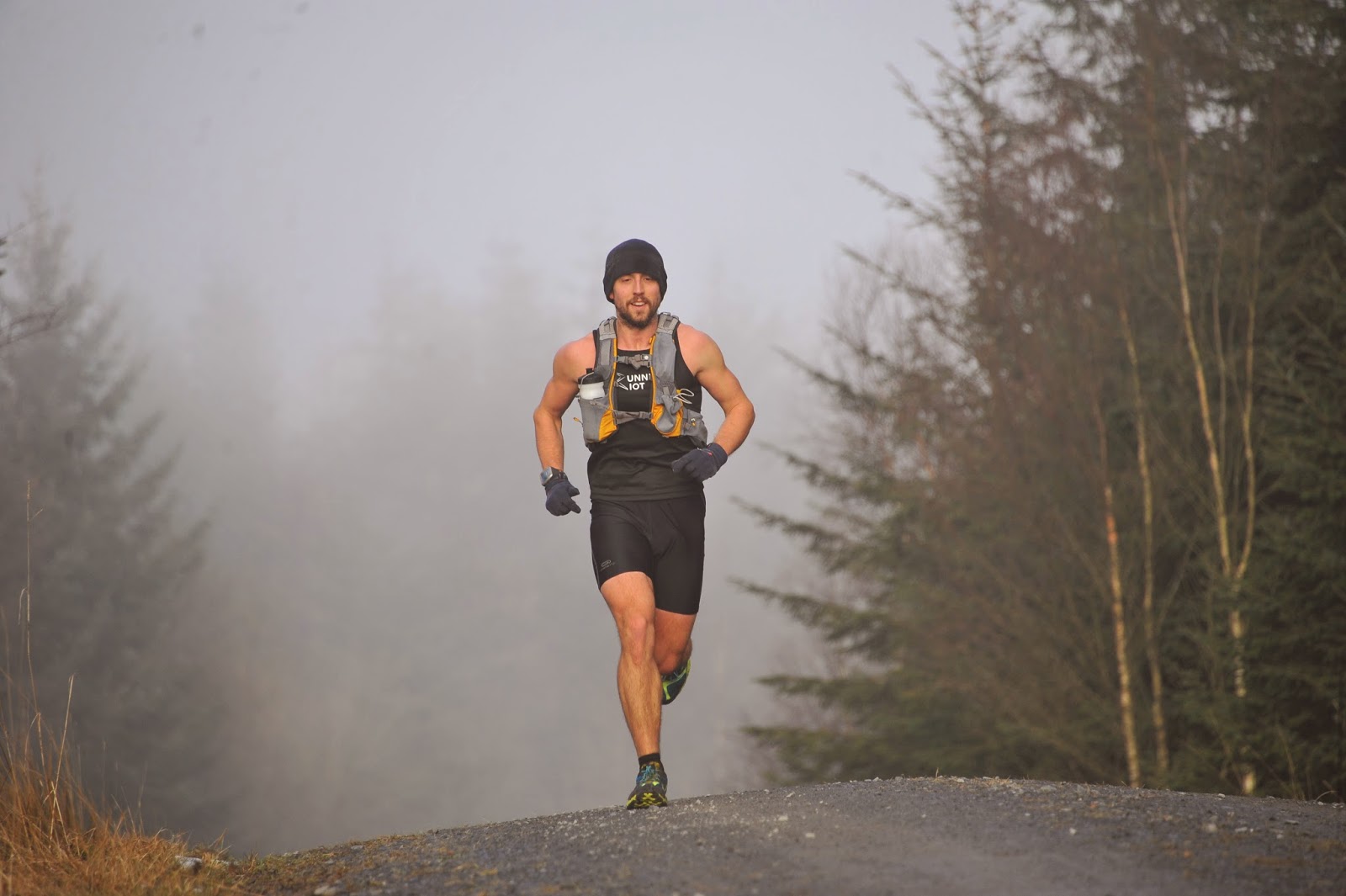 The second loop for the marathon crosses the road and ascends gradually into the trees before taking more forest tracks. I'd heard the second half was a lot tougher than the first, I found it much more enjoyable and having been quite relaxed over the first half I think my pace was actually faster in the second half, the tracks were a bit more technical in places although runnable and pretty fast going. As soon as we started ascending I moved ahead and into the lead and continued to build a gap over the next few miles as they undulated along through fields and tracks and through the mist before descending down to the shore of Windermere. A flat section along to the 3rd cp at just over 21 miles in 2 hours 30 mins.

I saw on the profile there were 2 small hills after this and after a quick hello at the cp headed off. I had thought if I was at 21.5 miles with about 10km to go then I could finish around 3.10 if I kept the pace on. When I hit the 25 mile marker I glanced at the watch and figured a more likely 3.15 to 3.20 as the route was 27.5 miles and pressed on passing some of the earlier bits of the course with some runners towards the rear of the field coming towards me all looking in good spirits. I turned a corner and continued along the main track passing a guy with a big orange bag who shouted 'Are you in the race?' I shouted yes and he said keep going and so I did. After a few minutes I was on a long straight track with no visible signs ahead for at least a few more minutes running and began to wonder... the course marking had been a bit thin to be honest but now I could see nothing ahead at all... I got the phone out and called the organisers and they said the guy marking the route wasn't back yet....

Turns out I had just overtaken him 5 mins ago and he wasn't sure where to mark the final part of the route thus sending me on the wrong way.... I caught back up to him and put him on the phone and Jo got him back on track. I was now running back towards the route and saw 2nd place running towards me obviously pretty frustrated too! I got my phone and we both set off running back towards the course and took the path to the right which hadn't yet been marked and I tore the last descent to bits just incase 2nd place had wanted to try some cheeky over take in the final km. In all looking on the Garmin data the course marking issues at the end ate up my 10 minute lead. It's the last thing you want to happen when you're at the end of a marathon. 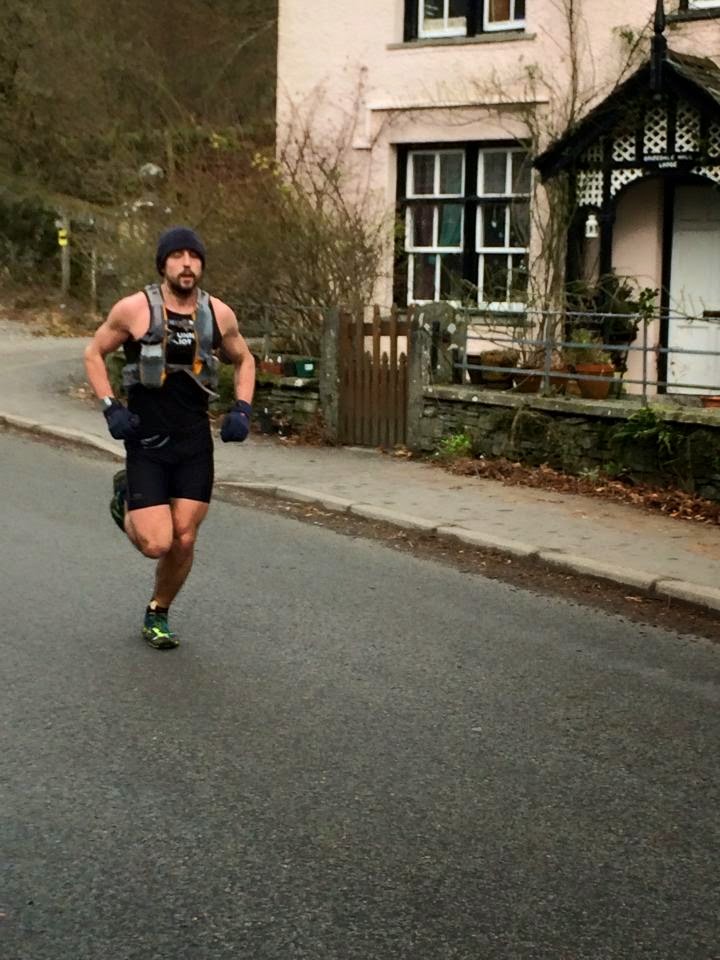 Apart from the course marking being a bit thin generally everything else was great and well organised. A nice trophy for the top 3 and also a Montane backpack for the win.
I have actually done a shorter ultra than this haha!
The night before was the Petzl night runner 10k race in the forest. I wasn't out to wreck my legs completely so set out as the forty minute fairy (fancy dress fairy outfit) at a comfortable pace. There were two runners a couple of minutes ahead but I rolled in 3rd and bagged a new head torch too! All in all a pretty successful weekend... sorry to those that got beaten by a fairy ;) 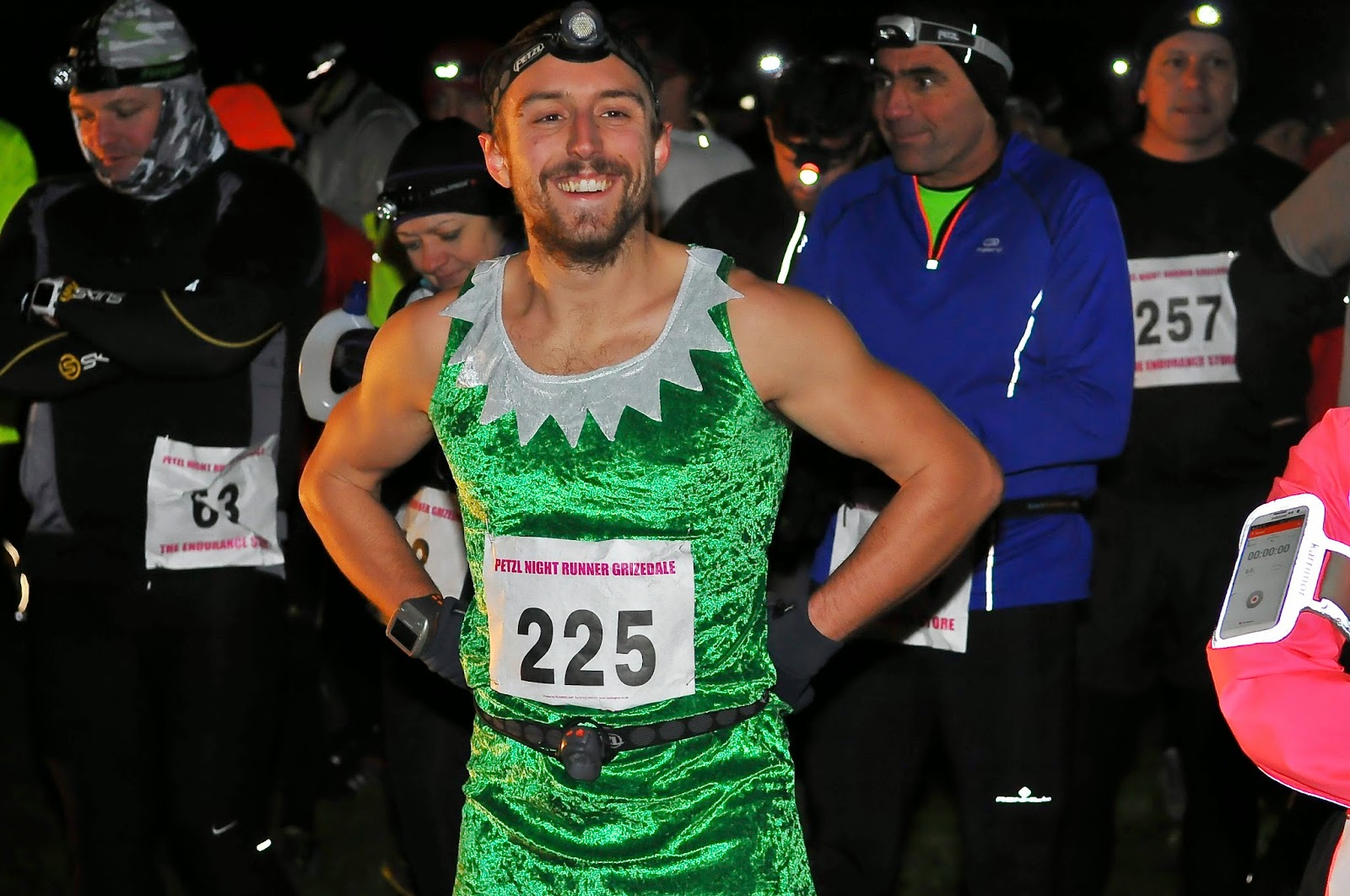 http://www.trail26.com/events-results.html For the race result.
Photos I got from the guys at http://www.sportsunday.co.uk/ who did a great job once again!
Posted by Charlie Thatruns at 09:46