The Sandstone Trail Challenge follows the way marked path from Whitchurch to Frodsham ... Not too far from Chester and Warrington. It's about 33 or 34 miles depending on who you ask. (Came out at 54km for me) There are no huge climbs with the highest point being Raw Head at 227m the trail clocks in around 1000m ascent.

I ran the event in 2012 and during the early stages lost my shoe in a cow field and twisted my ankle, although I continued to the end it didn't feel very good and I just had to hobble as best as possible in just over 5 hours. Since then I've covered the southern section of the route a couple of times so vaguely remembered parts but I was very familiar with the rest.

The idea is that everyone drives to the finish and registers by 7am before jumping on the coaches to the start at 7.15am then race starts about an hour later. It's about a 30 minute drive from my place and I forgot to set any alarm. Woke up at 6.20 and was in the car 5 minutes later! Arrived and registered just in time and was on the bus! It was a fantastic atmosphere from the off and great to see and catch up with some talented local runners who hone their skills and regularly wear grooves into the SST! Couple of breakfast 9bars and a banana wolfed down before the start and that was me ready.

At the start, a quick speech from the Mayor and we were let loose. I'd had a bit of a niggle in my quad a few weeks earlier so planned to ease into the run and just see what it was up to. I was sat in somewhere just outside the top 5 as we set off down the canal path probably just shy of 7 min miles. 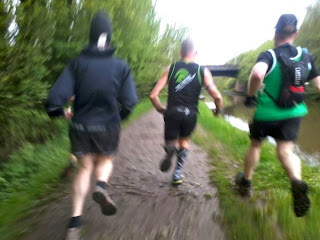 I moved up to the front after a while and just kept a steady pace going as we headed for the fields... I had expected the fields to be really, really muddy... They were but not as bad as I imagined. I didn't fancy thrashing myself through the mud early on so just kept a steady pace to first cp and then forgot about having to get my tally card stamped. Bit of fumbling and out it came, running away from the cp with Spartans Chris and Dave. The route starts into some elevation not long after and having held a lot back through the early stages meant I could run quite relaxed on the hills. I was loving the descents and did let the legs roll a bit down to cp2 at Bickerton. I really enjoy the sandstone-y bits of the trail, not the greatest fan of boggy cow fields and with plenty of grip underfoot the miles were passing by nicely. 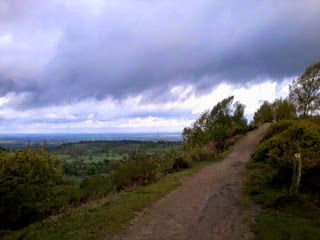 Conditions on the day felt warm though it wasn't exactly cracking the flags, it stayed pretty much dry apart from about a bucketful of rain. I was surprised that the muddy fields weren't in a worse way as I moved towards the Castles at Peckforton and Beeston and was descending into cp3 at some speed. Had to wait a moment for the guys to find the clipper for my tally card so had a drink and then was back to it!

Few more fields coming up to the next cp at Rock Farm which has a fairly long gradual climb towards it. At the top the path swings left and there's a clear view of where you've come from. I could see there was a decent gap behind as nobody was in sight behind, I guessed it must have been 5 mins or more and was feeling pretty comfortable as I set out towards Delamere Forest.

This section of the route I know pretty well and have done many races in Delamere so it was relaxed running through there and onward, or so I thought.... There were some quite excited horses around doing some sort of horse event so I had a fair bit of stopping and starting so as not to startle them (after one was jumping about all over the place as I jogged on the far side of the wide trail) didn't fancy being trampled by a horse....

At the last cp just outside the forest I was getting a bit peckish and so grabbed a couple of Jaffa cakes. The first one I ate whole but didn't really go down well with it being a bit dry so I chewed the jelly and chocolate off another two as I made way up the steady field paths out of the cp. I did a couple of stretches just to see how the quad was doing and everything felt fine as I rolled through the final miles up Frodsham Hill to the monument.

I knew from the monument there'd be no chance I'd get passed by anyone on the last mile ish of descent into the finish and cruised on down only stopping for a road crossing and when I dropped my water bottle before jogging it across the field into the hall.

The helper outers at the end were fantastic! A constant supply of tea and soup as finishers started to drift in. Fantastic to share the day with so many people. Great organisation and a fantastic friendly event. I'd anticipated finishing in 4.30 so rolling in at 4 hours 33 mins I wasn't far off! I was really happy to get a good long run in to test the legs out. 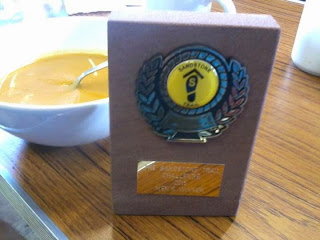 A few trail marathons and steady training runs over the coming month before Dragons Back. Looking to cause some damage to my CR at the Bolton Hilly marathon something in the high 2.50's should go if conditions are ok!

Look out for this one next year, Helsby Running Club organise it,
Race Directors Report here http://www.helsbyrunningclub.org.uk/sandstone-intro.htm

Posted by Charlie Thatruns at 23:31