This weekend I took to Shropshire, probably most famous for the Iron Bridge, Long Mynd and River Severn.... But.... To many new and seasoned ultra runners of the Apocalypse, it's now famous for...
Carding Mill Valley - the race start and finish near Church Stretton.

Pole Bank Trig point - the first 'summit' and checkpoint, 2 miles in when everyone gets confused as to why there are people running back towards them on the short out and back.

Corndon Hill - about 12 miles in standing at 513m, nice steep descent before some fast kms leading to the...

Apocalyptic Woods - with the path that looks like nobody has ever been there before, it's actually ok once you know where you're heading.

The Stiperstones - a rocky ridge lasting for a few kms.... or if you Google it, ''a wild ridge of quartzite tors surrounded by a sea of heather'' It's no Crib Goch, call it a rocky path then..

The Red Lion Pub - the 3rd and 4th manned CP (30/40 mile points) ideally fitted with a pub garden, ideal for basking in the sun and consuming vast amounts of sugary food.

Earl's Hill - the short sharp climb at about 37 miles, jog-able if you're really keen, or a quick hike will see you up it, great views off the top!

Wilderly Hill - a gradual uphill through fields for 3 miles, just where you want it at about 42 miles

Those running the 100 mile will probably have enjoyed other areas like the Wenlock Edge. (I did the 100 mile race last year, some slight course changes have been made since then reducing the elevation a little although I still don't think it would be called an 'easy' 100 mile. Is there such thing? Anyway...

Compared to last year the ground was more dry and there was a breeze to keep the temperature feeling a bit cooler. Some of the fields were a bit more rough on the ankles with the ground being hardened though I prefer it like that. I almost kept my feet entirely dry by tip toeing around the mud where possible but sacrificed one foot about 26ish miles in. I'd say conditions were ideal!

***warning technical stuff on pace calculating for my race if that sounds a bit boring just skip ahead  ;)  ***

To figure out a rough idea of timing and what pace I'd expect, I had a quick look at the route to see it was pretty much the same for 40 miles as what I ran last year in the 100 mile.
It's a 50 mile course with 2500m of elevation.
I ran 34 miles last weekend with about 1000m ascent in 4hours 33 mins -  felt comfortable, marathon split was 3.24 I think from memory.... So an extra 16 miles, an extra 1500m of ascent and about 8 miles of the route was unknown territory.

This leaves a little bit of room to play with for checkpoint time, opening hundreds of gates (well quite a few), reading the map/ directions, toilet stops, taking photos and if the course is slightly long on the gps etc

So with 8 hours as an expected time including a 'safety net' I had a good idea of what to expect and could run to what intensity felt right for the race.

On the morning it was ideal weather with a little breeze, kit check and registration was all fast and efficient and after catching up with some friendly faces it was time for a short briefing and the start. If you've every done a Beyond Marathon event you'll know how good their organisation is! 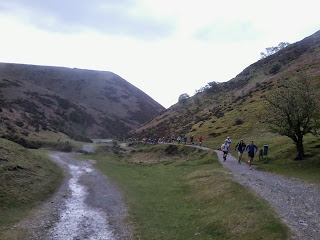 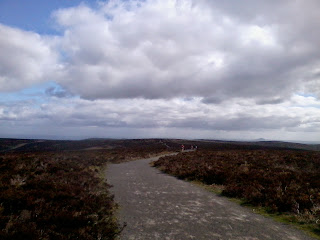 There was a small group of us at the front leading out of the valley as we ascended then proceeded along the good track to the first self clip checkpoint (you have a tally card that you need to hole punch occasionally) before turning around and retracing the path for a few hundred meters and hanging a left onto a nice descent. Legs were enjoying the hills and within a few minutes I remember I noticed that I couldn't hear the gates been opened or shut behind me but kept my eyes on the map and did my best to remember where I was going from a year ago! Before I knew it I had reached cp 1 @ about 1 hr 16 min about 7 mins quicker than the year before.

I moved along after topping up my water bottle and grabbing a handful of jelly babies, Corndon Hill was in the bag pretty quickly and I was dropping some fast miles over the other side. I got a little confused not long after as the original course went through the grounds of a large country house on a footpath but was changed before the race last year as the footpath was hard to find (on a previous recce i spent a lot of time walking around looking for it) after a moment checking the written route description I remembered and set off on the quite country lane around and on my way back to the now 20 mile cp. I was told I had approx 10 minute gap on the next runners at the 10 mile point and continued on for the Stiperstones. I thought someone might have at least moved the rocks for us this year. I imagine it'd be interesting when wet though the nice dry conditions we had were ideal. I didn't stop to sit on the Devil's Chair this time and on I went. I think it was about 3.56 when I passed the marathon distance putting me bang on schedule for 8 hours I thought.

Once you make it over the small hill it's quite fast underfoot down into the 30 mile point which I hit around 25 minutes faster than I did last year. I topped up my water and got to it dropping in just under 7 min mile pace on the flat sections I was feeling great. I got to the self clip and thought I'd lost my tally card and was just debating what to do when I did some more rummaging and found it had squashed into the corner of my waist pack. Phew. I took it steady on the next section leading up to Earl's Hill as I was keen to avoid my legs having an Apocalypse of their own. After here I could remember the route all the way back to the cp or so I thought. After turning the wrong way at the bottom for a minute or so I got the map back out and realised my mistake. Quickly back on course and off through the forest before a fast mile or two road section into the 40 mile cp in 6 hours 15 mins. Nearly an hour ahead of last year. I didn't hang around at the cp and a quick look at the watch suggested I could be between 7 hours 30 and 8 hours somewhere depending on how the next 10 mile section was. 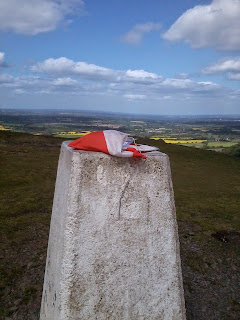 I followed the map closely and had the written route description to hand also. Some of the grass in the fields was pretty long which would have made for wet wet feet if it had rained but I couldn't help but notice the next 5 km section crossing quite a lot of contour lines on the map. It looked a long gradual uphill stint and it was just that! A few paths turned off here and there but we just maintained a straight line along until hitting a country lane and another self clip. With most of the elevation in the bag now it was about 5 miles to the finish and I had 40 minutes to do it to beat the 8 hours.

All was good until I got to a patch of trees with a gate through the middle, I went through and then through the next gate but on the map it suggested I should have been passing the trees to one side. I back tracked a few minutes and there was no path going anywhere else so I read the written description and it said I was right the first time, quickly back through the gates and I put my foot down over the last 2 miles to pick up the track down into Carding Mill Valley again. I didn't look at the watch just ran as hard as I could to try and stay below the hour.... too late! 8:01:32  I clocked in. 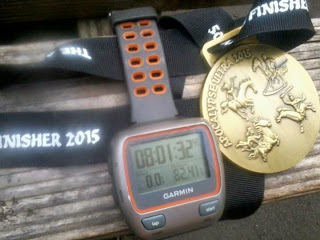 I had a really nice run, enjoyed it from start to finish, even those pesky 93 seconds at the end! Mentally I think because I was 'only doing the 50' compared with last time I ran I knew I was running the 100 miles everything felt easier than last year and with the conditions being slightly better, everything just seemed to flow. Had I been a bit slicker with the directions and got my foot down a bit more there's a small chunk of time to be sliced off in similar conditions without any extra effort.

The race itself is fantastic. All the crew as usual couldn't be more helpful and it was great to share the weekend with so many enthusiastic runners and helpers! Well done all! Same time next year perhaps? 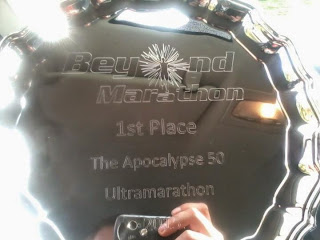 Posted by Charlie Thatruns at 13:58