100 miles of Istria, Croatia. Actually a sneaky 172km so a few bonus miles in there. With 7000m of ascent and a linear route (a to b rather than a loop) I'd never been to Croatia so thought I'd get an entry in! I found all the organisation was fantastic, all the pre race communications were really simple and it made the whole thing easy to organise. There are a couple of shorter distance options too, we in the 100 mile were first to start on the Friday evening in a town called Labin. The finish is in Umag along with the registration and busses are put on to get runners to the relevant start. So after an hour or so on the bus we arrived in the town square where there was a few undercover areas and a snack buffet to get us going, was nice to get a bit of pizza and churros with my 9bars! 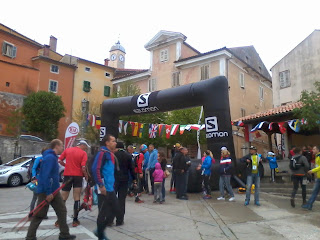 After a short wait we were grouped together in front of the start arch way for a photo, it was cool and the forecast was for cloud and some rain through the night and into Saturday. I was right up to the front of the photo then the count down begun... everyone proceeded to turn around and start the other way! Ahh... I crossed the line in something like 296th position oops... the first km or two is downhill on a single track which had the odd rock and was a bit wet but basically had to walk down here until the path opened out along the sea for a few quicker kms. The first proper checkpoint is about 17km and I'd made it to the top 10 or there abouts. I can't remember if it had just about gone dark then or was just about to, this photo is just before dark as we ascended into the hills the cloud thickened. 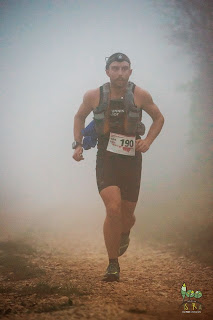 The legs had felt a bit stiff the day or two before the race but I put that just to the travel or maybe just because I'd cut the mileage quite a lot in the couple of weeks before hand? Any of the times I've had legs feeling stiff has been after weeks were I've run the least.... Anyway moving into the night I was feeling good and it felt warm on the whole aside from the last few minutes ascending up to the high point of the course at 1400m where there were some patches of snow to the side of the path. Vest and shorts weather! Progress through the night was good, although no rain as yet the ground was wet and rocks were very slippery in the wet grassy paths. There was plenty of skidding about and found myself running with 2 other guys on and off for a few hours. A few runners from the shorter distances had flew past during the night. I was coming up to the 83km CP which would be about halfway. A good long descent into the valley and I felt something in my quad, carried on running and a few steps later the same thing, I slowed thinking it might be a rogue cramp but could feel a dull ache still there. Nothing changed over the next few minutes and I stopped to do a few stretches whilst admiring the misty view of the valley in front. 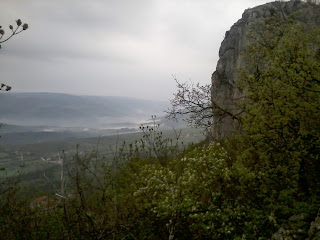 It didn't seem to feel any different so I thought I'd just carry on a couple of km to the next CP which was indoors and I could have a poke around and see what was going on. It was a bit further than I thought (I think 86km) but I got in just as it had begun to rain lightly. I got a drink then began to stretch out the hips and had a feel around in my quad, one of the muscles in the quad felt a bit tight and stiff compared to the others. I wasn't expecting my legs to feel totally fresh at this point but the fact that one particular bit of the muscle felt different to the other made me a bit curious. Whilst I was stretching I decided I might as well do something useful and got some extra food and drink down. The quad didn't improve so I decided to go steady for a bit and see if it loosened off. Any kind of downhill was becoming a bit painful, I could jog on the flat ok and walking uphill also was ok. I knew my pace had dropped but was happy to just keep going and surely I could just keep walking worse case scenario? 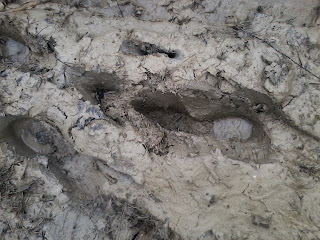 The route got a little muddy in places and we came across a cp inside a church which was pretty cool. Again I tried to release the muscle but nothing seemed to help. It did feel a bit worse than the previous cp but I continued on anyhow. The rain began to set in a bit heavier and I was thankful that I at least had good gear on to keep dry (Berghaus Hyper Smock which packs down to smaller than a fist) This was about the worst of the mud, almost reminded me of the Viking Way! I was glad I'd packed a spare base layer and a spare jacket. 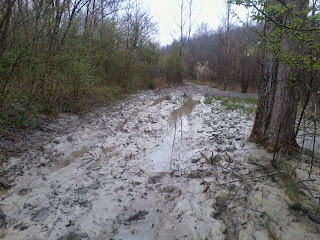 As I slowly made my way to the 110km cp it was quite open and there was no shelter from the rain so I wrapped a foil blanket around me to keep me under my backpack so I was totally dry. The cp was in a stone arch way so dry but with a cool wind blowing through. I knew the leg was getting a bit worse so I decided to sit off for an hour or so get plenty of food and drink in whilst massaging the leg then I'd carry on. After a quick change I began shoveling food down. Some runners coming through the  cp were drenched and really quite cold from the rain. Some were worried about going into the next night as they now had wet gear and wet clothes. I was glad to still be pretty dry and have a spare jacket and top to go on if needed but having tried to move around a little bit my quad was still tight. I decided to drop as something was clearly not right.

The day after the race my legs felt ok aside from the one part of my quad which was painful. It felt like I had run all the race just using one strand of muscle! I was limping about a little bit and just iced the muscle and took it easy. The following day, so 48 hours later than finishing the race, I could slowly walk normally but still feel some tension. After checking in with Richard for a massage when I got back there was a definite difference in the texture of the muscle, plenty of foam rolling and I did some gentle cycling and some upper body training to get me through the week.

2 weeks later I'm glad I did the right thing. Not had any pain although I've not really run more than 2.5 hours I'm confident to put some decent training runs in this week to see how we go. Looking back I didn't see the sense in limping to the end for an additional 45 miles for the sake of finishing, had I picked up a more serious injury I might not be able to do very much even now. I thought I'd be regretting dropping out at the time but it still seems like the only sensible option. I had done nearly 30km at a slower speed to give it time to loosen up.

The race itself... fantastic! The wet ground made for difficult conditions in places. I think the leg issue came about from a combination of being a bit stiff after having 2 easier weeks and also a lot of sitting during travel (aside from driving or cycling I rarely sit down) it was probably made worse from regaining a footing numerous times on the slippery descents.

Doing a little less running has given me some more time to get planning the next trail run coaching holiday for later this year. I'm just looking at possible locations although I'm keen to repeat the location from February! Here's a little trailer to whet your appetite http://youtu.be/J08bO_qAG20

Posted by Charlie Thatruns at 12:30