I saw the race website a few months back and thought WOW! Mount Teide is 3817m high and the race 0 4 0 was to go from sea level (on the beach) run up to the summit (about 18 miles) and then return back down again. Starting at midnight a marked course, checkpoints and probably some sunshine! Sounded perfect! I got my flights booked and hotel sorted and was ready to go! About 2 or 3 weeks before we were due to run I got a phone call from the organiser to say that basically they had been unable to get a Race permit to access the summit...

As it stood we would still have an event only we might have to turn around just below the summit where there is a warden during the day (you need a permit to access the summit during the day, the permits are free I believe just need to be booked in advance) we were told we needed to be at the summit before 8am from a midnight start so no worries there. Still a marked route and checkpoint and some guide runners too.

I've been asked by a lot of people what happened and got a lot of worried sounding messages wondering why I hadn't started the race if there was something wrong with me etc. Thanks for the support guys! Just wanted to share with you what happened.... 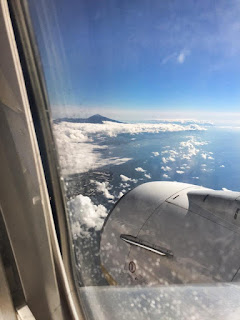 I flew out on the Friday and caught up with Dave and Melissa who I've known a while from various races. The race was due to start Saturday night as the clock hit midnight into Sunday morning. We met at 7pm in the hotel for dinner so we could grab food and get our heads down for a snooze before running through the night. It was now that we met up with the organiser and he informed us that there would be no support or checkpoints or guide runners or markings etc basically we'd  be all on our own.... Obviously we were pretty crushed but determined to make a good run from it somewhere. Between myself, Dave and Melissa and some phone calls to other Brits running we came up with the idea to run the following day at 3pm on our own backs just to give us time to re prepare. Now around 8pm we were informed by the organiser a group of Spanish runners were going to do it anyway and had got a water supply up to 2000m (roughly half way) they were starting around 11pm though and details were very vague... We decided to get our stuff together and give it a shot.

We crossed the beach to touch the sea and saw some runners had already begun and some were still preparing, very much a free for all. After starting ourselves it very quickly became spread out and there was nobody to follow. After maybe 30 mins or so I'd hit a track which was going around the hill side towards a town, it didn't seem right as we weren't climbing much anymore so I waited for the torch to catch me up that was running behind. It was Melissa and we continued on together. There was lights of a town just ahead so we decided to continue to there to check on the map where we actually were as the marked trail we were expecting hadn't really materialised. The road meandered around the hills and on reaching the village found we were 4 or 5 miles off route. Checking the map that we'd got (it was a pretty vague scale but the best map we'd been able to get hold of at such short notice) there wasn't really any good way to get back to the route except the way we had come.
With everything that had gone on we decided to make our way back to the hotel then start the route at 3pm the following day! Seeing as it had long since lost the title of a race we just had to get up and down that hill one way or another! 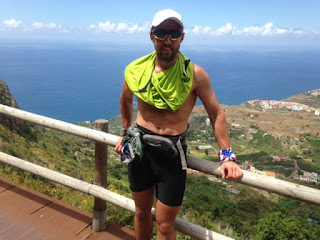 So 3pm the following day (Sunday now) we set out from the beach - Myself and Melissa with the plan to get up then get back down to meet the organiser for a lift back to the hotel. He waited out for us well into the night and we finally got back to the hotel at around 3am having run up the mountain! 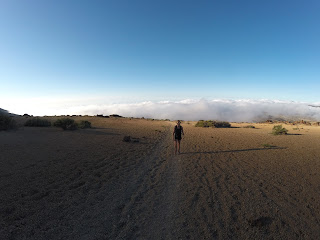 The concept of the event is fantastic and the route itself will challenge runners of all abilities in one way or another! There is a couple of km during the middle that is a bit less steep climbing but other than that the whole way up is a decent gradient. We broke through the clouds just over 2000m and got to see an amazing sunset from about 3000m.

The route gets pretty rocky in places. With a bright torch it's easy to spot the trail within the rocks, during the daylight it would be fine! There is a particularly stiff climb up to a refuge hut (essentially like a hostel up a mountain) around 3200m we ducked in to get a drink and something to eat from the vending machines. It would be an awesome trip to get out on a multi day run stopping in these places! Really nice inside! The manager was happy to change our money for Euro coins. Once we were topped up we set off for the final push for the summit which was quite interesting. The wind was cool at this point if you were to sit directly in the path of it but as you ascended there were pockets of very warm sulphur smelling air where there were holes in the rock. Pretty cool! We followed the chained path to reach the summit where we sat out of the wind to try and get a photo. Phone batteries didn't last long in the temperatures. 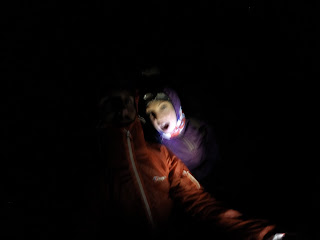 We began making our way down the incredibly rocky descent. Melissa is a little more careful descending and so we take our time back down towards the refuge. We're now well in the dark but still above the clouds and looking up the sky is illuminated with stars. There is no wind any more and it's the perfect conditions for a night time run! Together we worked our way down to meet the organiser who had waited out to give us a lift back to our hotel. He had a can of coke and a bar of milka waiting for us which went down a treat after a long run out in the mountains!

We all had a fantastic trip aside from the obvious. It was great that we were able to get up the mountain and experience the stunning terrain! I really hope the race can be put on successfully somehow next year. A really challenging route, if you'd like to have a bash I'd suggest getting some practice in on some steep and very rocky ground.