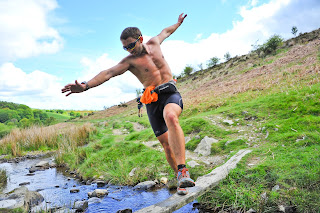 Excalibur is a trail marathon in the Clwydian hills for the Claire House charity. It's pretty tough as trail marathons go with 1700m ascent or about 5500ft. The highest point is 500 and odd meters but lots of short sharp climbs soon add up! Trails are fairly easy going, a few bits of rocks here and there some grassy fields but on the whole good tracks. Lots of well stocked checkpoints and course markings and marshals were fantastic! Really well organised too! 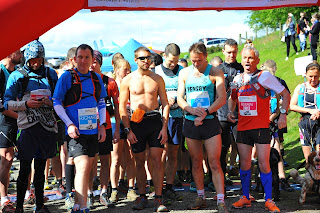 On the day it was pretty warm and there was a quick kit check before a briefing. The race also has a half marathon option which shares the same start for about 1 mile. It was great to catch up with plenty of friends who were doing the various races once again! From the start there was about 7 of us in a small group, I was having a glance around at the numbers to see who was doing the half and who was doing the marathon, turns out at the split everyone else turned on to the half route so I was alone leading the marathon. After a couple of minutes just before a steady ascent on a wide trail I heard some heavy breathing and some loud feet then had a couple of runners on my shoulder. A little bit of chat and it seemed like they were working quite hard to maintain the pace up the climb. As we reached the top I moved ahead and began to create a gap. 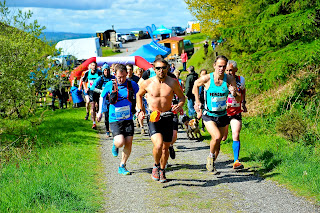 In terms of pacing I'd expected to take about a minute per mile off my time from 2014 which I won in 4.03. On a good day and a bit of effort something around 3.30 would be possible. For today I expected a little slower than that around about 3.40 with the upcoming Bolton Hilly Marathon and Scafell Pike Marathon on the 6/7th June. I wasn't really sure on any particular split times from last year but felt like I was moving well. It was great to see Laura and David from Sport Sunday taking photos on the course! Excellent and supportive as always! www.sportsunday.co.uk has all the official photos! 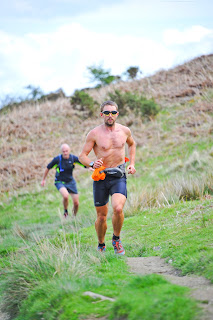 The course is pretty consistently up and down, not many flat sections, I'd say 4 bigger climbs but plenty of shorter sharper ones to go at too in between. After a few miles the  course joins back to the half marathon runners so I was gradually moving through the field which was nice to have people to chat to during the run. Everyone was very encouraging and seemed to be enjoying the day! As we reached about half way at the furthest point of the course I could see 2nd place in the distance so kept the pace on over the next few miles so he didn't get any ideas. 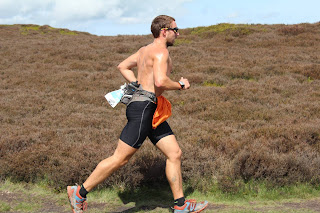 The longest climb coming up from about 20 miles to 22.5 miles I thought would be an ideal point to put a bit of effort in and make sure there was still a good gap. I looked back from the top and thought I must have about 3 minutes to play with. Knowing the route, it undulates another 2 miles before Moel Famau. I kept a steady pace and enjoyed the final miles towards Moel Famau just shy of 2 miles from the finish and all down hill from here. I had a quick chat at the checkpoint there and looked back... Would I need a sprint finish? .... No sign of 2nd place so I must have had a couple of minutes gap at least. I jogged it down to the finish knowing that for someone to make up a minute per mile on me (or more) whilst I was doing just under 7 min miles would be a big ask. 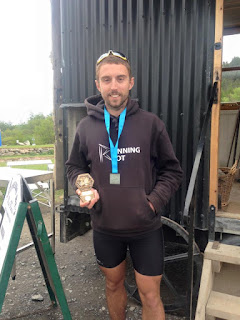 I finished in 3.42 so about 21 minutes quicker than last year. I knew it'd be a quicker time than 2014 and was around about where I expected. I also ran 20km the week before taking in the bigger climbs of the route and even at a comfortable pace was quick on all the ascents compared to the previous year so I was confident on my prediction. I'd also picked up a 2nd place in the Harrock hill 8.5km race during the week which was my best time there too. I didn't realise how hot it was on the day and should have taken some electrolytes in hindsight.

If you're after a tough but friendly and well supported trail marathon, this is one to look at!

Posted by Charlie Thatruns at 12:08