The Berghaus Dragon's Back Race 2015 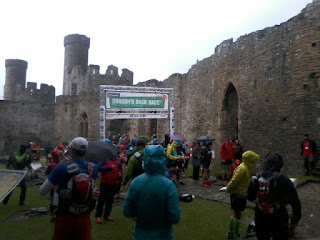 ''The legendary Dragon’s Back Race™ follows the mountainous spine of Wales from Conwy Castle to Carreg Cennen Castle. This incredible 5-day journey is approximately 300 kilometres long with 16,000 metres of ascent across wild, trackless, remote and mountainous terrain. It is not a trail race''

Basically it's a long way, pretty hilly and the ground is rough. The route is split to 5 days and depending on your finish time the day before, you are given a time window to set off the next day between 6 and 9. Folks with the quickest finish times start later and those needing a bit more time started earlier. The course cut off time was 11pm and each day there was a cut off at the halfway checkpoint too. Fastest runners were averaging about 8 hours running each day whereas those at the back of the field who completed the event were averaging about 15 hours per day!!

For multi day racing there is a fine balance between running too hard and wearing yourself out and running too slowly and wearing yourself out... What do I mean? Well the competitors taking the longest effectively get less rest and have to start earlier the following day. After day 1 I'd finished around 4pm, showered, rehydrated, had a couple of meals, lounged about in the sun and was feeling quite refreshed by 9pm when there were still competitors coming in to the finish who would have to rush down some food and sort their kit ready to be up at 5am to eat and prepare for their start time. Equally though you probably don't want to hit the first day as hard as you can to the point where your legs can't hold you up the next morning!

On paper the distances don't sound too crazy for your average trail race.. I estimated each day of the DBR would be double the time I'd race on the trails for similar distance. To be fair that estimate isn't far off and we had near ideal weather on the whole (few spots of rain on the final day aka very wet on the higher hills)

In 2012 I was part of the marshal crew and got to do a bit of running on day 3 and day 5. I also knew the majority of day 1 as it's my usual training ground around Snowdonia when in the hills. Aside from that there were a lot of unknown areas which I was looking forwards too! I had decided not to try and recce the route as it might dilute the adventure a little bit. I expected day 1 and day 5 to be my best days in terms of positions which was fairly accurate.

My typical daily routine was to wake up an hour before starting, wolf down 2 9bars and a bottle of water then make my way to the catering tent for an egg sandwich and a couple of cups of tea. Return to tent, stuff everything into my overnight bag (transported to the next camp) and put a fresh bag of jelly babies into my running backpack, top up the water bottles and get to the start line. Run a long way, recovery shake immediately after finishing, get washed and clean, drink tea, eat cake, drink tea eat meal, drink, eat, some mobility exercises, drink, eat again before heading to bed with a bottle of water and snacks for the morning ready to eat straight away.

My running backpack I didn't alter all week, same kit in there, just added a bag of jelly babies to it in the morning. My drop bag for the half way point also stayed the same I picked up a second bag of jelly babies or meerkats at half way point from it most days. Effectively on the course I was eating 1-2 bags of jelly sweets and over the week I had 2 or 3 gels. Aside from an ice cream stop on day 3 and day 5 that was it during the running.

In terms of kit I carried the Berghaus Hyperlite smock and waterproof trousers along with a long sleeve top, the power stretch gloves and hat in my race vest along with the other usual compulsory kit. I ran in the same pair of Vapour Claw shoes all week. For socks I wore injinji toe socks for the first 3 days and some random coolmax hiking socks for the final 2 days. Apart from a scrape on the ankle bone from a rock and a little abrasion on the top of my big toe from kicking a rock running through some heather I had no blisters or anything to deal with.

Had the weather been more wet then I probably would have changed my top and jacket at the halfway point too. I think it would be a whole different experience in bad weather! I didn't bother to change socks at half way because they would have got wet pretty much straight away again anyway.

So now I've all the logistics out of the way... On to the start line we go in Part 2!

Posted by Charlie Thatruns at 21:34