What have I been up to recently? I built the parallel bar and pull up bar set up and have been having a bit of a play about. I plan to put a brief how to up for the construction to help out anybody who is doing something similar and there will no doubt be a couple of new training videos popping up soon!

Posted by Charlie Thatruns at 19:34 2 comments: 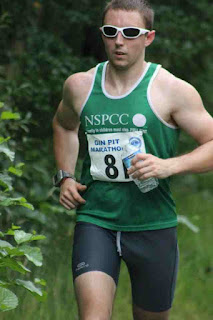 Malcs trail marathon based from Gin Pit near Leigh, was a bit of a puddle dodger but a great opportunity to catch up with some friends and also some of the 9bar crew Denzil and Vicky. As marathons go it's one of the more local ones for me however after looking at the weather forecast (light rain followed by rain) I opted to drive.
Anyway I arrived just in the nick of time (and didn't miss the start for a change) for a nice steady run around on the paths and trails. The course is pretty flat and involves laps (I think they were just over 4miles each) with some slightly slippery bits here and there and some puddles to jump. Malcs events are always friendly with the emphasis on getting a good group of runners together rather than racing your legs off.

After about half way it began to rain and this didn't 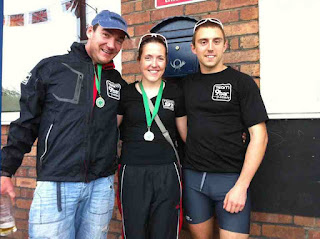 make things any less slippery however it didn't dampen the morale of runners as we all ticked away the laps. 6 laps if I remember right? Coming around on the final lap 300m before the end I could hear some footsteps behind me, it was Malc the organiser himself, we ran in together and I let him pass for 3rd place. I was quite slow for the course (around 3.30) but I had a good day out and finished off with a pretty heavy kettlebell session later in the afternoon to give the legs a bit of a workout. Well done to all and thanks to Malc and his crew of volunteers for putting on another fun and friendly event!  He also organises a double marathon in March (26.2miles on saturday then again on sunday) although that is a single loop rather than laps, mostly on canal paths and disused railway lines, again another good friendly one if your looking for a good training weekend or a new challenge!
Entries and the organisers blog found here http://www.malcsblog.net/

Posted by Charlie Thatruns at 17:24 No comments: