I first spotted the Andorra Ultra Trail a few years ago as I trawled through race calendars looking for 100 mile races and with it falling in a busy time of year it's clashed with a few races I've done in the past like Lakeland and Al Andalus, so this year I decided I'd shake things up rather than do the same races over again and get entered. 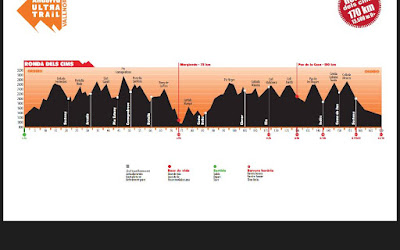 The first thing that struck my attention was that the ascent is more than double that of the Lakeland 100 and about 35% more than the UTMB or Northburn 100 milers. I was fully expecting it to be the hardest 100 miler I've done. The previous winning times are over 30 hours and the cut off time is 60 something hours to give an idea. Seeing as my body doesn't cope well going over 2000m I knew I'd have to at least get out there a little bit before hand to get a feel for it.

After my last trail run coaching holiday in June I headed over to Andorra and completed the majority of the route (about 90%) in 4 days carrying a small pack with my overnight stuff in. Generally when  I spend much time above 2000m running I feel totally breathless even at walking pace. The average height of the race is about 2100m with only the start and finish and the mid way checkpoint down at around 900m. 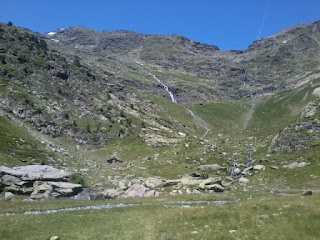 In terms of planning I reckoned with a 7am start on the Friday morning, I could finish at some point on the Saturday, maybe just before dark. I expected somewhere between 36 and 40 hours depending how badly the altitude got me. The legs are stronger than ever at the moment so I didn't really consider having any problems in that department, and after recceing the course I knew what I was in for, the big ? was how my body would do with the altitude.

So lets drop straight into race day and just before 7am everyone is gathered in an old street of a small town Ordino in Andorra, there's a buzz of excitement around as 397 runners are ready to depart with a short loop around the town before starting the first climb, over the first 15km we climb up to 2600m the first high point on the route profile, I believe there was 16 points over 2400m. I started pretty conservatively knowing that there's obviously a long way still to go. I was probably just inside the top 30 and passed most of the climb talking to a Japanese runner who would eventually finish 2nd. 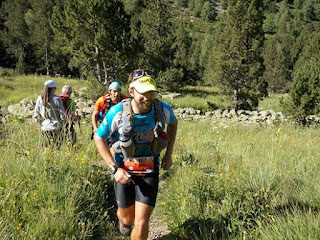 After a long descent down to the first checkpoint at Sorteny Refuge just under 20km in just under 3 hours I was feeling ok so far and moving quicker than on my recce run as with the course markings it was very easy to follow the route. I was in a good rhythm and moving ok but started to feel my breathing deteriorate around 30kms in. There literally was not a cloud in the sky for the whole weekend and the views all around were amazing. I was excited about heading up to the highest peak of Andorra at just over 2900m, Comapedrosa which would be around the marathon distance having done over 4000m of ascent to this point. My pace was barely moving as I gasped for breath just trying to move forwards. I knew we'd drop down lower after this so kept pushing on slowly to be greeted at the summit by a bag piper and some enthusiastic marshals. 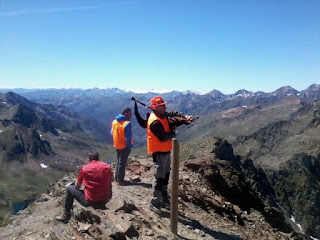 A couple more climbs, some massive descents and about 25km I would be at the first big aid station and looking at the time I figured I'd be there before it went dark which despite how bad my breathing was I was still moving well enough to finish just inside my expectations. I passed the next few miles with a Spanish guy and practicing my Spanish on him seemed to pass the time well. It wasn't long before we reached the descent into Margineda and we slowly drifted apart, I even passed a handful of runners. 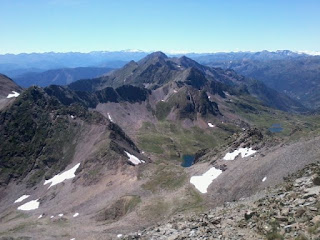 I'd been managing to take in more calories than I normally would and spent about 10 minutes at the checkpoint eating drinking and getting the head torch out etc ready to push on into the darkness. From memory I think I was about 25th at this point. The next few km is a pretty aggressive climb of about 600m before a lot of climbing from 1200m to 2600m which took me about 4 hours for 8 miles!

The first 50 mile had taken about 17 hours 20 min knowing I had just over the same again to do I thought that my finish time would be probably 38-40 hours if I continued at a similar fashion. My breathing was particularly bad here and I spent a lot of time just sat down taking deep breaths and coughing a lot which was frustrating but I persevered and tried not to look at how slow I was averaging. The next section all the way up to the 130km/80 mile checkpoint at Pas de la casa is pretty remote, there are no roads or anything other than a couple of old stone shelters and huts, I guess if you set off on this section you've got to keep going until the checkpoint otherwise you'll still have a 3 or 4 hour hike to get off the course down to a road. The section stays above 2000m with 5 main climbs to 2500m/2600m or so. 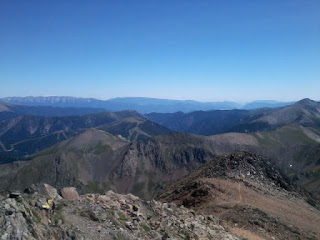 I had an even rougher section through here as I was coughing a lot and having to rest every few minutes even when slowly walking up hill. I had a dip in a river a couple hours later as the weather was getting nicely hot again and after that caught up with two ladies who were moving along well. Myself and the American lady were pretty close together for about 30kms and although my legs didn't feel like they were doing anything, my lungs were working hard to even keep up.

After reaching the Pas de la casa checkpoint I knew it would be tight but I'd be able to finish pretty close to darkness and I was fairly certain I'd finish before midnight. There are 3 big climbs then a final 15km down hill to Ordino. It's basically a marathon from the 80 mile point but you can forget your usual marathon pace when there's a few thousand meters of ascent and you've already run for about 31 hours. I basically just continued on as fast as I could manage (slow as!) and ticked off one climb at a time. I wasn't feeling any worse now, just coughed and wheezed my way along. On the final descent I passed a handful of people, my legs were still happy to run as fast as my lungs would let them. I reached Sorteny checkpoint for the last time and whipped out the head torch for the final 8km or so. It seemed to drag a little looking for the finish but there were still supporters out in the town as I rolled in at 11pm on Saturday night having run for around 40 hours 30 minutes. Have a look at the kit I used here http://charlie-sharpe.blogspot.co.uk/p/my-kit.html

In terms of how I feel about the race, it's about where I expected time wise though it's just frustrating that on the races where there are significant amounts run at altitude, my performance declines heavily compared to those where the highest altitudes are 2000m or so. It's a fantastically organised and challenging event, I was disappointed there are no finisher medals (you get a nice jacket instead) If you like mountains you should definitely consider a visit to Andorra! There's a lot to do from hiking, running to climbing and mountain biking etc.

Posted by Charlie Thatruns at 11:28 No comments: