After a couple of months racing and training in Europe I had a spare weekend before I came out to France to hold one of my trail running coaching holidays and it just nicely coincided with the Shropshire 3 peaks race. 40 miles with just over 2000m ascent. I know the area quite well after doing the Apocalypse 100 and 50 mile and also The D.O.N in the same area. Although I didn't specifically recce the route at all but I found that I knew more than half of it from those events.

I like the idea of a linear route and got entered. Soon enough race day, 4 am alarm, in the car at 4.30 and in Ludlow at 6.05, time for a quick drive around the finishing miles and a few laps of some small back roads to find the Rugby club and get registered. Bus to start, all on time and we're gathered just after 8am to hit the trails.

I ran with the Garmin which I'd loaded the route on although didn't really need it initially as the route description was great. Pretty much a few minutes along a narrow trail before it opened out into fields and tracks and small country lanes to reach Stiperstones village and the first bit of ascent. The first climb is about 3km gaining 250m so over before you know it. As I jogged up the views over Shropshire came into view and I have to say it was pretty stunning! I had the Stiperstones ridge to myself and knocked out the next fast 5km section at a good pace before another gradual climb of 3km gaining about 200m up on to the top above Carding mill valley. I descended pretty fast and hit the first checkpoint just over 1 hour 20 for 17km and carried straight on to the ascent of Raglan (not one of the 3 highest peaks but a nice addition) This is probably the steepest climb but it's barely even 1km long so over and done with pretty quickly before some more fast kms to Eaton and up on to Wenlock edge and the 2nd cp at Wilderhope Manor.

One of the volunteers cars wasn't too keen on making it to the 2nd checkpoint so a bit of quick thinking and Wendy was ready and waiting for me with some water before following the route from The D.O.N in reverse (pretty much) to get to Brown Clee hill. I got a bit confused after the hill and spent a couple of minutes figuring out what trail to take about a km later as I'd realised I left the route description at the previous checkpoint. I got the gps out and checked the map before making a second mistake not long after as I ran down a farm track that was parallel to the footpath and reached a dead end. Just a careless mistake to be honest when I realised.

I was closing in on the final cp and also the final hill. It was perfect weather. Not seen a cloud so far and it was nice and warm now in the sun. I stopped for a quick chat at the final cp and I was now in totally new trails that I'd never been on which was quite exciting. I was told the gap behind to 2nd was likely to be over an hour by now though I looked at the watch and thought I could still make the sub 6 hour time. I made my way steadily up the climb and passed a few walkers here and there. You're again rewarded with some fast kms as it's pretty much downhill all the way to the finish over the final 10km. For me the trickiest bit to navigate was the final couple of kms of fields. The signs are there and the route description was pretty spot on it's just a little bit fiddly looking for styles and gates in the fields and hedges. Some lively cows just near some sort of big water pipe/ river that decided they wanted to run around in circles with me until I spotted the gap in the hedge to get out of the field and hit the final road section down into Ludlow and through the town. I pushed quite hard over the last part to try and sneak under the hour. I knew it would be close but didn't look at the watch and just ran.... At least I was 5minutes off the hour and not 1 minute off! 6 hr 5 min all done. I was happy with how the legs did, a bit of lazy nav cost me those few minutes. 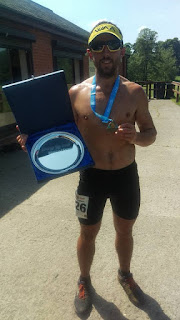 After the finish I grabbed a shower and plenty of food and drink and waited just over an hour, as long as I could but had to get back up home for dinner out and a flight after that and so didn't actually get to see anyone else finish. The 2nd and 3rd runner came in together just as I was driving out.

It's a great route taking in many of the Shropshire highlights! There are some great trails indeed. It would make a good first ultra providing you're able to do some easy navigation and have basic map reading skills. Mostly good trails and runnable with a few climbs thrown in there to keep you entertained! If you get the chance to do this route I hope you get such beautiful weather too!
Thanks to the team for looking after us all and well done all who made it out of bed so early to take on the race!
Posted by Charlie Thatruns at 18:03 No comments: