Beskidy Ultra Trail 220km (BUT 220) 11 000m ascent.
A first time in Poland for me. I saw the race pop up on an advert and the elevation grabbed my attention. Anyway, within 5 minutes of being on the site I entered and booked some flights seeing as I'd not been abroad on holiday yet this year.

This was a much more hilly race than what I've done before although not quite as long as the Viking Way it was far harder due to the terrain, navigation, gradients and generally unfamiliar territory.
It took me 41 hours 7 minutes and some seconds which is the most time I've run for.
I really enjoyed the event aside from a bit of frustration regarding the markings, just waiting for the medals to be posted out too as they weren't ready for us unfortunately. I'd recommend the race if you're after a big challenge although I'd like to experience more countries and different races before I go back. It's going to make Ultima Frontera 160km in 2 weeks feel easy ;) 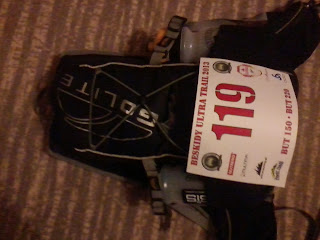 The course profile below does obviously look hill highest point 1725m in the middle there. I usually look at race profiles and think wow that looks hilly, then turns out that the hills weren't as bad. This is the only race i've looked at a profile and thought hmm tough, and then it's actually even tougher than I imagined. 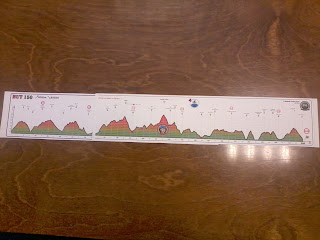 In terms of training for it I didn't do anything specific but have been running on the most mountainous terrain I can most of the year which has meant travelling to the Lakes or Snowdonia and the odd weekend in the Peak District. Despite this even the biggest climbs we have in the UK didn't seem to add up to what Poland had. 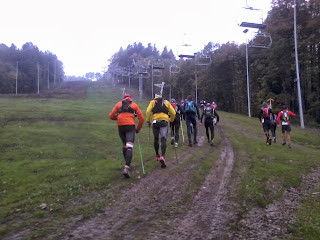 The race started 8am Friday morning and so I ran from then all day, through the night, then through Saturday and finished just after 1am on the Sunday morning. It is the first time I have actually fallen asleep and fallen onto the ground whilst running, literally as if someone just switched me off. A quick dust off and then continue. 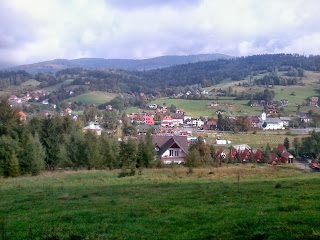 So the race started with a climb up over 1000m within the first 10k. It was pretty cool on the start line, I opted for a long sleeve top and gloves which I added a jacket and hat to at various points in the race. It was a nice temperature to run in although you'd soon get cold if you were stood around. 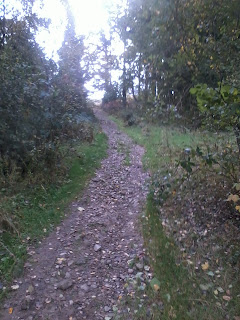 After a couple of climbs and a few hours of running the field was very spread and I didn't see anyone around for much of the first day. I was running somewhere around 10th I guessed although my main focus was to stay on track and just keep going at a steady pace. Some stunning views off the peaks. Much of the areas we ran through turn into ski areas through the winter. The only bit of ice or snow was on the highest peak which I hit in the early hours of the Saturday morning. 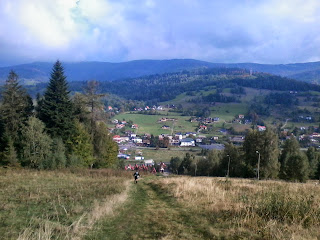 Much of the trail was forest tracks with some technical root and rocky sections too. Some areas where seemingly being deforested and had branches lying around to stumble on. The weather stayed dry despite some heavy rain the day before the race. With some rain the course would have been incredibly technical and much more strenuous! 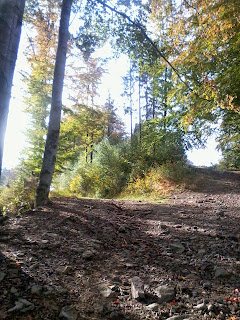 The average trail conditions for the race. Nice! 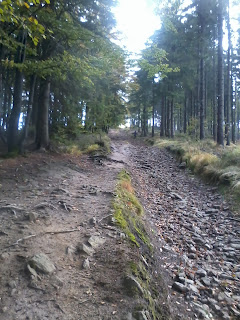 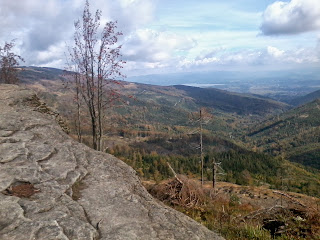 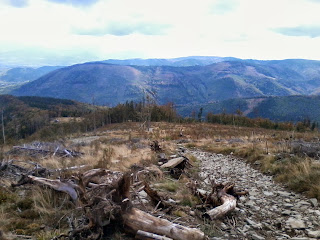 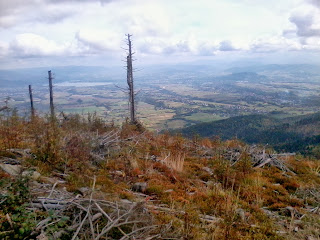 Generally each section was a big climb up from a town, a long descent into another town, a couple of km across the town and then to a CP then repeat! 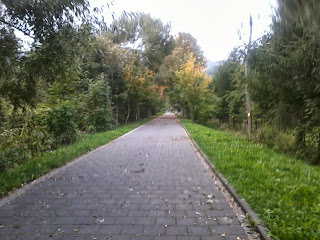 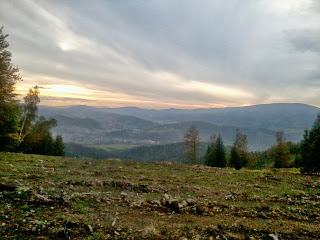 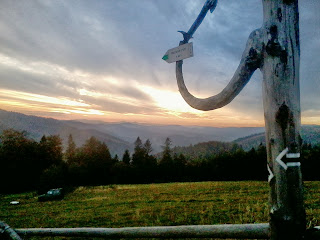 Sunset on the Friday night. Was really great to have the views. By this point I was around 80-90km in after 12 hours. Quite slow going for me although considering the terrain I was happy and moving well. 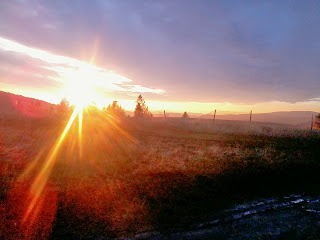 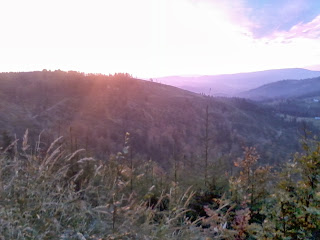 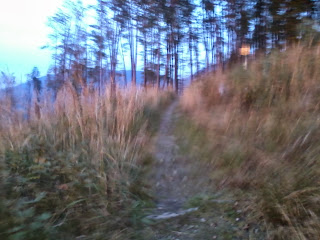 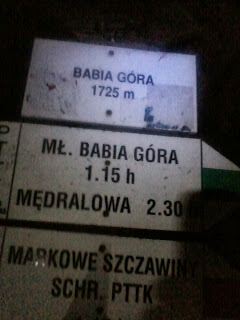 The highest point of the course, there was someone up here in a sleeping bag (nothing to do with the race) I imagine the sunrise up here would have been a sight to see especially on such a clear night. It was a couple of hours after this where my falling asleep running episodes occurred. 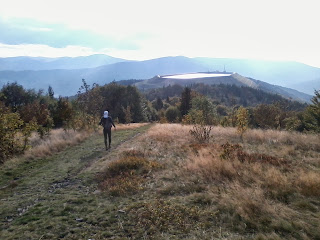 Here on the Saturday evening. Approaching some sort of reservoir at Zar which seemed to take forever to run along. After this was a loooong sustained descent. I could feel the heat from my quads going down this! There is a GPS assisted Hungarian chap who I had the chance to run with for many hours during the Saturday, eventually we parted ways and I moved ahead as the course became more well marked towards the end. 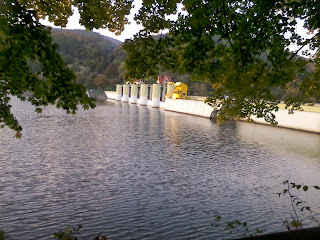 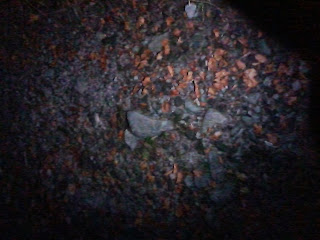 The average view during the night, the odd adrenaline boost when you shine your torch around and see dozens of eyes reflecting back in the woods (presumably deer) and then the rustling and trampling and pounding of footsteps as they run into the darkness. 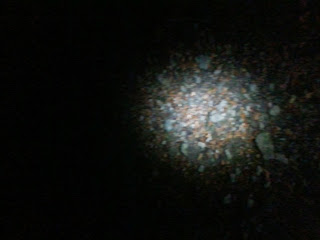 And the view from the hotel the Sunday morning. Beautiful weather again, The last finisher was some 59 hours! The race had a cut off of 64 hours. To put that in perspective I'd finished, had a night in the hotel, travelled to the airport had a few hours there, flown to the UK, driven home and had dinner and there they were finishing. That is an epic performance in my view! Good on them for being so determined and keeping going for 2 and a half days!! 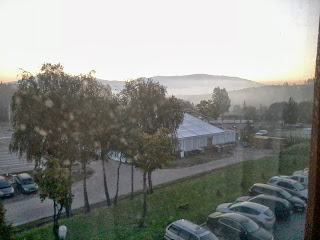 Some top tips for racing abroad...
1. If you have GPS use it and get the route in! If not get a good map of the area. We were not meant to need maps as we had a well marked route and instructions but for a few spots these weren't enough and I had to wait for competitors to catch me who knew the way. I would have saved literally 3-5 hours with a map.

2. Find out as much as you can about the area and trails and weather etc. You can plan your kit better and shoe choice etc, I had my kit spot on although carried some extra layers and spare jacket 'just incase' and didn't need them although If I'd had to stop anywhere high up I would've needed them.

3. If you know a few basic words of the language it'll help. Things like thank you, hello, water, etc although there was always someone that spoke English everywhere I went.

4. Train appropriately, hopefully this is obvious but having done some pretty big weeks of elevation (for someone who lives in a flat area at least) my legs didn't struggle with the course and fitness wasn't an issue which meant I could focus on keeping on track.

5. Try and minimize the stresses between door to door. I booked a transfer from the airport to my hotel which cost a bit more than a train or bus but saved me hours of waiting and changing over etc and meant I had a friendly face at the airport (possibly a body builder or security person when he's not driving tourists around?)

6. Keep hydrated and keep your nutrition in check whilst travelling to the event. I took a couple of 'Performance Meals' and 9 bars to munch on and then topped up with a meal in the restaurant the night before, save having to trawl through the airport food.

Posted by Charlie Thatruns at 21:32