In the lead up to the event I'd been in Birmingham for a couple of weeks on NLP and Hypnosis training courses so managed to pop over to Shropshire (about an hours drive) for a couple of weekends. It worked in quite well. I'd been over the whole course aside from a few minor sections that had been amended to keep the route off roads as much as possible. I did take the Garmin Etrex 20 handheld gps with the updated route on although there were only a couple of points I actually got it out. There was a really well written set of directions which I read through the week before the event and also a pre marked map, I never got either of these out during the race. There were a few bits of reflective tape out on the course here and there but on the whole it was unmarked.

As for the actual race I'd woken up pretty early in the hotel and had my bag packed up and drop bags ready. I've been running with a Nathan race vest most of the year so decided  to use that but also took a Salomon waist pack just in case. Registration and kit check was really smooth as always, we were given the option of not carrying spare layers and waterproofs given the forecast provided they were in drop bags, so with that in mind I re packed and carried the waist pack with 1 bottle in and the rest of the compulsory kit and gps then left my race vest set up in the 40 mile drop bag so I could swap there.

9am start came around pretty quick and after a short briefing outside the Carding Mill Valley Visitor Cafe we were moving. I pretty much led from the start and was first into the first manned CP at 10 miles with eventual 2nd place finisher close by. The first of 4 10 mile loops would bring us back to this CP before heading along the Striperstones towards Longden Common and the pub which made CP 30 and 40 mile, There's a great view off of Corndon hill and as I was travelling so light progress felt easy, it wasn't long before I'd made a gap and started to build a lead.

After that loop we took on the Striperstones which is essentially a long ridge with a stoney path along it which was nice running before hitting some fields again and a little bit of country lane before mile 30 which seemed to arrive quite soon. I had a couple of cups of water and a cup of coke, topped the bottle up and was on my way pretty handy, on the whole the 2nd loop is quite easy going. It was warm from the start but It hadn't really bothered me initially. Kept the water dripping in although started to get very hot around 35 miles. I got to the self clip checkpoint around mid 30 miles and had to budge some cows out the way which had taken a liking to the fence post it was attached to and knocked it down. Just before Earls hill I went down into a stream and cooled off and refilled my bottle from it before a steady ascent up the hill. I didn't move all that quickly after the hill as I could feel myself heating up so just as we went into the woods I sat myself down in another stream for a few minutes and just enjoyed the cool water. I topped my bottle up again and moved on slowly through the shaded woods for a couple of km before running it back into the 40 mile point.

Arriving at the CP runners were sprawled out all over the pub garden (their 30 mile point as the loop came back to here at 40 mile before 50 mile runners headed back to Church Stretton and 100 milers headed over towards Wenlock Edge) I got a little pot of rice pudding and fruit from my drop bag and washed it down with a couple of cups of water and half an orange. I really didn't feel like any food that wasn't juicy so swapped my tracker and a few things from my waist pack into the race vest and set off out of the CP towards halfway. I don't usually stop for much time at all at CPs but spent a bit of time here getting water in and cooling down which I think was time well spent.

I ran well over to Dorringon to cross the A49 and grab an ice cream from the shop before heading off along the country lanes to the 50 mile CP. I bumped into a guy called Richard out for a 20 mile run along here (think he was 7 miles in) so I kept up with him until we parted ways after a couple of miles. I was still feeling pretty good but very warm. It's about 12 miles to the CP and it did seem to take a little longer. A bit of a drink but no food for me here and I made my way along the Wenlock loop which was partly shaded, although no real hilly bits along here I stayed at a steady pace as I had a bit of a bloated kind of feeling as if my stomach wasn't letting anything through and I could feel water sloshing around. It was about now also that I stopped lying in streams that I passed as temperatures had come down a little and I didn't want to end up staying wet once it cooled down and went dark.

Back at mile 60 and the CP I lay down and did a few stretches whilst munching down some strawberries which were the best thing I'd ever tasted at the time, I was well looked after there! (btw DID I mention how awesome all the supporters and crew were too????) I even managed a biscuit too. I set off after a cup of coke and from here it turned into a wildlife adventure along the Edge as the light began to drop and darkness arrived. All along Wenlock edge the bushes were alive with rustling badgers, foxes, rabbits, deer and rodenty looking things and the trees were bustling with owls and pigeons and bats! It was quite exciting seeing the eyes reflecting back off my torch in the darkness. It went quite quick and before long I was looking out for the 70/80 mile CP and the start of the final loop!!!

Some enthusiastic cadets were manning the CP and had some burgers and hot dogs on the stove (I declined as there was no way I felt like eating anything except custard and some fruit) before heading off into the darkness. This loop seemed to have 2 climbs which felt flat on the recces I did, but I could tell I was going uphill by now! The last part of the loop up to Flounders Folly Tower I had a brief wave of tiredness and some minor hallucinations (seeing people and hearing people following me etc) A quick moment to admire the tower before heading down the steep descent which was one of my favourite bits of the course then down to the CP again where current 3rd place was although he had made his mind up to drop out. I wolfed down a bit of rice pudding and was feeling really good at the thought of a final 20 miles to go and dawn approaching. I thought the flapjack looked really nice but could only manage one mouthful. I picked up my gloves from the drop bag and swapped the torch batteries and grabbed the mp3 player (hadn't run with it in a race for a while but it was good to take the mind off the next 5 miles) shortly after leaving the cp I was crossing a field heading to the A49 and had a strange feeling as if the ground was shaking I glanced back and caught the eyes of a herd of blood thirsty young bulls reflecting back at me, they carried on following me to the gate, probably a bit excited by a bright coloured, reflective visitor that looked like easy prey. 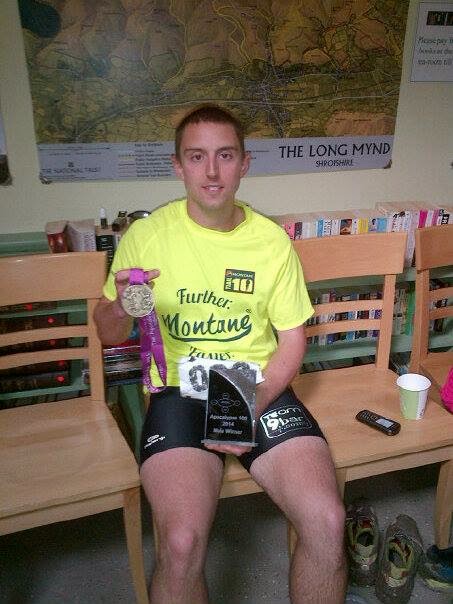 It seemed around here the tracker I had, had paused itself and didn't come back on, so I put the occasional Facebook update that I was still moving despite the tracker as I had got quite a few texts asking why I wasn't moving even at such an hour in the morning! The text support was amazing by the way! Thanks everyone!! So one CP to go I felt ok and knew the way, progressed on quite well and daylight began to emerge. A few over grown bits of fields to battle through slowed me down somewhat but kept on going until the 92 mile CP. It was great to reach here knowing that I had 10 miles or less to go. A cup of coke and a bit of a water top up and I got going once more, stomach was feeling good again just didn't feel like eating, although energy levels were fine so I just kept moving. I'd been over the last 5 miles the day before the race so knew the distances now and just kept ticking along, for some reason I wondered if I was being caught so made an extra effort to run from the farm, right back up and over the Long Mynd. I dumped what was left of my water bottle over my head and began the final mile or 2 descent down to the finish line. I felt quite relieved knowing it'd soon be over and I could get back to the hotel and sit in a cold shower.

Wendy was down at the finish with open arms and a nice big medal. Soon Richard appeared with a race nice looking trophy and after a photo I sat down for a cup of tea. I guess I stuck around about an hour before heading back to the hotel where I managed a little bit of breakfast. Thanks so much for the support! A really well organised series of events. Look out for 12 Labours and The DON coming up this year on the Beyond Marathon site!

Some things that helped me in 'the heat'... If you live somewhere hot you're probably laughing that 20 odd degrees is considered heat I know!
Linger in the shade if possible... eg cross over the road to get the shade of a hedge,
Sponge or just tip water over yourself but possibly try and keep it from dripping into your shoes and your feet getting wet.
Keep hydrated and practice drinking on your runs
Stop and rest if needed, it might cost you a few minutes there and then but in something like an ultra can make the difference between finishing and not!
Try to acclimatize as much as possible.
Adjust your race plan accordingly, I backed off the pace I wanted to run at and was glad I did!


I finally finished at 7.28 on Sunday morning with 2nd coming in around 10.18am and 3rd just before 3pm I believe. 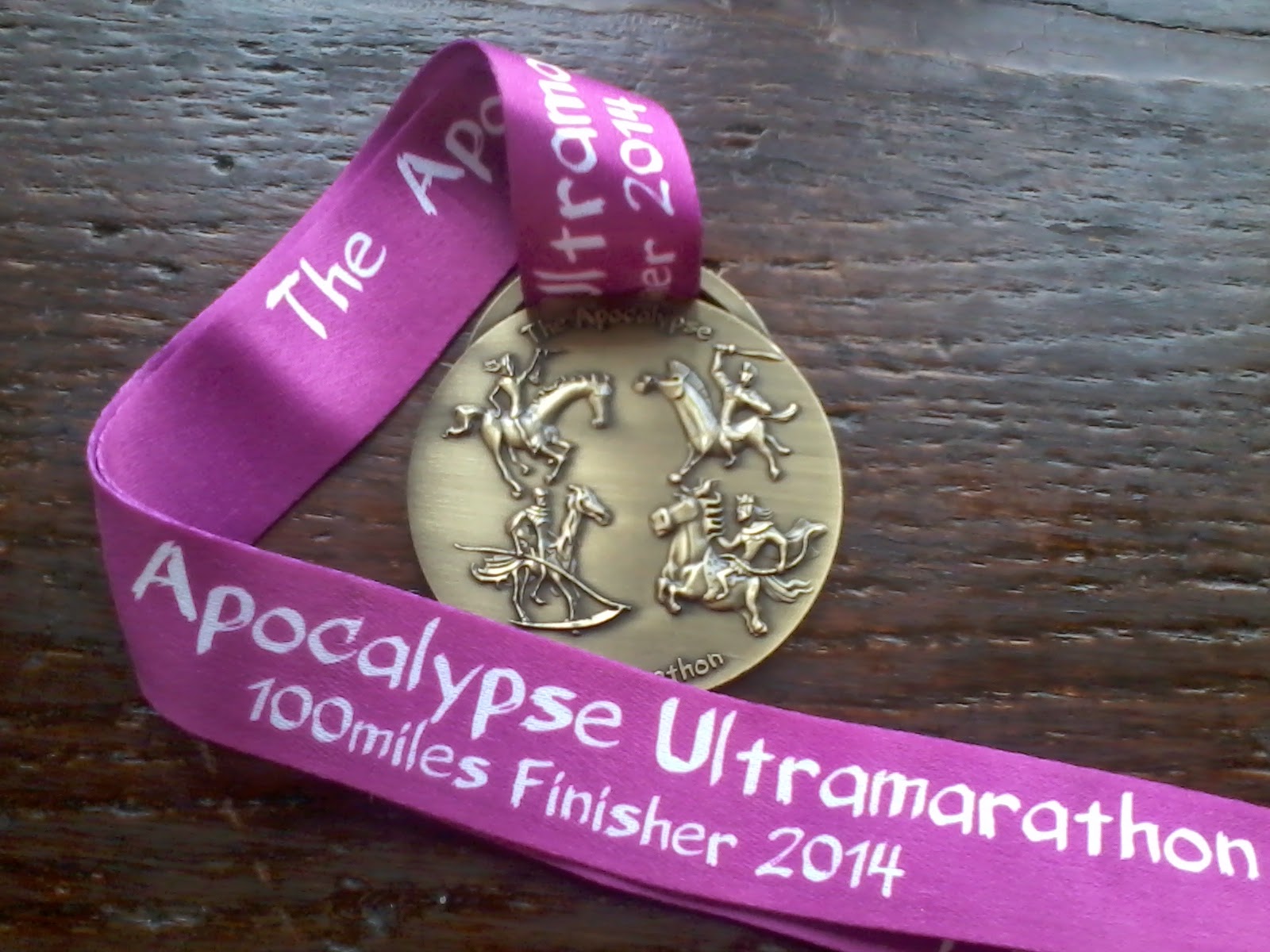 Route and results below!