Having set the course record the previous  year which stood at 3 hours 3 mins I was keen to push under the 3 hour mark! In 2014 I had focused on the race and been out to do some quicker training runs along the course before the day. This year with the race being later in the year I had to try and squeeze it in between other races and didn't give it quite the same focus... So here's how it went on the day!

I rolled up just in time to grab my number and a quick warm up and say a few hello's before we were lined up on the start and ready to go. Straight from the start me and another local runner Steve set the pace and were making light work of the gentle climb to the mast on Winter Hill. A few local celebrities like Mr Kitchin lurking around taking photos on the top too! We chatted a bit and both of us seemed quite relaxed. Normally if someone pulls along side me early on a bit of chatting soon shows up if someone is running themselves out of their depth. Steve sounded comfortable enough so I was excited that we might get some quick times this year pushing each other on! We pretty much ran stride for stride down through the second cp and then traversed along Georges Lane and over towards the third cp (there were even more checkpoints this year, really well stocked, they were everywhere, no complaints of course!) 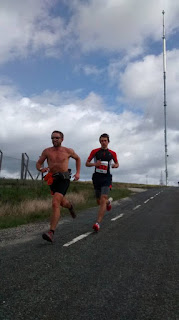 As we moved along towards the halfway point still side by side and chatting Steve had some friends out on course supporting including a guy on a mountain bike with drinks and the like. Pretty handy and kept us amused as we headed out on the out and back leg along near White Coppice, there was a slight change in route from last year due to a few signs missing so the marshals had jumped in and sorted it. Really good of them!!

So on the return leg we pass many of the top half of runners and it was great to see a good mix of smiles, determination and enthusiasm! It gave us a real boost. Shortly later Steves bike support popped up again and each time there seemed to be a nudge up in pace, it's an awesome boost seeing people you know out on the route and it made me work a bit harder to keep the pace. I had a glance at the watch and after initially feeling like we were ahead of last years pace I didn't think we were quite quick enough for the sub 3 hour at this point as we made our way along the reservoirs. A few calculations in my head and I was going to need to run a 36 minute final 10km including a 200m ascent  hmmmm..... not long later we came towards the penultimate checkpoint and I was in need of more water whilst Ste ran on with his mountain bike mate I filled up and chased on. Pulled the small gap back and we began ascending around the side of the school. I had to make a quick pit stop then tripped when I spun around and set off in pursuit again.

As we made our way up the last climb I was maybe 30 - 60 sec behind but I knew I wasn't going to be able to do the last 5 miles in 25 mins for the sub 3 hour! When I realised that I almost felt like just stopping and walking to the end. I kept running and made my way past the final checkpoint and up the last bit of climbing before cruising down towards the finish in 2nd place.

It's a fantastic local event and a generous prize fund. I had pretty much one goal... to break my course record from last year and finish in 2 hours fifty-something. I still know it's doable, hopefully the date will fall within my faster training period next time and I can put a bit of effort in to make it happen! It was great running with someone for the majority of the race. The miles literally flew by, to be honest I was surprised at the time, nothing seemed to go wrong anywhere we just hadn't run nearly as quick as last year.

The following day I headed to Scafell Pike marathon in the Lake District. I wonder if my brain was limiting me on the Saturday knowing what it was in for on the Sunday?

Next weekend I'm off to run the 0-4-0 in Teneriefe from sea level to 3817M Mount Teide and back!
After that it's the Dragons Back race and then back to Spain for AAUT!

Posted by Charlie Thatruns at 09:25