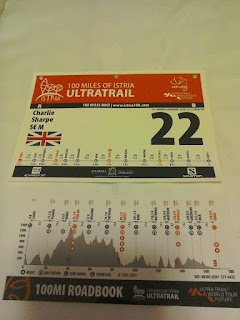 170km with 7000m of ascent crossing the Istria region of Croatia, relatively close to the boarder with Italy and Slovenia nearby. The team organising the race have got things spot on logistically and looking back, I can't really think where you could improve the event. The finish is in a town against the sea called Umag and all the registration and finish ceremonies/ meals etc are here so it makes sense to stay here and take the bus to the start on the Friday afternoon to the start. After the Northburn 100 mile last month I wasn't approaching this with quite the same focus and intensity but was fully expecting to be faster here (3000m less elevation although a touch longer) with the same kind of approach it would probably crack below the 20 hour mark.
Sooooo.... Friday there's a fleet of coaches transporting runners to the start in Labin which has an old town square and hosts the start of the race. Lots of excitement here as the locals start to line the streets to see us all off. 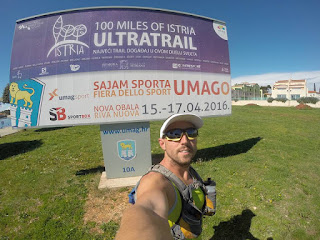 I started near to the front within the top 20 as the path narrows within the first minute or two of running. I found myself behind a small group and moved ahead after about 15 mins when the path opens out. Probably now around tenth but just cruising along steady and settling into a rhythm. The only concern I really had was using new shoes and it felt as if my calves were working harder than normal although I was running OK, just kept at it. 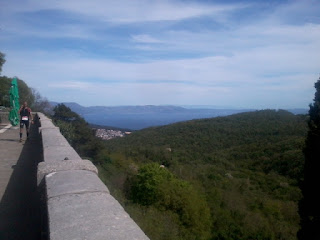 Around 20km in the first big climb up to about 1400m and with a 4 PM start it meant the front end get to see the sunset near the top of the ascent which was pretty stunning! Beautiful weather for the whole race was forecast and apart from just throwing a jacket on briefly as I crossed the highest point of the course I ran in a vest. 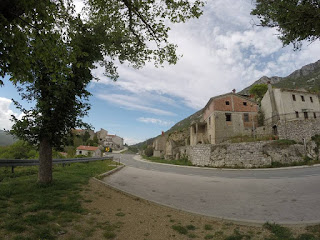 The terrain in general is quite tricky underfoot with lots of small rocks, the most tricky I found were the sections going through rocky paths with long grass growing through although some sections going through woods with roots rocks and fallen leaves were also exciting! I was getting a little bit sleepy on a section of about ten km leading towards half way, maybe something to do with it being the middle of the night. The markings were incredible, you could literally always see the next marker and would pass more than one every minute. 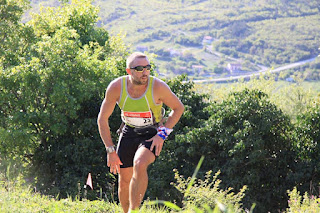 Moving through the night in near perfect conditions I arrived with eventual 3rd place about a minute ahead at the 89km checkpoint which is the major halfway ish point and has drop bags and all that kind of stuff. Changed batteries in my torch and grabbed some more gels etc to restock my pack and was back out and moving well quickly. 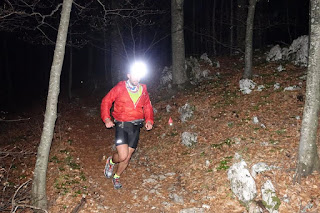 Over the next section my legs didn't feel very lively, although the second half of the course is far easier on paper, overall I didn't feel I was moving that well between 100km and the finish. There are some shorter races taking place and joining our course and during the second half I thought I must have lost about 15 places although by the finish only 2 were in the 100 mile the rest were doing the 100km and 70km events I guess! 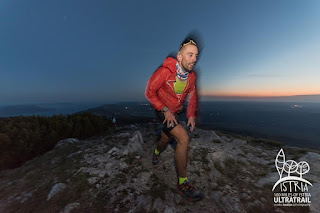 At one point I was running towards the 70 mile point and I hadn't seen a marking for about a minute! Normally in most races this isn't uncommon but having been so regular before this point I wasn't sure what to do. I decided as it  was a good track and there wasn't any obvious turnings I would carry on but checked the time and decided if nothing came up in half a km I'd go back. So half a km and I turned back... There was a runner coming towards me and he said we were OK but called someone and checked and we continued the way I had been going for about 5 minutes and the markers were back! All good i was happy to use those minutes checking the direction and it wasn't long before arriving at Hum checkpoint. 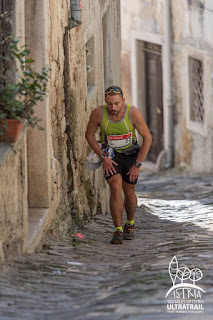 There are about 7 climbs of 400m or just less in the second half followed by a relatively easy final 15km. The day was beginning to warm up nicely as I picked off the next few checkpoints. Some beautiful old towns perched up on hills and all the volunteers were incredible! Time wasn't exactly flying by though I was enjoying the scenery and the weather couldn't be better! It wasn't long before I'd reached the final 30km and although it felt fairly slow I managed in about 3 hours taking me gently to the finish 18 minutes off 4 th position. There was a wide variety of countries taking part with 8 different nationalities in the top 10 which is great to see. Once again some fantastic organisation, everything was really straight forward and carefully planned! 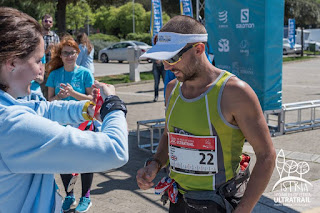 I'm essentially building towards 170km in Andorra in July which had almost double the ascent of this so simply surviving it seems like a challenging idea. Once I get out there I'll have a better idea what I'm in for but anything much under 40 hours would place the top 10 in previous years for comparison! 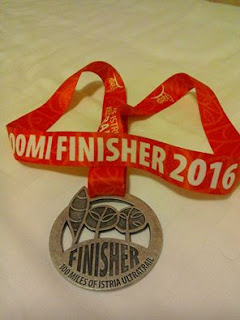 Posted by Charlie Thatruns at 12:17