Before I planned my trip to Nz I had basically shortlisted all the races that sounded worth a run, this one made it on the shortlist although I didn't really research much further than date, distance and location at that point. By chance I got chatting to a German triathlete a few days before the race who was travelling up for it. I made a quick email to the organiser and got a late entry and also managed to organise a trip to visit friends in the north of the South Island at the same time. It was a mere 7 hour drive from Wanaka to Westport the night before the race, registration was easy it was pretty quiet. I then found out that I was in a road marathon not a trail and realised I had no running shoes that were reaaally fit to wear and definitely not road shoes.... 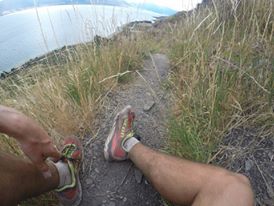 Being a late entry it wasn't really in my plan to race a marathon that weekend so opted for a steady 3 hour pace and started out pretty much last. We were bussed out to the start ready for an early start I hadn't seen a map of the course beforehand but basically we started on a road in a gorge (very scenic!!) and ran 8km inland, then hit Berlin Cafe and turned around before running 34km back to the finish in Westport.

I set out near the back, a pretty gentle first 10km in about 46 mins and had chatted to a few runners aiming for varying times from 3.15 to 3.45 even. I'd not eaten breakfast beforehand and was just running on water. Interesting how the body can adapt... Just 5 years ago running sub 4 hours was a big ask but do able. Now I'm pretty happy running sub 3 without too much effort on the road but I reached the half way point in around 1.34 according to the timing guy stood with a stopwatch shouting our times.

I'd moved through a good chunk of the field but had to make a quick portaloo stop before getting back to the run. I remember seeing some serious looking types and one particular wearing red shorts and a yellow vest who stood out purely for the bright colours. It wasn't long after halfway before I saw him up ahead. There was some sort of relay happening on the day along with a walk on the same course so looking on the longer straights into the distance it wasn't easy to tell who was doing what until I caught and passed a guy who was really enthusiastic and said I was now 3rd only 3 mins behind the lead! I was quite surprised as there is often some very competitive times around the course. The other part of me also thought that quite possibly that wasn't an accurate bit of information.... 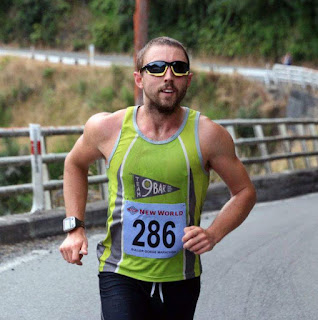 The amount of times someone either race crew, competitor or even innocent bystander has told me 'Ohhh yeah next guy is miles ahead' when they're about 1 minute ahead or even 'yeah well done, last mile' then ten minutes later someone else shouts '2 miles to the finish' Turns out shortly after the lead car that would drive us into town came up and said I was around 2 mins behind with just over 10km to go. I picked the pace up and caught sight of the leader between the various other walkers and relay people.

Putting in a sub 40 minute 10k at the end was enough to pass the leader around 2km from the finish as you hit the long bridge into town and I finished up almost 1 minute clear in a perfectly timed 2.59 and some seconds.

There is a big marquee and entertainment on throughout the afternoon, I hung around for about 6 hours to wait for the prize giving which was very generous and also received a very large trophy for the overall win. Definitely worth a look if you're after a challenging road marathon, there were a few undulations, probably quite hilly compared to your average road marathon although after recent training I'm moving strong in the mountains it felt pretty fast to run on the road and not gravel or trail for a change. 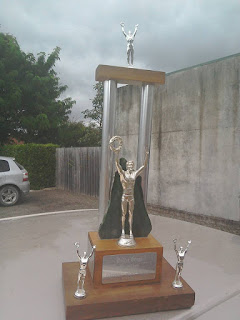 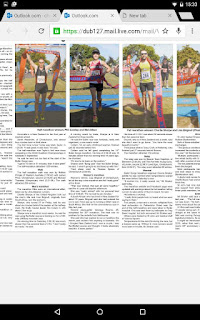 Posted by Charlie Thatruns at 00:32