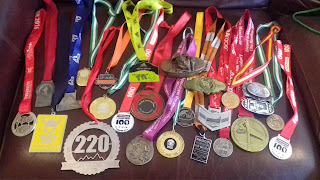 MINDSET
I'm not going to take you on a magically journey of self discovery but stick with me a moment.
So my first 100 mile was going to be the Conti Thunder Run in 2011 but for some reason about 6 weeks before I decided to enter the UR 100 mile at the last minute in June.
Now I'd done a couple of back to back marathons a 50k then a 50 mile and a 12 hour race but then I got run over whilst cycling!!
I wasn't able to run without pain and I was told to do nothing for 6 weeks (which I interpreted to mean go out on the bike instead, I couldn't stand up and peddle but sat down and in easy gears I could roll along) I did a couple of easy runs after about a month then entered the 100 mile with the plan to basically walk with some odd bits of running slowly. Set out right at the back and pretty much was the back runner until the later stages, everyone I overtook was dropping out.
It wasn't exactly plain sailing... I had made no plan for the race at all and had no idea of the route or what was really involved, I lost my jacket and head torch somehow so literally did the whole night in the dark with no light, and it rained for most of the night, I had a spare poncho and just toughed it out.
About the only good news was that I made it to the finish and didn't have any injury issues apart from a dead mobile phone from all the rain. Anyhow..... What got me through this whilst everything around me went wrong was my mindset. I was determined to keep moving and therefore I would eventually reach the finish. How hard could it be?
Nowadays I am much stronger mentally but I also have solid race plans and good knowledge of my ability. The mind is focused on how hard to push myself when it gets tough.
I've put mindset first because no matter how fit you are, or how much fancy equipment you've got.... If your mind isn't in it your body can shut down and give up in no time 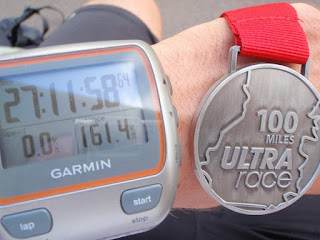 Posted by Charlie Thatruns at 22:35